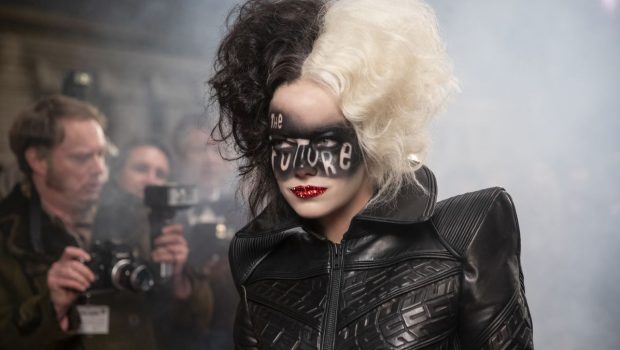 Poor craftsmanship and a clumsy script undermine Disney’s latest origin story. The recent flurry of supervillain movies, including Maleficent (2014) and Joker (2019), is deliberate and political. The films result from people pursuing logic and reason in an unjust world. After September 11, Trump’s presidency, and COVID-19, there is clear determination to add transparency to pop culture. It is why countless videos online attempt to explain films and television shows and why superhero movies remain overly prevalent.

People crave safe entertainment to shield themselves from life’s uncertainty. Unfortunately, Cruella offers no such closure. Instead, this attempt to revisit 101 Dalmatians (1996), where Glenn Close relished Cruella’s insanity with aplomb, is a colossal misfire. The prequel explores Cruella’s youth but leaves us asking who this dreck was made for and why does it make as much sense as a deranged Trump Tweet.

The messy, undisciplined narrative contains an assortment of story threads but minimal engagement. The first chapter hurriedly details the childhood of Estella (Tipper Seifert-Cleveland) who constantly fights with other children because she is different. After being expelled from school, Estella and her mother move to London to pursue the girl’s design talents. However, a stopover at a party proves fatal. Estella ignores a request to stay in the family car, which leads to her mother’s death. Would you believe Dalmatians are involved?

Estella carries her guilt into her adult life (now played by Emma Stone). She lives in a small London flat in the 1970s with two friends from her childhood, Horace (Paul Hauser) and Jasper (Joel Fry). They help her reach her dream job in a department store only for her to be stuck cleaning toilets. A chance encounter sees Estellar hired by a powerful fashion designer, the Baroness (Emma Thompson). She holds a medallion pivotal to Estella’s childhood. Attempting to reclaim the stone sees Estella morph into the deadly Cruella de Vil.

Australian filmmaker Craig Gillespie’s scattered direction leaves too many questions unanswered. Gillespie has made many different types of Hollywood films, including bizarre indie titles (Lars and the Real Girl, 2007), horror features (Fright Night, 2011), and sports films (Million Dollar Arm, 2014). I, Tonya (2017) is arguably his best and rawest film. It is curious that an experienced director cannot determine who his audience is. For example, Cruella’s thoroughly unimaginative soundtrack, including ‘Sympathy for the Devil’ and Nina Simone’s cover of ‘Feeling Good’, attempts to keep adults awake. Avenging a parent’s death is also a pivotal but lean through-line for adults.

However, the story’s dark edges never transcend Cruella’s adolescent form, which undermines the film’s dramatic heft. For example, Gillespie fears young viewers’ impatience and breathlessly roars through the prologue. The choice proves fatal because the exhausting pace sees the film lumber sluggishly over the two-hour mark. Gillespie also assumes Cruella’s audience is unintelligent. The early scenes are pointlessly narrated by Estella’s intrusive voice over, which describes the action before our eyes. The retro soundtrack then lands with a similar thud. The cliché track selection needlessly complements the images in terribly obvious, clunky fashion. 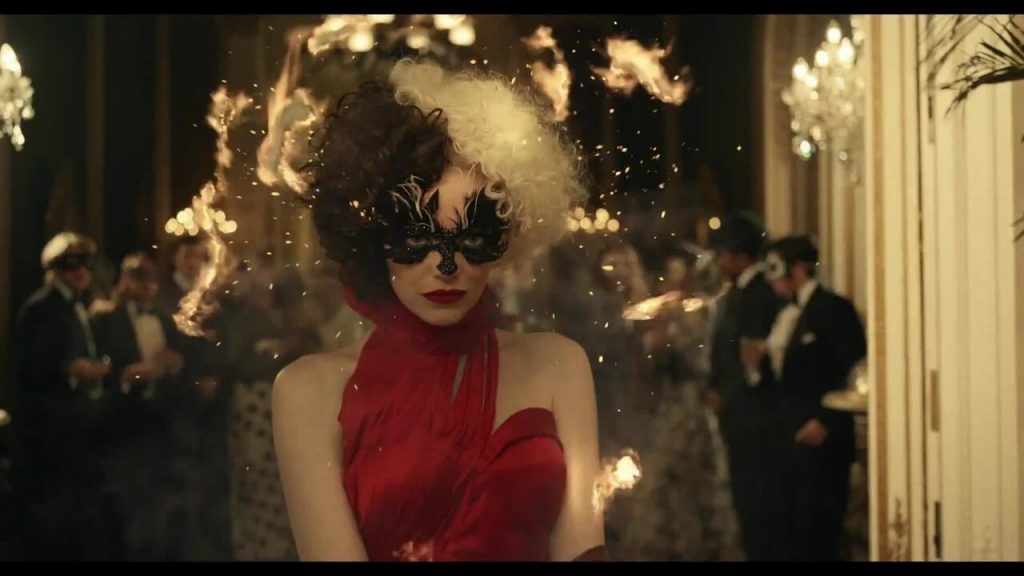 The rest of Cruella is haphazardly stitched together with action set pieces and awkward tonal shifts. In one crucial scene, Gillespie shoots Emma Stone in an extended close-up. The smeared mascara running down her face amplifies the intensity of a monologue about Estella’s identity. Yet in the next scene, Estella dons a fake moustache as she ploughs a van through a police station. Later, Estella is tied up and nearly burnt alive in her apartment. One could suffer violent whiplash from the film’s wild tonal changes.

Although credited with the screenplay, the input of writers Tony McNamara (The Favourite; The Great) and Dana Fox is scarce. Action set pieces and retro songs dominate proceedings over witty writing. Meanwhile, large sections feel like they were shot without a polished script. The story is credited to three separate writers, which might account for the lack of focus. Estella’s transformation fumbles between heists, revenge quests, sabotage missions, and an eye-rolling twist pulled from somewhere. The dialogue is also leaden, particularly when a revelation occurs and is then repeated in the next scene. Every idea is continually underlined because subtext is so last century.

Despite Stone’s comic presence, Cruella offers no laughs. The script relies too heavily on slapstick gags, such as animals causing chaos at parties and people falling over drunk or into cakes. None of this should be taken too seriously but a trace of logic would not have gone astray. While living rough in London, Estella somehow has the time, money, and resources to create a series of elaborate fashion shows to steal the Baroness’ limelight. One of these includes a full-blown concert. Even the fashion world would find this incredulous. Perhaps in a flash of self-awareness, the film’s lone highlight is a dress train mirroring a garbage truck. 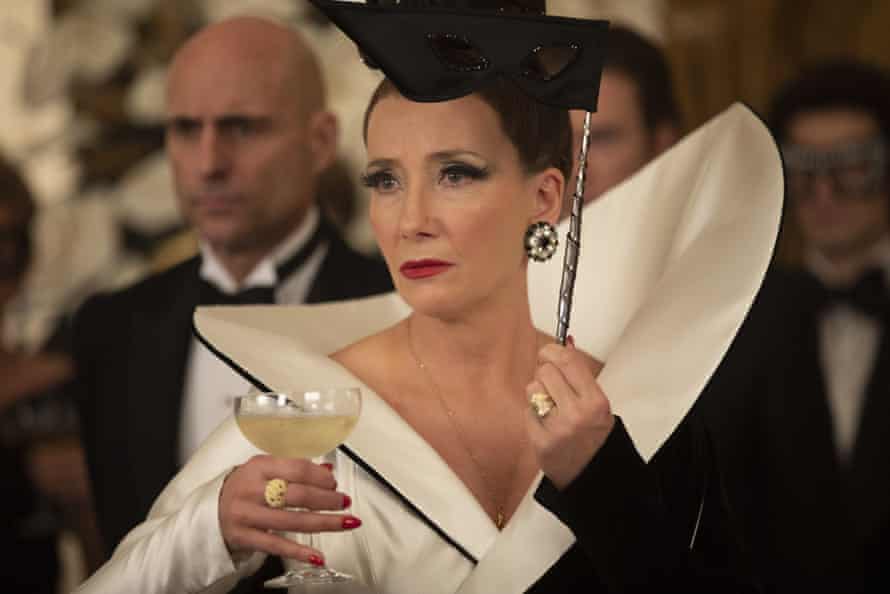 The actors are too talented to be wasted on such superficial material. Emma Stone’s normally reliable comic timing feels muted by the film’s shambolic form. Her performance contends with a sloppy cut that sees Estella’s persona change overnight. Emma Thompson relishes the Baroness’ stiff-lipped, impatient demeanour. Yet she is written without depth to counter her blunt wickedness. It recalls the character Thompson played in Late Night (2019) minus the complexity. Paul Hauser and Joel Fry’s roles are barely distinguishable. Estella’s mistreatment of them leads nowhere. Mark Strong is wasted as a henchman used solely to explain the silly plot twist.

Cruella sinks without a compelling plotline to encompass tension and big laughs. The story accelerates through lousy set pieces and the actors fail to enhance the adolescent humour. Disney’s timing and creative direction are misguided. The company attempts to bring closure and reason while being indecisive about its target audience. The film is about unmasking your enemies, avenging childhood losses, and building powerful empires. It is supposed to reflect ideas of empowerment and individualism. Yet Gillespie is completely indecisive about how seriously he wants to take this nonsense. If it eludes the director, what chance do we have?