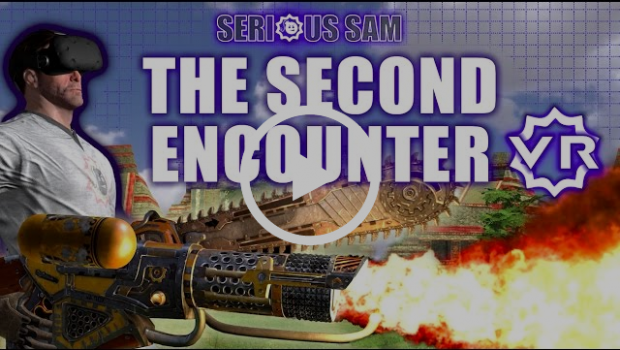 Croatia – Chaos incarnate Croteam and professional hype-people Devolver Digital have launched Serious Sam VR: The First Encounter and Serious Sam VR: The Second Encounter on HTC Vive and Oculus Rift via Steam. Keen on defying normal release timelines, Croteam told us to hold their beer as they paired The First Encounter’s Early Access departure with a surprise debut from its relentlessly exhilarating follow-up The Second Encounter. Both titles are available for 25 percent off during their launch window.

Cleave through beasts with an over-the-top collection of firepower, including the Chainsaw, Cannon, Minigun and trusty staples like the Shotgun, Colt and Sniper Rifle. Keeping targets in your sights is as simple as pointing and shooting … so long as you can hold a steady aim throughout Serious Sam’s blazing pace of action.

The monstrous forces in both Serious Sam VR: The First Encounter and Serious Sam VR: The Second Encounter are led by Mental, a god-like being stirred from hibernation by the human race’s incessant curiosity with an ancient alien technology. Hellbent on crushing all life, Mental’s army devastates all forces in their path with the exception of Sam ‘Serious’ Stone, a lone EDF general leading a resistance as the galaxy’s last hope of salvation.

VR socialites can enlist up to 15 friends to help them blast through cooperative modes, including full multi-level campaigns, or turn acquaintances into rivals across a wealth of competitive multiplayer game types. Earn bragging rights in the hunting-themed showdown, Beast Hunt, the fight to steal and hold a score-boosting item, My Burden, or classic match types including Capture the Flag and Instant Kill. Keyboard and VR-wielding sharpshooters can face off via cross-platform battles.

To get the jump on Croteam’s next outing, follow @Croteam. To discover the rest of your new favorite games, follow @DevolverDigital.