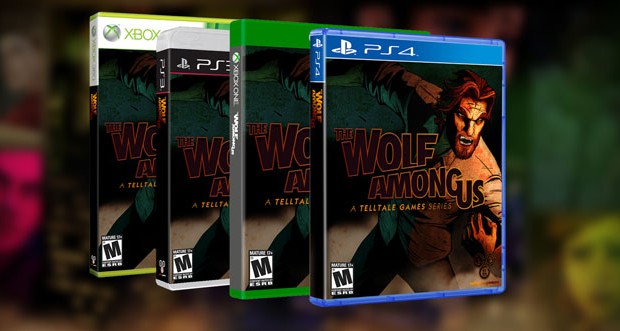 “We are so proud to be a part of the rich tapestry of the FABLES universe, bringing that world’s darker takes on familiar fairytale characters to an interactive medium,” said Kevin Bruner, President and Co-Founder at Telltale Games. “In bringing The Wolf Among Us to PlayStation 4 and Xbox One formats, as well as the recent Android release, more players than ever can now experience being Sheriff Bigby Wolf and take the fate of Fabletown into their own hands.”

The Wolf Among Us: A Telltale Games Series has been met with critical acclaim since its premiere leading to its finale this July, when GameSpot.com heralded the series as a 2014 Game of the Year Contender. The series was nominated in five categories in the 2014 Golden Joystick Awards, including Game of the Year, Best Original Game, Best Audio, Best Storytelling, and Studio of the Year for Telltale Games.

Nerdist.com called the series upon its conclusion, “… a tour de force of sex, lies, murder, deceit, and, ultimately, hope. The final moments of the series are guaranteed to be the subject of heated comment section debate for months to come and can totally shatter your perception of everything you’ve come to know.”  Also in their review of the season finale, GamesBeat awarded the episode a 9.5 out of 10 score, saying “Cry Wolf ends Telltale’s Fables series on a memorable and effective note… It’s everything a finale should be.”

Official Xbox Magazine awarded ‘Cry Wolf’ a 9 out of 10, calling it “a spectacular end to an excellent series,” while Joystiq also gave the episode a 9 out of 10, saying, “The Wolf Among Us has been consistently excellent from start to finish.”

FABLES: THE WOLF AMONG US, a new digital comic based on the game, is set to debut on December 10th and will be available for download from digital comic retailers including Amazon, comiXology.com, Google Play, iBooks, and Nook Store. Print issues of the comic will hit shelves in January 2015.

Set prior to the events seen in the first issue of the FABLES comic book series, The Wolf Among Us: A Telltale Games Series puts players in the role of Bigby Wolf, a man once more infamously known as The Big Bad Wolf.  Now the sheriff of a hidden community in New York City, exiled from the land of fairy tales, Bigby is tasked by the bureaucrat Snow White to keep order within a society of mythical creatures and characters trying to remain undetected in the world of the mundane.  From a chain-smoking member of ‘The Three Little Pigs,’ to a slippery Mr. Toad itching for his next wild ride, The Wolf Among Us examines the lives of beings straight from the pages of myth and lore, now trying to survive on the meanest and most run-down streets of New York.

The Wolf Among Us: A Telltale Games Series is licensed by Warner Bros. Interactive Entertainment on behalf of DC Entertainment, and is rated ‘M’ (Mature) for Blood and Gore, Drug Reference, Intense Violence, Partial Nudity, Sexual Themes, Strong Language, and Use of Tobacco by the ESRB.