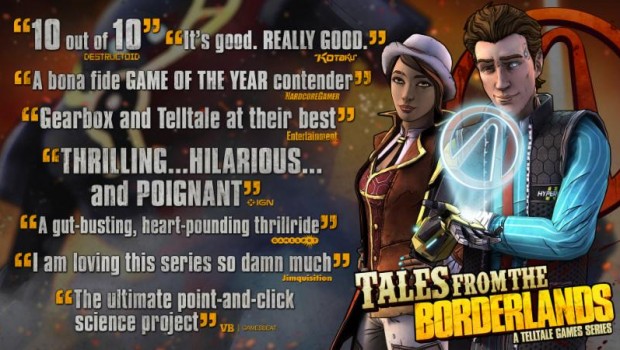 Today we can share the final trailer for the critically-acclaimed ‘Tales from the Borderlands’ series, as it reaches it’s season finale conclusion starting this Tuesday October 20th on PC/Mac, PS4 and PS3; October 21st for Xbox One and Xbox 360; and on October 22nd on iOS and Android-based devices.

In the final episode of the season, The Vault of the Traveler, all hell breaks loose. Jack is now in control of Helios’ systems, and he’s ready to reclaim his rightful place as king of Hyperion (with or without you). It’s a mad dash to get out of the chaotic space station alive, as everyone scrambles to grab the final Gortys piece and high tail it back to Pandora. Can you guide our ragtag team through perilous corporate dangers in hopes of getting some sweet alien riches? Loyalties will be tested, secrets will be revealed, and explosions will be in large supply in this climactic chapter of Tales From The Borderlands.

GamesBeat awarded the season premiere of Tales from the Borderlands a 96/100 score, calling it, “A hilarious knockout,” adding, “Zer0 Sum stands tall as the ultimate point-and-click science project: combine the beloved Borderlands lore and setting with the shining vision of an artistic studio, crank up the heat, and enjoy.” GameSpot awarded the episode a 9 out of 10 score, calling the episode, “…a beautiful new twist on the Borderlands experience with loveable leads and breathless action sequences.” Destructoid also awarded the game a 9 out of 10 score, saying, “Telltale really knocked it out of the park with this one,”  later adding, “…this might be the funniest Borderlands game to date.”

In their review of Episode 2, Polygon praised writing that “crackles with the sort of life and energy that drives the best comedy,” while IGN said “it constantly oscillates between thrilling action scenes, hilarious back-and-forth banter, and some poignant character moments… I consider myself completely on board for Telltale’s wild ride.” Entertainment Weekly also declared the season so far as one of their favorite games of 2015, saying, “do not miss one of year’s most engaging and hilarious rides.”

Tales from the Borderlands – Episode Five: The Vault of the Traveler – is rated ‘M’ (Mature) for Violence, Blood and Gore, Suggestive Themes, Language, and Use of Alcohol.