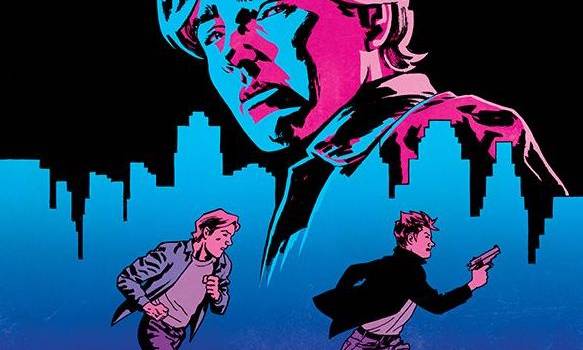 Summary: In a breather from the main story, stores get robbed, darker impulses are awoken, and Ms. Pac Man dies.

People are one hell of a drug.

The Story: Ricky Lawless is a petulant screwed up child.

Background: A side story that has heart, drugs, and stupidity.

Summary: Leo And Ricky decide that they are going to rob the arcade (which may not seem like a lot now, but in the 1980’s, those things were gold mines). Leo has some trepidations about the robbery, mainly the idea that the cashier forgot something and decides to come back. Ricky (being the stand-up reasonable fellow he is), calls Leo a pussy and drops into the bathroom through the ceiling tiles. Ricky wants to lay some the games, but Leo keeps him focused.

We then hit a flashback to earlier in Leo’s day. A fellow named Ivan is begging Leo’s dad (Tommy) to be let in on a job. Tommy’s too smart for this though and gets Ivan to all but admit that he’d used drugs recently and despite Ivan’s protests over wanting to EARN his money, Tommy shuts him down.

Leo tries to convince his dad to help Ivan (who is apparently his Uncle), but his dad in so many words forbids Leo to help Ivan. Leo’s still not happy about this. The three of them used to go to the fair, pick-pocketing people and then celebrating with pizza. But Heroin had put a damper on things, His dad became much harder to deal with. He missed the old days.

So that brings us back to the arcade robbery. He’s doing it to help his uncle. He gets to the cash box… and there is only $600 in it. When Ricky finds out, he loses his mind and decides that they are going to steal the entire Ms. Pac Man box.

Leo knows this is a bad idea, but Ricky decides to remind him what Tommy had said about risk versus reward. They start loading the machine into the van when a guard finds them. Ricky drops the machine, which shatters the screen. Ricky then jumps the guard and gets a flashlight to the face. Ricky’s gun drops and after a moment of hesitation, Leo grabs it.

Now here’s where it gets interesting. Instead of just shooting the guard, Leo tells him to give his pants or HE WILL shoot him. The guard complies and the two bolt.

Leo dumps the gun and tells Ricky to piss off (he uses harsher language), and we end with the realization that Leo did want to shoot the guard, and that scared him more than actually holding the gun.

Ricky Lawless is a mess of a human being. Whatever happened to that kid who protected that girl from his father when she wanted to talk to him about the comic book? E’s now just an annoying brat who happens to be jealous of his father’s hot and smart girlfriend. Which brings up another point: there was no Teeg or Jane in this issue at all. That’s not really a big deal, but I find it interesting that we are approaching Teeg’s death and now here’s an issue with him in it at all.

This issue is really all about Leo and love he has for his uncle. He loves Ivan so much (possibly more than even his father) that he is willing to disobey his father, who is basically mob boss. But let’s dive a bit deeper, because while Leo means well, he is actually an enabler.

The book makes it very clear that Ivan is still using drugs. He’s asked flat out by Tommy and he can barely dodge the question. He means well, but he’s basically killing his Uncle. The more money he gives him the more money he’s going to spend on getting high. Enablers 95% of the time don’t even know that they are doing anything wrong.

Leo has planned this robbery out meticulously and here comes Ricky Lawless. In fact, you could call Ricky Leo’s drug. Leo knows that Ricky’s idea to jack Ms. Pac Man is a terrible idea, but a little prodding from Ricky and he gets stupid.

The gun scene provides an interesting little tidbit of insight. Leo’s never killed anyone or much less shot anyone but having a gun in his hand potentially makes him more dangerous than Ricky himself. To Leo, killing someone would have been so easy. One. Little. Pull. And that guard could have been dead. That scares him more than everything.

I do wish Brubaker would do an actual letter page, not just one or two of them. Being able to communicate with readers is important. That being said, the back matter is fantastic as always. Yet another must-read from the mind and pen of Ed Brubaker.