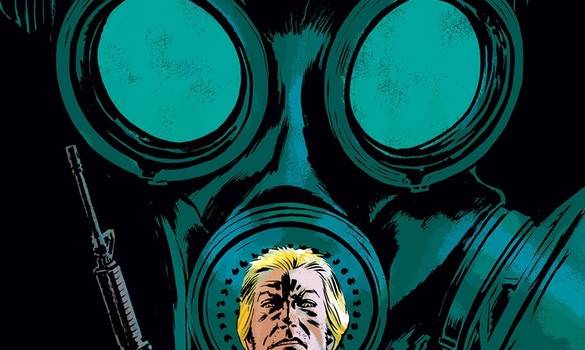 Summary: The team score's, Jane opens the door, and Teeg is more than likely going to hit the floor.

The Story: Teeg starts to slip.

Summary: Before we get started, this review is going to be slightly different. The summary is just going to hit the basic plot points of the issue. The final thoughts are going to be significantly longer.

We open with Teeg leaning against a wall and smoking a cigarette. Something doesn’t feel right to him. He’s at a pro wrestling show and his group is about to hit the cash office. Then he notices that security is there in. different configuration then what they were presented with.

We get a few flashbacks of the group planning the heist and setting up the arena for trouble (think Ocean’s 11 style, but a lot darker and seedier). Of course, Jane plays the diversion. Who wouldn’t be distracted by Jane? The heist goes off and just before they get away, Teeg decides to straight up murder the inside man for giving bad information.

The group goes their separate ways and Teeg and Jane head home. After a quick make out session in the garage, Teeg heads inside…but the window is open which he knows they locked. He then turns around to see Dan aim a double-barreled shotgun at him. Dan fires and the issue ends.

There is a series of scenes in Goodfella’s that show how Henry Hill’s life has started to degrade after he starts moving drugs. Everything was so simple in past scenes, but now he’s got to go pick-up people, cook dinner, move drugs, finish deals, and navigate his private life. Things are chaotic.

That’s where Teeg is now.

At the beginning of the wrestling match, Teeg lets him mind wander. He actually thinks of what would happen if it was just him and Ricky at the match. He imagines eating popcorn and cotton candy and giving Ricky some beer (it’s Teeg, this shouldn’t be surprising). Teeg really does love his kid, but he may be the worst person in the world at showing it. He longs for simpler times, but the life of crime keeps drawing him in.

His murder of the inside man is abrupt and unnecessary, just like Karen duping Henry’s drugs down the toilet. Both acts were meant to be helpful, but only lead to more difficult and challenging consequences. Henry’s drug is cocaine (or possibly heroin, but regardless it’s of the hard persuasion) and Teeg’s drug is Jane. When he walks into Dan attempting to murder him, he’s finally hit rock bottom. Now it’s time to see the fallout and Teeg is going down one way or another.