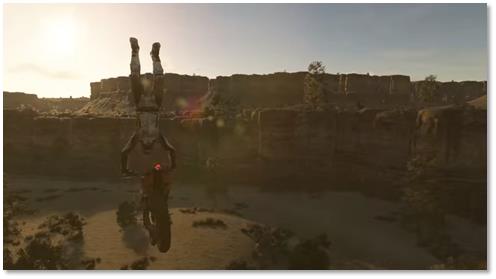 SYDNEY, AUSTRALIA — April 21, 2016 — Ubisoft® has announced that a new mode, Stunt Races, is now available in the latest update for The Crew® Wild Run. Starting today, players will be challenged to perform tricks and stunts with their bikes on specialized tracks. Time and skill will be needed to reach the highest score.

Players will put their skills to the test in off-road races, where they’ll have to complete a maximum number of stunts while hitting all the checkpoints as quickly as possible. To score, challengers put their talent on display and show off all their tricks – from 360s to front and backflips. To help them perform the most impressive stunts, several jump ramps are located along the course. Style and timing are both key to mastering Stunt Races.

Stunt Races are available in “The Summit,” and are only open to Dirt and Raid motorbikes. Along with the Stunt Races, this extensive April update also introduces the Save & Share feature for the “Freedrive” and “Speedtrap” challenges. Players are now able to create and save up to 10 challenges. Using their unique ID, they can then share them with other players in the game and via social media.

The update also includes new video tools that let players further express their creativity by tweaking weather effects and by taking control of new cameras and points of view.