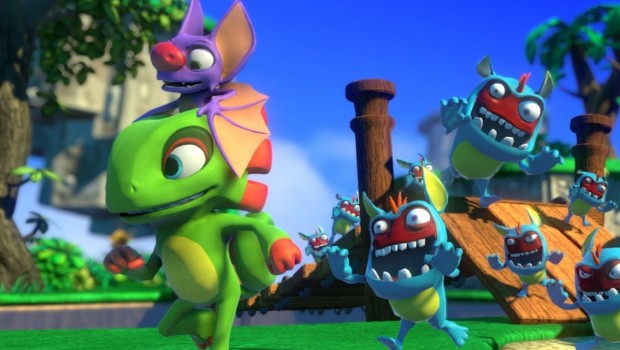 PLAYTONIC GAMES, a new development studio formed by the creative talent behind renowned adventure series such as Banjo-Kazooie and Donkey Kong Country, today launched the Kickstarter campaign for YOOKA-LAYLEE, an all-new 3D platformer coming to consoles and PC!

PLAYTONIC was formed in 2014 by veterans of Rare Ltd, including Steve Mayles, creator of the beloved Banjo and Kazooie characters, and Chris Sutherland, the software engineer responsible for more than two decades of iconic games. Between them, the seven-person PLAYTONIC team has over 100 years of combined experience working on blockbuster franchises.

YOOKA-LAYLEE (previously ‘Project Ukulele’) will be released in 2016 and star the charismatic new heroes Yooka and Laylee. Using an arsenal of special moves like Yooka’s tongue grapple and Laylee’s sonar blast, players will explore – and expand – gorgeous 3D worlds filled with collectibles and secrets to discover.

The highly-anticipated project will feature worlds crafted by the artists behind the genre’s most beloved classics, plus a dream soundtrack created in collaboration with legendary composers David Wise (Donkey Kong Country series), Steve Burke (Kameo: Elements of Power) and Grant Kirkhope (Banjo-Kazooie series).

PLAYTONIC is using Kickstarter as a means of both expanding the scope of YOOKA-LAYLEE and bringing it to more platforms. The game is currently planned for release on PC, Mac, Linux, PlayStation 4, Xbox One and Wii U, with release timings dependent on the success of the crowdfunding campaign.

“When we first announced our project earlier this year it was as much about gauging interest from fans as anything, and it’s fair to say that the response has been massive,” said Gavin Price, managing director and creative lead at PLAYTONIC.

“Until now our development has been self-funded, but Kickstarter presents us with the amazing opportunity to deliver YOOKA-LAYLEE at the level of scope and scale that fans demand – and on their games platform of choice. Our team has decades-worth of ideas that we hope we’ll now finally have the resources and freedom to bring to reality.”

PLAYTONIC need your help to bring Yooka and Laylee to life. Please check out and support their Kickstarter campaign here.