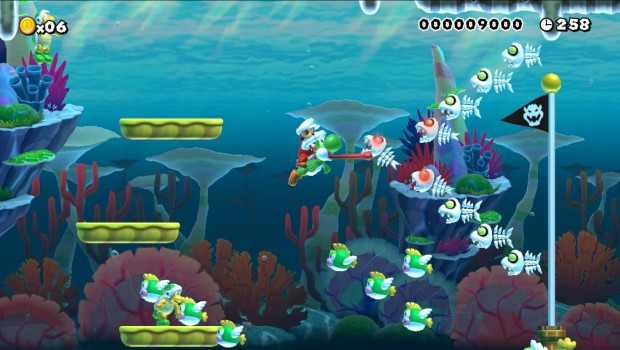 CREATE, SHARE AND PLAY A NEAR INFINITE ARRAY OF SUPER MARIO LEVELS WITH SUPER MARIO MAKER FOR Wii U – OUT TOMORROW!

Celebrate the 30th anniversary of the Super Mario Bros. series by creating and sharing your Super Mario levels with players around the world

11th September 2015 – The Super Mario Bros. series arrives on Wii U tomorrow in the shape of Super Mario Maker, the game that lets the imagination of fans run wild by bringing their very own Super Mario levels to life. To date, the Super Mario series has sold more than 310 million copies globally, with Mario, one of the world’s most recognisable entertainment characters, at its centre.

With the release of Super Mario Maker, friends – for the first time ever – can have fun playing through Super Mario levels they create for one another! With the game containing a toolkit packed with iconic Mario enemies, items and areas at their disposal, fans can share their creations online, while checking out and rating an almost limitless supply of levels constructed by fellow players from across the globe.

Reviews have been pouring in for Super Mario Maker ahead of its launch to fans around the world:

Game Informer – 9/10 – “…it already feels like the complete, 2D Mario creation tool we’ve been dreaming up since the first time we bounced off a koopa’s shell”

Aside from the game releasing at retail and on Nintendo eShop for Wii U as a standalone product, there are a range of other purchase options for fans who want to get involved with the level-creating fun:

The Classic Colours Mario amiibo from the Mario 30th Anniversary Collection will also be available on its own from 12th September, while the Modern Colours variant will go on sale from 24th October. Super Mario Maker releases just in time for a special landmark on 13th September, when video game fans from all over the world will be toasting the 30th anniversary of the Super Mario Bros. series. With three decades having passed since the Japanese release of Super Mario Bros. in 1985, and Mario having traversed hundreds of memorable levels and defeated the dastardly villain Bowser on countless occasions, fans can check out some classic Mario moments over at the Super Mario Bros. 30th Anniversary website.

Meanwhile, none other than the creator of the Super Mario series himself, Shigeru Miyamoto, has been helping clear up some long-running fan debates in his own inimitable way in a “Mario Myths with Mr Miyamoto” video.

Whether it’s littering a level with multiple Bowsers, transforming Mario into other Nintendo characters such as Pikmin, Wii Fit Trainer or Link using an in-game Mystery Mushroom item, or creating custom sound effects to insert into a level, with Super Mario Maker it’s the first time in 30 years that fans get to write the rules! Releasing this Saturday, fans picking up a copy of the game at retail can even learn more about the boundless possibilities in the game by perusing a Hardcover Artbook* coming with their copy of the game. For more information on Super Mario Maker, please visit the game’s website.