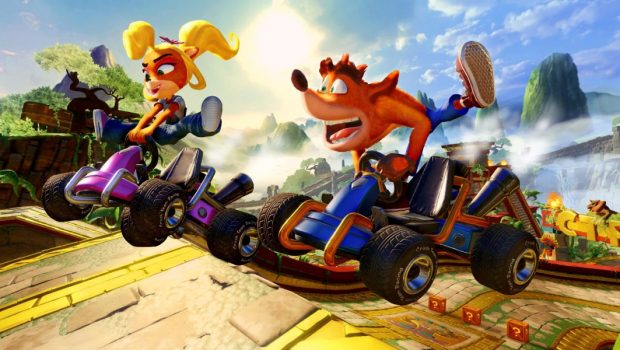 Summary: Crash Team Racing: Nitro-Fueled proves that Crash can still keep up with other mascot kart racers, even twenty years on.

It’s N. Sane to think that just three years ago Crash Bandicoot had faded into obscurity. After developer Naughty Dog published their final game, Crash Team Racing, the series gradually declined in popularity and quality until the series became defunct in the late 2000’s. Enter the N. Sane Trilogy- the remake of the first three Naughty Dog titles- and Crash is suddenly as big as ever. It was only natural that the last of the Naughty Dog quartet returns with it, and for good reason. Crash Team Racing is the original rival to Mario Kart– and for its time it could be considered even better. But what made Crash Team Racing so endearing in 1999? Can it still compete with modern kart racers today? Let’s find out! 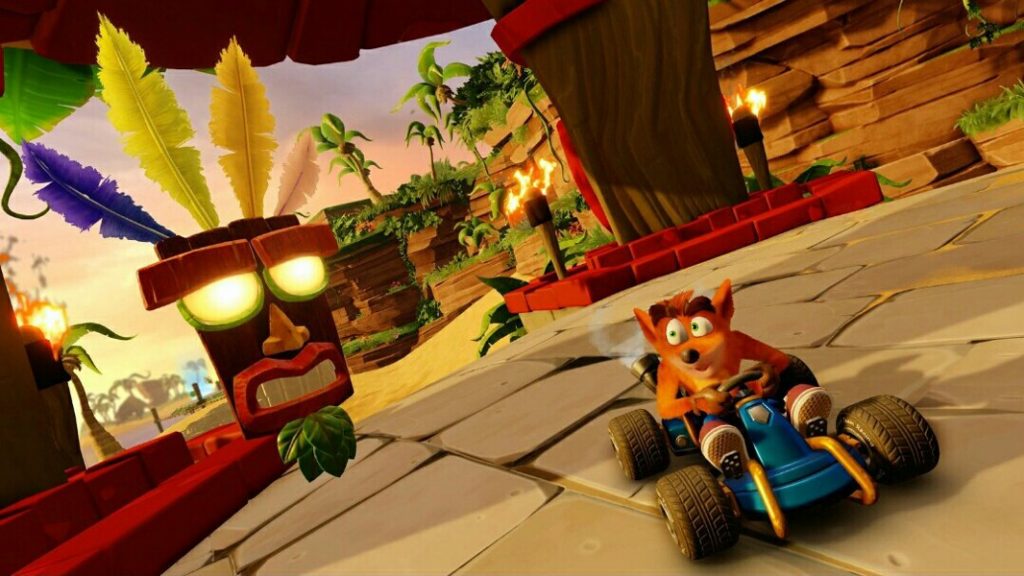 Let’s briefly summarize what CTR is about. It’s a kart racing game where you have a bunch of characters from the Crash Bandicoot franchise, and you hurl powerups at each other as you frantically drive three laps around a densely designed track. There are eighteen tracks in all (4 cups, 4 races each, plus two extra courses), each with their own unique themes and obstacles.

Now let’s describe what sets CTR apart from the rest. The game has some complex driving mechanics that reward skilled players and feel incredibly satisfying (though the game is still forgiving enough for beginners). The game has a very unique approach to drifting and maintaining your speed boosts. Wumpa Fruit can be collected on the tracks to speed up your kart and power up your powerups, making them more potent than ever. The game incentivises stylish racing by granting speed boosts for time spent getting air from ramps, and even grants you full control over your trajectory in mid-air. CTR makes you feel amazing when you pull off tricky shortcuts, and slight miscalculations can always be re-adjusted, this game is an absolute delight to control and Beenox have done a wonderful job keeping the game faithful to the Naughty Dog original. 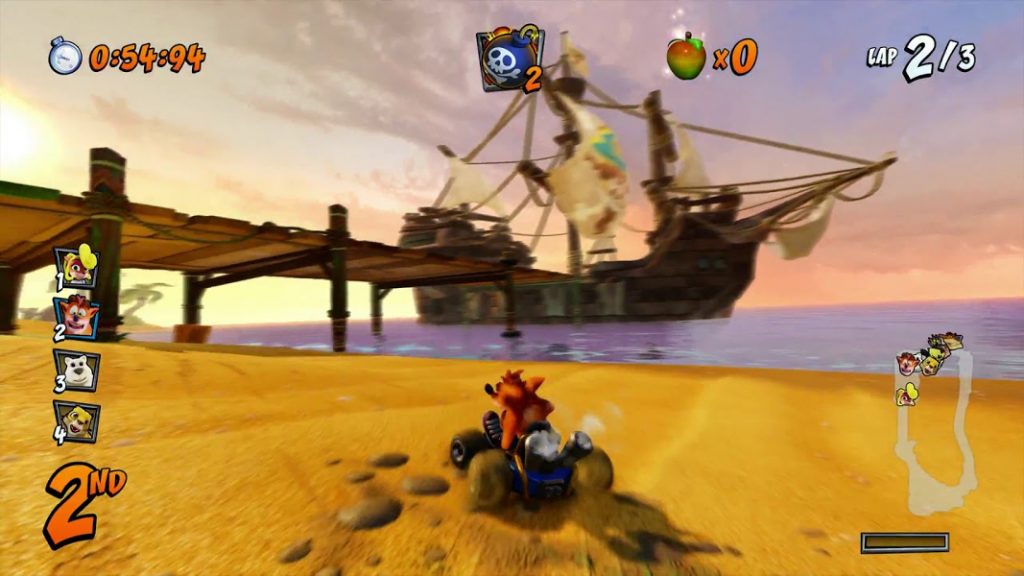 The game has a bunch of unique game modes, like the fully-featured Adventure mode. CTR one-ups the competition by adding a story to the game that involves exploring a hub world and taking on races to become the world’s fastest racer to compete with the game’s antagonist Nitrous Oxide. It’s not just about winning races- you can also obtain collectables by replaying races with certain objectives in mind, like collecting the letters C, T and R before winning, or just getting a good Time Trial score. More than this, CTR simply bleeds the kind of punchy 90’s characterisation that the Crash series is known for.

CTR fans, rest easy knowing that the entirety of the original CTR is held intact and faithfully recreated with gorgeous HD visuals and wonderfully modernized renditions of the sountrack (but you can even switch to the original game soundtrack if you prefer it). Every track from the PlayStation game is remastered from the ground up, and all the old game modes are included as well. Controls are near 1:1 which makes it incredibly easy to jump back into the game like you never stopped playing in the first race. Everything you love is back- sometimes to a fault. 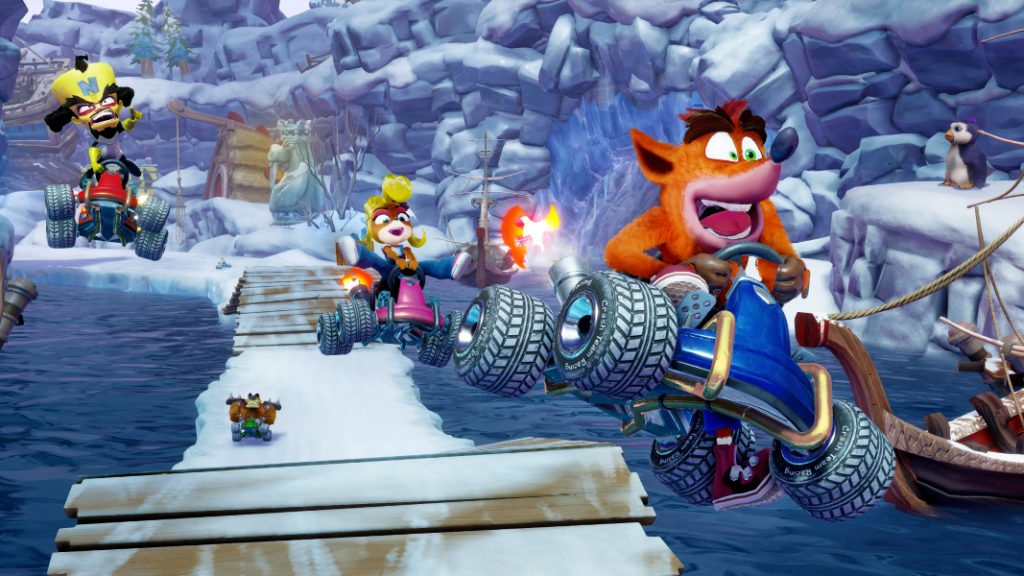 Like it or not, Crash Team Racing has some blemishes the most hardcore fans would rarely admit- issues that weren’t fixed for this remaster. The biggest problem is the rubber-banding AI, which is absolutely relentless. Computer players are programmed to always keep up with you, no matter how well you play. You could play exceptionally well only to be overtaken at the end by an impossibly fast CPU or you could be playing terribly and suddenly make an undeserved comeback in the last lap. In some manner, there’s only a 50/50 chance of winning a race depending on whether or not the computer has been granted super speed at the last moment or not.

The boss characters, which show up during the Adventure mode, spew impossible amounts of items behind them as they drive in addition to the unfair rubber-banding. This is exactly how these boss races were designed, but this doesn’t make it good. There’s only one strategy to beating them- hope you get a Rocket item, hope it lands, and then drive immaculately if you get in front. That leads to my final gripe- there’s almost no item balancing. 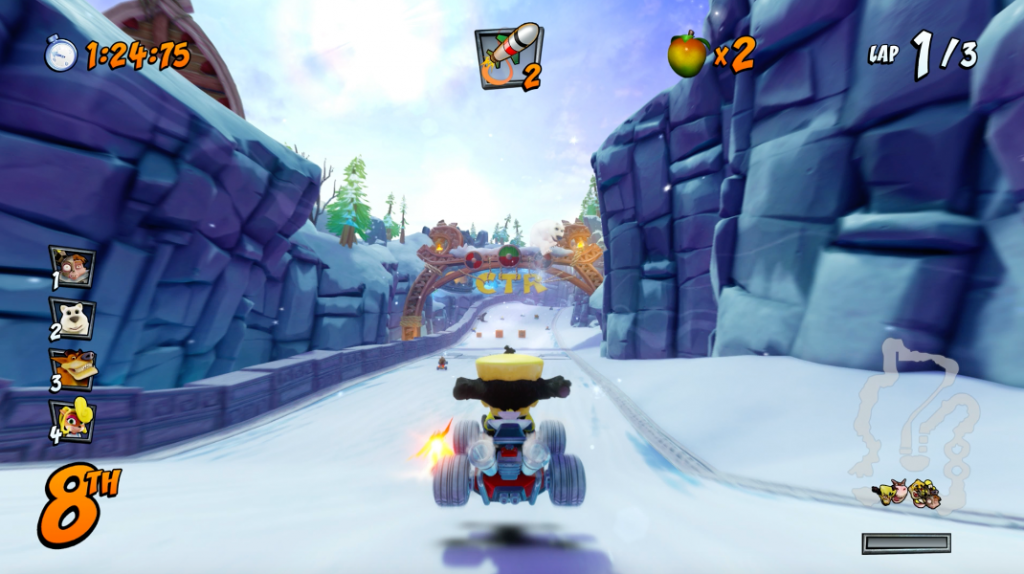 In Mario Kart, the item you can obtain is relevant to your position. Top positions will receive defensive or useless items like Bananas, Green Shells and Coins. If you’re in the middle, you’ll be granted Red Shells, Fake Item Boxes and Mushrooms. If you’re trailing behind you’ll get the powerful items, your Stars, your Bullet Bills, and your Blue Shells. This ensures all players have a chance to recover or defend their position if they use their items correctly.

CTR’s item distribution is essentially random in contrast. Items all have relatively equal value, and you can get most of them in any position. If you’re in first place and score Triple Rockets, you’re laughing.  If you’re in last place and all you get is a Potion to drop behind you, there’s not much use that can give you. Sorry.

But that’s enough gloom for what are mostly minor flaws to a game that, at its core, focuses on multiplayer play rather than CPUs. Let’s talk about all the added bonus content that gives this release the Nitro-Fueled title. 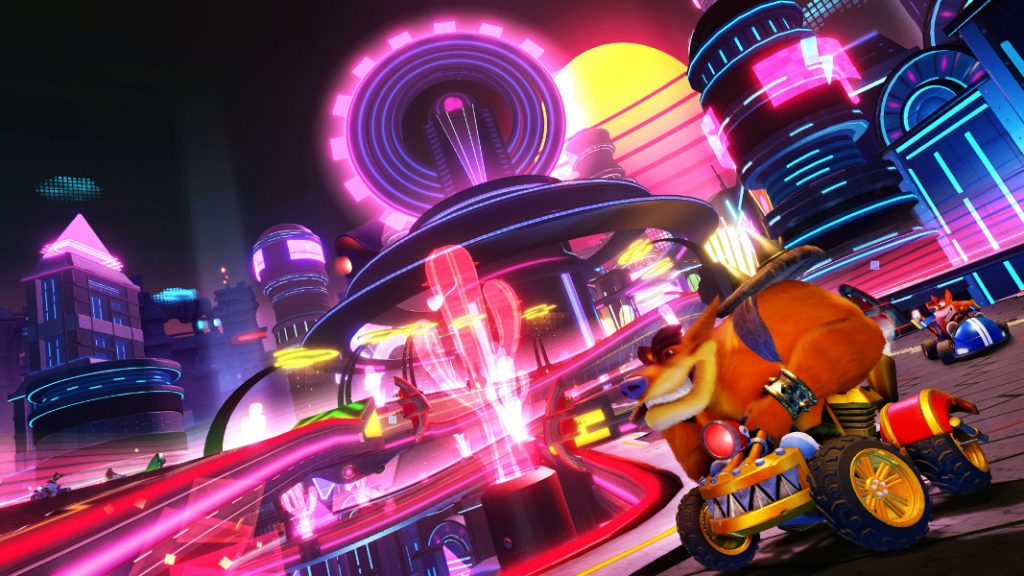 Starting with the biggest addition, we have the inclusion of tracks from CTR’s sequel Crash Nitro Kart. All 12 tracks from the PlayStation 2/Xbox/GameCube game have been added to Nitro Fueled, bringing the base game contents to 30 tracks. However, there are some caveats to these additions. Firstly, and curiously, the anti-gravity mechanic that defined many of Nitro Kart’s tracks (in which Crash in fact beat Mario Kart to the punch) have been removed completely. This causes some of these tracks to be more of a re-imagining of Nitro Kart’s tracks instead of a faithful remaster.

Furthermore, Nitro Kart’s campaign mode does not return, and nor have these tracks been retroactively added to CTR’s Adventure mode. They just exist as bonus tracks within the Arcade mode. It’s still better to have than nothing at all, but it’s a bit of a shame that CTR and Nitro Kart weren’t both fully remastered considering the N. Sane Trilogy had three complete games. Many of Nitro Kart’s new racers have been brought over too, but you wouldn’t be alone if you had a hard time recognising them as they aren’t particularly memorable or synonymous with the Crash brand. 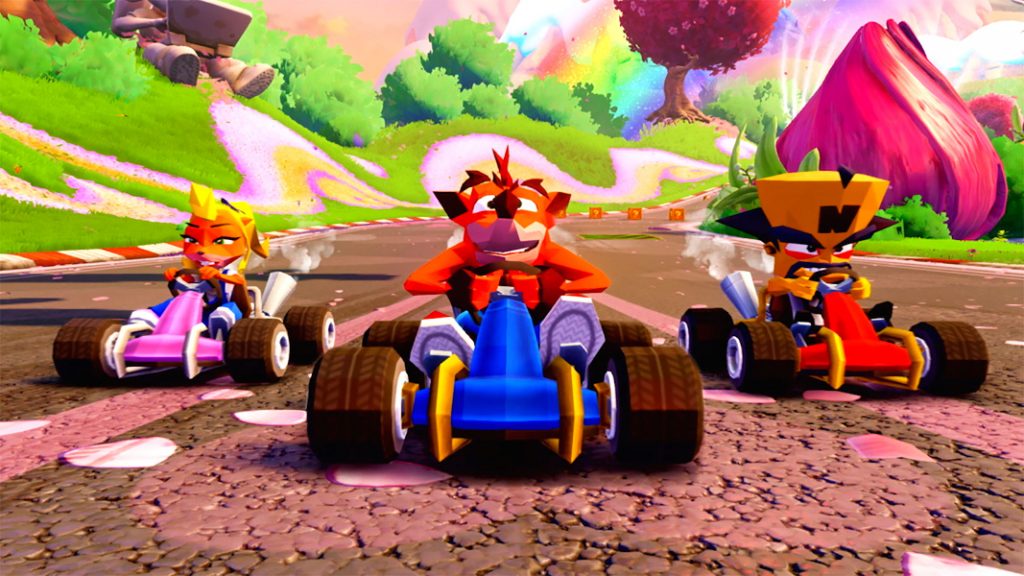 We also have some brand-new content in this remaster, but don’t get overly excited- they’re only aesthetic. We have the all-new ability to customise our racers and karts. Kart bodies and tyres can be swapped out in in-game menus and there are a ton of custom paint jobs and stickers to add flavour to your vehicle. You might think swapping kart bodies and wheels means stat changes to your kart, but you’d be wrong. Driving stats are linked solely to the character- not the kart. This way, you can go nuts with your kart setup. Make it crazy, style your ride any way you want. Your characters can also be customised with unlockable skins that could be simple palette swaps, or could even be completely new outfits to personalise your favourite characters. Granted, it might take you a while to unlock them all.

While some customisations are unlocked by playing through the Adventure mode or playing with certain characters enough times- many of them are locked behind a new shop system. The Pit Stop is loaded with random daily purchasable customisation options (and even some exclusive characters), and to buy them you need Wumpa Coins, obtained from competing in races. The amount of Wumpa Coins you score from one race varies quite a bit, anywhere from 0 to 100 based on your finishing position and time. A problem with that is that items are quite expensive, with most items costing thousands of coins. If you want to commit to unlocking everything in this game, you’d best be prepared to grind- a lot.

It’s clear that this system is in place to keep people playing the game on a regular basis, but I found myself only playing to grind for coins, instead of having fun playing the game on its own merits. As previously mentioned, these items are all superficial rewards that don’t add anything to the game, so it’s best not to waste your time collecting customisations you don’t ever plan on using. I sure wish there was an option to stop CPU players from using random skins, though. Sometimes you just want to keep things vanilla. 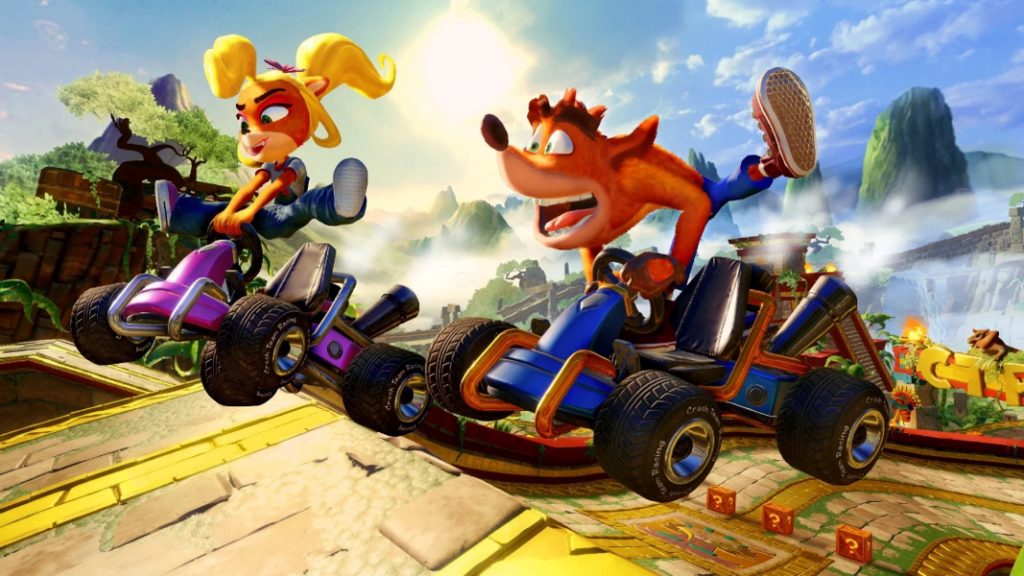 With this (admittedly long) review starting to wrap up, here’s a few final notes on content that is exclusive to the PS4 version of the game- low poly skins are available that are supposed to mimic the look feel of the original PlayStation version of the game. I suppose they’re a cool extra thing to have, but I wish they were more faithful to the real in-game models from the PS1 era. We also have a low-poly version of a single track in the game that’s just chock full of PlayStation product placement. It’s only one exclusive track and for that matter, it’s just a blocky replica of an existing track in the game, so it’s not essential to a complete experience. Go for the PS4 version if that’s where your heart lies, but the game is still a complete experience no matter which platform you choose.

Crash Team Racing: Nitro Fueled is sure to appeal to old-time fans of the game and has a good shot of being the definitive multi-platform alternative to Mario Kart. It has some issues, like every kart racing game has, but it succeeds in being fun to play and it’s chock-full of personality and charm to make it worth any gamer’s time.