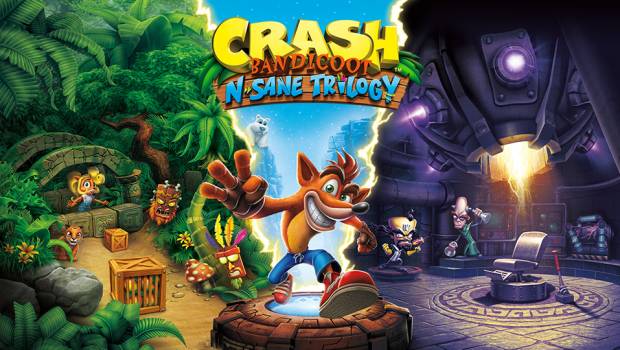 Summary: For newcomers to the series some of the brutal 90s difficulty may be too much to take, but give it a chance, you just might like Crash Bandicoot N. Sane Trilogy on the Nintendo Switch.

Oh the 90s.  As Mario and Sonic shot to fame as the mascots for their consoles, they left a plethora of inferior 2d platformers and in their wake. Zool, Busby, Cool Spot and a number of others all tried and failed to capture the top notch gameplay of Nintendo and Sega’s flagship games, not to mention the imagination of the public. As Mario leapt into the third dimension to considerable critical acclaim a whole new genre was born, and with it a chance for other developers to make their mark. Enter Crash Bandicoot, the next in a long line of cool marsupials to vie for the platformer crown and announce itself as the Playstation’s unofficial figurehead. Critical and commercial success followed and a star for the 32-bit era was born. Times haven’t been as kind to Crash lately, the developers went on to bigger things (You may have heard of Uncharted or The Last of Us) and the franchise languished under lesser hands. Now the power of nostalgia is here to bring Crash back with a vengeance for the latest generation of consoles with a fresh coat of paint and the same old mechanics. 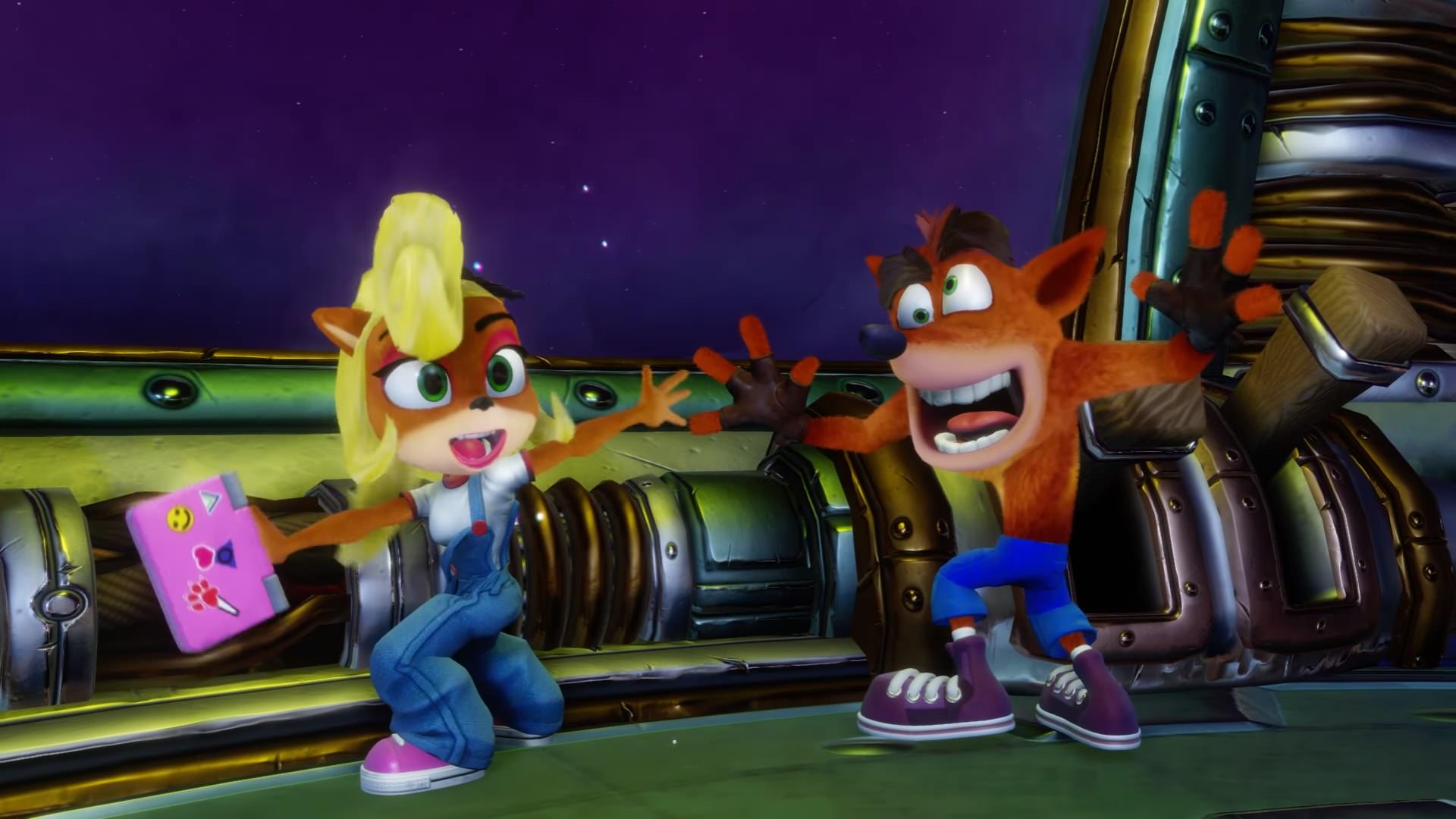 Vicarious Visions have been handed the task of making Crash relevant again and they have done a great job on the graphical updates. Crash and co look like they could be straight out of a Saturday morning cartoon. Every little detail is now more lush and full of life. Crash now has a full shadow instead of the old school circular shadows and enemies also look more dynamic. The Switch version has sacrificed a little visual fidelity to run smoothly but still looks great, and honestly games like this are born to be played portably. The soundtrack also still sounds fantastic, and you will regularly find yourself humming tunes.

As far as gameplay goes, Vicarious have built the game to be an exact replica of the original trilogy for better and worse. There were various maddening points of all three games where I couldn’t decide if Crash Bandicoot was challenging like games used to be, or if it was just poorly designed and I’m still not sure. The precision platforming moments in particular sometimes bordered on the ridiculous, as you’d navigate through various obstacles and enemies only to jump to your death on a seemingly insignifact jump. I cursed every time a nitro box showed up as I continually jumped into them instead of over them. I sulked as I overshot the simplest ledges. I loudly threatened to nobody in particular to stop playing as I bounced on a series of boxes only to fall short at the end. When the same console you’re playing these games on possesses Super Mario Odyssey these flaws tend to very much read as… well, flaws. That being said, for every annoying thing that happened to me and there were a lot of annoying things, I never once stopped playing. I kept trying until I got there and breathed a massive sigh of relief.  So while it does often fall on the side of fun and challenging, there is enough of the dated game design that may not make this enjoyable for someone who isn’t used to Crash Bandicoot. 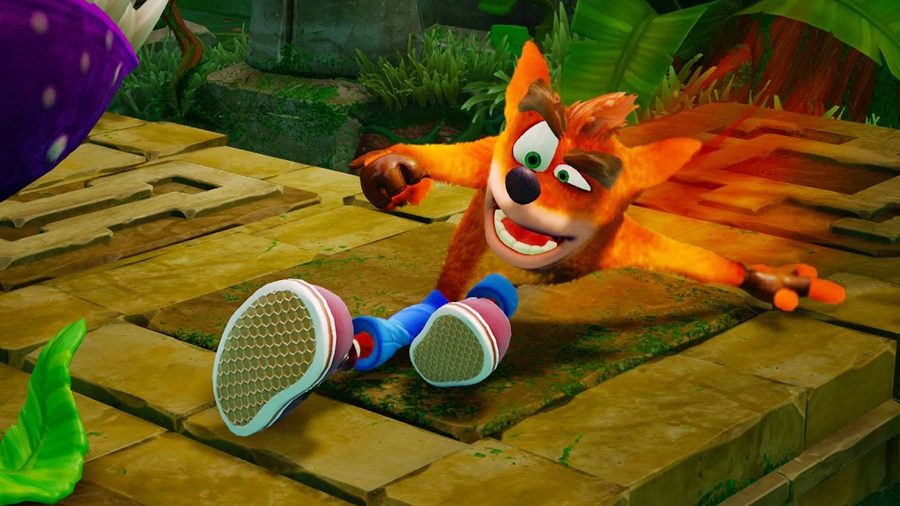 Of the three games, it might not be surprising to learn that the original holds up the worst. The platforming mechanics are at their worst, the enemy and scenery are at their drabbest and Crash doesn’t have all the moves he’ll gain later on in the series. Crash Bandicoot gets better as it goes on but is still the most repetitive and least fully formed of the three.

Crash Bandicoot 2: Cortex Strikes back is a significant upgrade and features a number of new elements that became series mainstays, including the Warp Room and Crash’s sister Coco. It also features levels that are longer and more involved, some with numerous routes and many with hidden nooks or crannies containing extra rewards. The enemies here are also a little smarter than the first, but still mostly suffer from following preset paths and animations. Cortex Strikes back is arguably the most balanced entry in the series, as although its ambitions aren’t as grand as the subsequent installment, it also doesn’t have quite as much bloat. 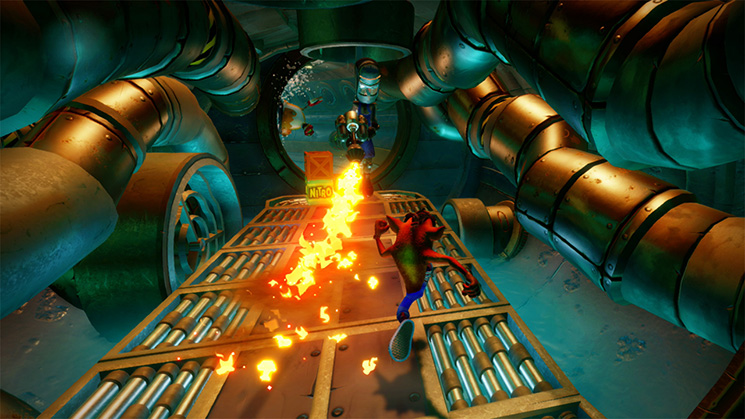 Crash Bandicoot: Warped is the final game in the series and many believe it to be the best. The new abilities, which are gained over time, are a lot of fun, and the game does a good job of incorporating them into levels as it goes forward. It is also the largest and most varied of the series although this can work against it sometimes. Coco’s airplane level and Crash’s motorbike races are particularly egregious examples of this, adding lame vehicular sections that are more tedious that anything. Thankfully Naughty Dog would perfect vehicles in the excellent and underrated Crash Team Racing, which unfortunately is not in this collection but deserves a mention. 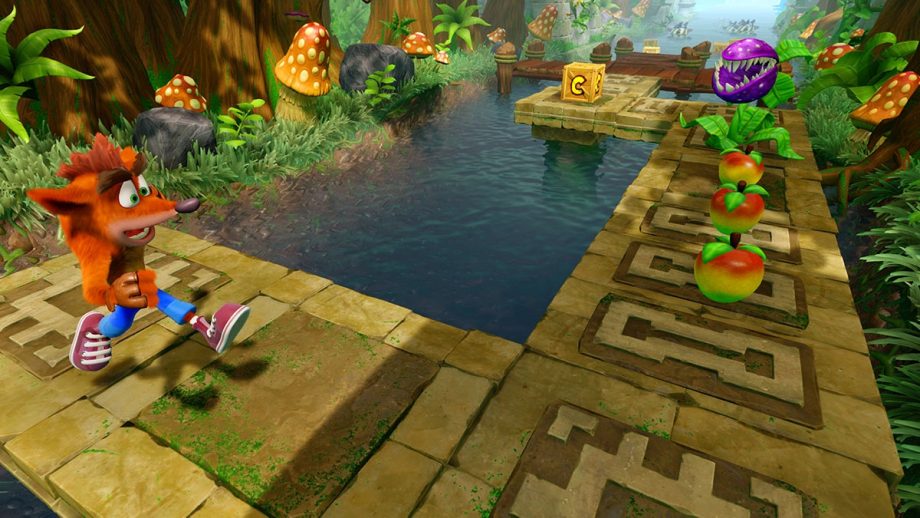 While parts of the Crash Bandicoot N. Sane Trilogy seem like they should be consigned to the bin of 90s relics (looking at you sexy Bandicoot from the first game), there is plenty of inventive and challenging platforming to be found. The game runs like a dream on the Switch and will leave you swearing to have one more go, even as you fall to your death cheaply for the umpteenth time. For Crash Bandicoot fans it is essential, the same games you know and love with a brand new sheen. For newcomers to the series some of the brutal 90s difficulty may be too much to take, but give it a chance, you might just like it. 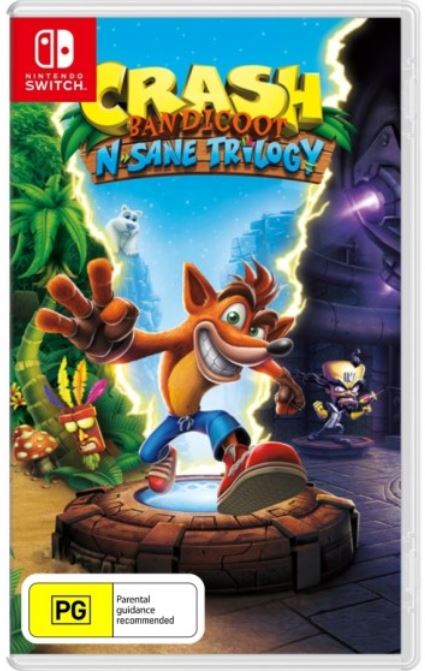