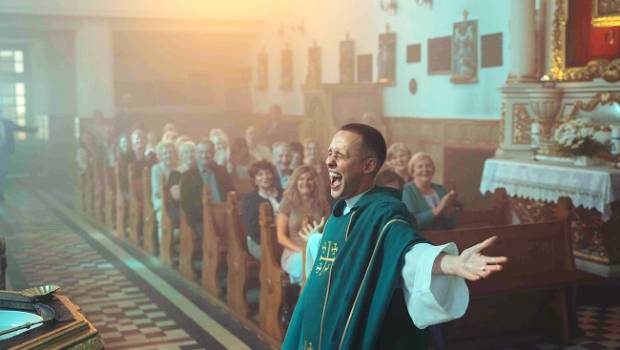 Films about the Catholic Church either dramatise the community’s strength or its hierarchy’s systematic corruption. However, this exemplary Polish drama by director Jan Komasa encapsulates and transcends both subjects. The idea of an imposter in the Catholic Church came to the film’s screenwriter, Mateusz Pacewicz, from a real-life incident. A young Polish man impersonated a priest for nearly three months. The practice is not uncommon in places like Poland and Spain where frauds inherit social statuses once unobtainable.

Pacewicz argues he fictionalised the story to convey two thematic ideas: the falsity of everyday social roles and how people are imprisoned by grief. Additionally, Komasa’s criticism of the church stems from its oppression of marginalised groups. The successful merge of Pacewicz’s thematic goals and Komasa’s political compass has resulted in a dramatisation of shifting perceptions.

A potentially comedic premise is potently told through intense social realism and a sombre tone. The story is about Daniel (an excellent Bartosz Bielenia), a young man preparing to leave juvenile detention. To be a good, proactive inmate, he helps Father Tomasz (Łukasz Simlat) by singing during Mass. Yet he is also warned by violent thugs that once he leaves, they will find him. To prepare for the outside, Tomasz offers Daniel some advice. He tells him that, ‘no seminary accepts convicts like you’ and instructs him to work at a town’s sawmill. Instead of heeding Tomasz’s words, Daniel parties hard and is reluctant to work in the sawmill.

When he reaches the town, he tells a young woman named Marta (Eliza Rycembel) he is a priest and presents his clerical collar. He is introduced to Father Wojciech (Zdzisław Wardejn), an alcoholic who puts him to work. Though Marta’s mother, Lidia (Aleksandra Konieczna), is visibly sceptical of Daniel. When Wojciech unexpectedly leaves for rehab, Daniel is stunned to be left in charge. He is also troubled by how scarred the community is from a drink driving accident where seven people died, including Marta’s brother. As she and Daniel grow closer, they try reaching a reclusive widow (Barbara Kurzaj) whose husband was blamed for the accident.

Corpus Christi is a complex study of how perceptions of people evolve and how impressions skilfully deceive us. Daniel is first portrayed as a victim of the juvie system. His necessity to leave stems from his likely murder. Yet once free, he is characterised as suffering poor judgement. When Tomasz tells him to remain sober, Komasa hard cuts to Daniel partying and taking drugs. The cut characterises him as someone on the outskirts of society without smarts or purpose. When a policeman asks where he is going, he replies, ‘wherever the wind takes me’. The line underscores his directionless nature. Gentle humour is unearthed by watching both his lies deepen and his personal growth.

He faces increasingly difficult tasks, such as hosting Mass, hearing confessions, and, most awkwardly, reading an elderly woman’s last rites. In one quietly funny scene, he learns the order of confession by reading his phone in the booth. Despite his lies, Daniel’s unconventional approach draws our sympathy. He enriches the town and Catholicism itself with his youthful affability and resistance to powerful forces, such as the town’s mayor. Yet the moral ambiguity is whether Daniel is a good person because his actions are inseparable from lies. The personal conflict is sustained through Bielenia’s subtle, humane work. His eyes express feelings of torment and guilt because Daniel knows his false persona is unsustainable.

The subplot involving the tragic accident further underlines shifting perceptions and the imprisoning nature of grief. It is fascinating how this storyline continually evolves and casts new light on the community’s misdirected hate and misinformation. To relieve their pent-up anger, Daniel uses unconventional lessons from juvie to reunite the community. This includes screaming aloud in front of a memorial shrine and questioning what it means to pray. It provides him with purpose and earns most of the town’s respect bar Lidia.

The irony is that he is imitating Father Tomasz and his techniques to help people. He resembles a decent person albeit one haunted by his past. While the ending will not be spoiled, the disturbing and uncomfortable finale further shifts our perceptions and continues to challenge Daniel’s evaluation. His overall development reinforces Pacewicz’s belief that impersonation momentarily counters loneliness and results in higher social status and conformity. 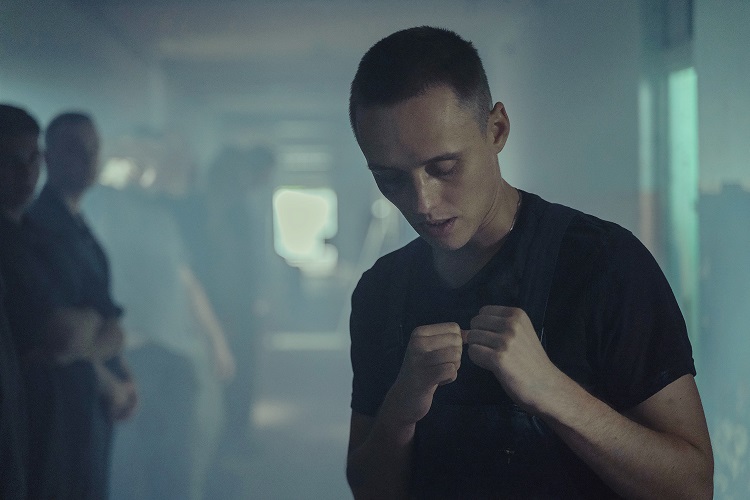 While only Komasa’s third feature, his directorial choices bring skill and artistry to the proceedings. The gorgeous outdoor photography by cinematographer Piotr Sobocinski Jr. is a notable facet. He and Komasa shot Corpus in south-eastern Poland. The most attractive image is arguably an establishment shot of a large washed-up boat where a group of young people party. The naturalism of the images provides Corpus with handsome cinematic distinction.

The shot selection is also imperative in amplifying perceptions and meaningful social roles. This is evident when Daniel first reaches the town. The long shot of the open field is beautifully framed and underlines Daniel’s isolation. He lacks purpose in the outside world, which stresses his decision to lie and attempt to become respectable. Reoccurring stylistic patterns enforce a similar thematic idea. One example is how Daniel is filmed in tight spaces and from the waist up. In one scene, he is filmed in the corner of his room smoking while studying the Bible. The narrow spatiality suggests his incompleteness because he lacks purpose in life and is lonely.

Komasa’s camera is used effectively to examine important mannerisms and to underline subtle contrasts. The way Daniel fumbles through Mass is tightly framed by the camera. As he draws from his experiences, his fresh, unconventional voice captures the town’s interest. During Mass, he declares that ‘heaven is on earth’. Consequently, the camera retracts so that his entire body is visible at the front of the church. It illustrates his fulfilment as his confidence grows and he feels accepted by the community. The decision to film him in mid-shots smartly climaxes with a full body shot during a crucial endpoint where his relationship with the town shifts.

The deft colour selection is also critical to the themes. The early scenes are photographed with a desaturated colour tone. It heightens the bleakness of imprisonment and Daniel’s unlikely future. The church scenes are equally muted with only faint light peering through the windows. The muted palette illustrates the lack of optimism associated with these flawed institutions. However, the deliberate choice of a primary colour, the green chasuble robe, stresses Daniel’s significance against the bleakness and how he injects life into the community. These are examples of how colour and framing express ideas of perceptions and communal angst. 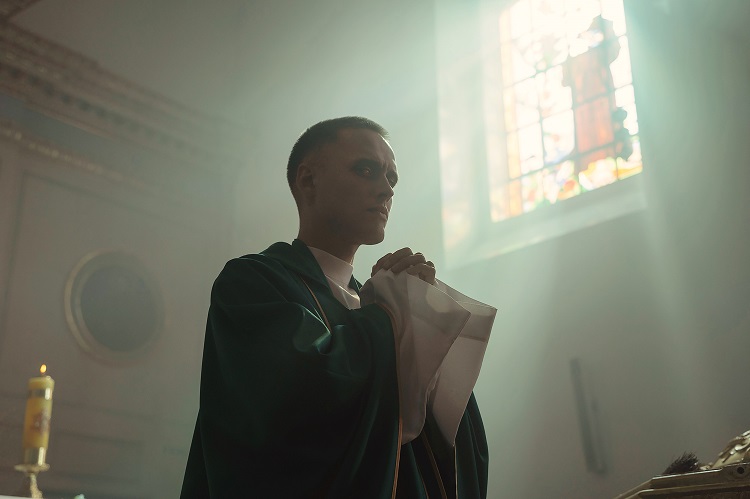 Corpus is buoyed by exceptional craftsmanship, including Bielenia’s nuanced performance and several deft stylistic choices. Komasa’s choice of colour and judicious framing articulates Daniel’s loneliness and his conflict with his own lies. These filmic choices transform a bizarre true story into a genuine artistic, cinematic experience. While Corpus’ inevitable showdown is predictable, it is enriched by an intriguing subplot where our perceptions of the painful backstory change.

Our view of Daniel shifts sizably too because we are left asking if he is redeemable or has everyone fooled. Interestingly, a happy ending is forgone in favour of a violent, disturbing, and ambiguous conclusion. The finale typifies how in different hands this story could have gone horribly wrong. Instead, the social realism and reverence for the depth of the material elevates this into a gripping morality play.