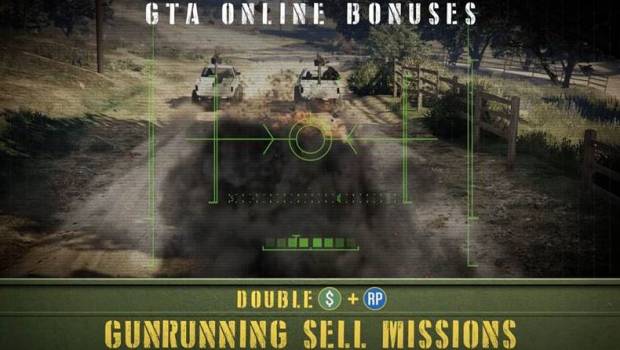 Subterranean entrepreneurs are set to profit this week with Bunker-manufactured contraband netting Double GTA$ & RP via Gunrunning Sell Missions through April 16th. And like any good boss, you want to get the most out of your staff – so fire up the Disruption Logistics website on the Bunker Laptop and assign your team to Research, which is running 50% faster to unlock choice upgrades for the same period.

Warstock Cache & Carry is offering up a barrage of discounts this week, from the nimble Dune FAV to the hulking war machine known as the Mobile Operations Center. From there, you can take advantage of discounted MOC Cabs, Bays and the Mk II Weapon Upgrade (available via the MOC or Avenger Weapon Workshop), along with a slew of other savings:

Yet to establish your underground lair? Take advantage with deep discounts on select Bunkers from Maze Bank Foreclosures, or if you’re in the market to spruce up your current digs with a fresh coat of paint or a new Shooting Range, save some serious cash on the following:

Two of Legendary Motorsport’s finest autos are also on sale this week – grab 25% off both the Pfister Neon and Overflod Autarch through April 16th.

Get ready to take on The Vespucci Job – a brand new mode where you’re either on the run in the diminutive vintage Italian export the Weeny Issi Classic (coming to your local Southern San Andreas Super Autos dealership) or you’re in hot pursuit in an LSPD squad car trying to put an end to the madcap caper. Also, be on the lookout for new arrivals from Legendary Motorsport and Elitás Travel in the form of the mighty Vapid Flash GT Sports car and the Sea Sparrow Chopper. Much more details to come when it all drops next week Tuesday April 17.