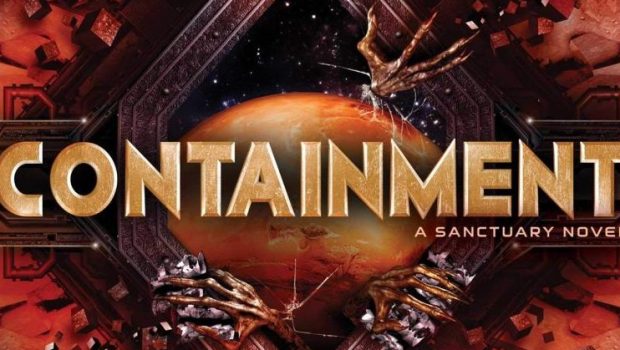 Summary: Fleeing Sanctuary things seemed to be looking up... then Kenzie and the former prisoners discover a signal suggesting more aliens are on their way.

Has your heart stopped racing from Sanctuary yet… well get ready for things to get thumping again with Containment. Having used the alien craft to escape Sanctuary things seemed to be looking up… until Kenzie and her new friends intercept a radio communication suggesting more aliens are on their way. With only one option apparent to them, Kenzie and friends need to find somewhere to ditch the ship and destroy it before it leads the aliens directly to them.

Containment hits the ground running… things are happening all over the place and they go from bad to worse it seems. Along the frantic journey time is given to flesh out some of the characters and the dynamics between Kenzie and the others. This is one of the strengths of the books… though some may say they don’t go into enough depth… I feel they work at a decent drip feed rate. Little pockets here and there, furthering the understanding of how the characters relate to one another and how those relationships impact their actions.

Putting yourself in Kenzie’s shoes is also an interesting experience. To be young enough that the word of her parents had still been considered infallible and to have been brought up with the idea that the corporation was always right too… those are some pretty big concepts to have to wrestle with… all while being pursued by a horrible alien force and having to solve problems that would stump many grown adults.

The variety of characters is also impressive and refreshing… they aren’t there to tick boxes… they are there simply because those are the mix of people who would have been in those locations. Representation is an important thing and no doubt having so many characters from so many different backgrounds makes this story all the more appealing to people who are frequently left out of media. The backstories of the characters adds to their believability as does Kenzie’s suffering PTSD over the events on Sanctuary.

If you enjoyed Sanctuary you will most likely love Containment… if you haven’t read either… it’s probably best to start with Sanctuary… but if you want to pick up Containment you should be able to piece it together after a while (I accidentally read them out of order and things do start to make a bit more sense after a little while… but it is a bit easier reading it in order ;) )