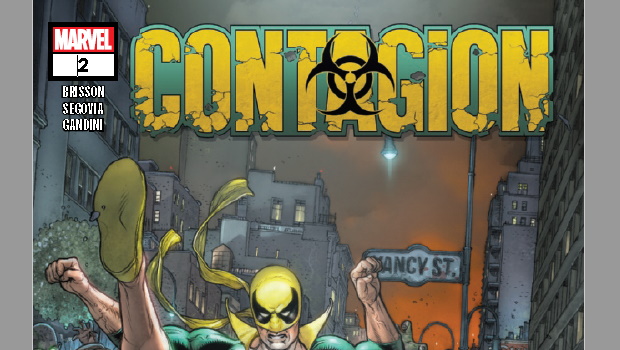 Summary: More heroes arrive to tackle the strange fungus, known as the Urchin, but do many hands make light work, or simply provide more food for their foe?

With three quarters of the Fantastic Four out of action and no sign of the aggressive fungus, known as The Urchin, stopping… The Thing will accept any help he can get. Iron Fist and Luke Cage join the fight and more heroes are joining the battle but with not much information about their foe it’s an unfamiliar battle ground and the solution might not be so easy to come by.

Ed’s really working that seemingly unstoppable foe angle, effectively a plague that keeps spreading and spreading. All you can do is watch as those you care about drop around you. Just as headway seems to be made… the rug is pulled out from under our would be saviours. The ups and downs of the story really have you feeling like you are being wrenched back and forth between hope and despair… there is a lot at stake and Ed doesn’t mind suggesting that there may be no escape (must be that horror movie inspiration).

Stephen has done a great job bringing the scary scenario to life on the pages. I’m not super familiar with Iron Fist and his world… but I did find it interesting seeing him and Sparrow in what appeared to be a “Naruto run”. I particularly like the glow effect deployed throughout the comic, Dr Strange’s magic, projection calls… it all gives a lovely otherworldly feel to the pages.

I both do and don’t want to know where this series is going. It’s worrying seeing such well known heroes drop at what is more or less just a touch. Just when you think they are making some progress, things take a turn and things seem to get exponentially worse. I don’t know how long this series will run for… but there are still plenty of Marvel characters that can be brought in to help… as to whether they are able, that remains to be seen. If you like your superheroes with a dose of horror… you need to be reading this series!