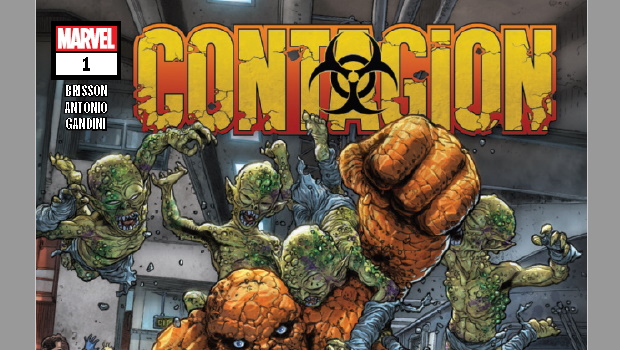 Summary: Superheros often seem to be able to tackle the biggest foe... but what about the smallest... a contagion?

When you’ve thrown just about every villain you can at your roster of heroes… who, or what, is left that might pose a threat to them? With Contagion, Marvel pits some of it’s biggest New York heroes against an unknown force… a strange substance that is taking down heroes and citizens alike.

Almost in a page out of War of the Worlds, Ed Brisson pits heroes against what could be described as an ailment… only an ailment far worse than any they have ever known before. As mentioned at the back of the comic, Ed was heavily influenced by some of the “classic” horror movies of the VHS age and he has taken that genre and thrust it right into the Marvel universe. There’s a very real sense of panic as some of our favourite heroes start dropping and the writing teases out the “enemy” in such a way that will have readers drawn deeper and deeper into the horror before they get any sign of relief.

There’s some nice clean line work here, contrasts between characters and scenery that makes the pages easy to enjoy. That may not seem like much, but I have read some comics that I’ve ended up just feeling lost in the panels, confused as to what’s what. That clarity combined with the lovely colour choices means the art here stands out for the right reasons.

What a way to start a series! A seemingly nice day out for Ben, quickly turns into a horrible discovery under the city and a threat of what is coming. It would be a good idea to get in on “ground zero” here and grab this issue for what is bound to be a scary, deadly series.