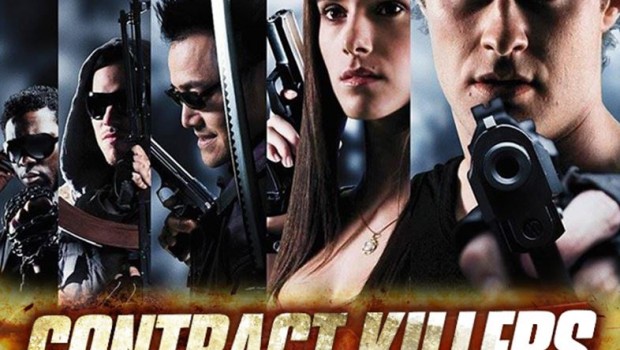 Melbourne, AU – 23rd of February – Bounty Films is exploding with pride to announce the Australian DVD/VOD release of Contract Killers on the 18th of May 2016. The producers of the film will be available for a limited amount of media engagements.

‘Double-crossed by those he trusted the most, a newbie government hit man discovers that he’s the target for the world’s most dangerous assassin and so begins a ruthless game of kill first of be killed’.

A wisp of a plot holds together of 90 minutes of crazy kung-fu fights, explosions, car chases, and impossible head shots. Seriously, at point a Hitman shoots through a stripper, who is giving him a lap dance, in order to kill a stripper turned Hitwoman – it’s mental!

Bounty Films is one of the few distributors brave enough to release Contract Killers as it’s made of pure explodium, forged in the fires of bad arsery. This films isn’t for the faint of heart or good of taste. It’s also the best low budget action film, that was produced in New Zealand with American accents, being released in Australia in year 2016!

“…a John Woo charged gauntlet of kung fu, gun-porn and blood.” – Film Critic, John Noonan
“Contract Killers is a time capsule. A love letter to the mid-nineties action movies, such as The Rock and Face/Off, that won everyone over and kept Nicholas Cage out of the taxman’s pocket.” – Early Bird Film Society

Contract Killer will be available to purchase in Australia from JB HI-FI and other major retailers from the 18th of May and available from streaming via Vimeo on Demand.