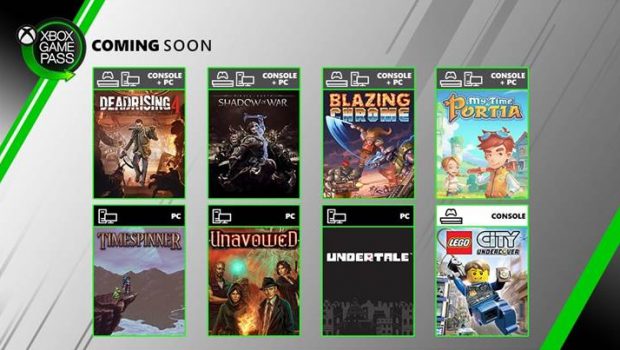 Hey, Xbox Game Pass members! If you didn’t catch them on Twitter, it’s time for our IRL patch notes. Updates include: A major buff for The Sun. There is a new debuff: Sunburn, where overexposure to The Sun will cause damage over time and limited mobility. A new item has been added named Sunscreen that gives you a temporary resistance to Sunburn. The seasonal event Vacation was added, giving players a significant stress resistance when applied. New items have been added in the tailor shops like Swim Trunks and Sleeveless Cloth Armor. Lastly, Grilled Meat is more readily available at vendors.

On top of all those games, you can be among the first to play the new Gears 5 Versus mode this month during the Gears 5 Tech Test.  All current Xbox Game Pass members get access, with no preorder required! If you’re not a member yet, you can snag your first month of Xbox Game Pass Ultimate for just one buck. That’s right, just $1

We add new games all the time, but to keep the library curated and fresh for you, we do have to let some beloved titles go. Now’s your chance to get in some playtime before they leave this month! Or, if you love them too much to part with, don’t forget you can use your Xbox Game Pass member discount to buy them at up to 20% off before they go.

While we anxiously await the big announcement of when exactly the Gears 5 Tech Test will be playable, check out our Xbox Game Pass Quests for July. Earn more than 1,500 Microsoft Rewards points in the games you love including Monster Hunter: World, Hollow Knight, Forza Horizon 4, LEGO Batman and many, many more. And that’s not all. Score a killer prize by completing as many Xbox Game Pass Quests as possible by July 31. Each quest gives you 10 entries for a chance to win one of these amazing prizes:

My last reminder is to stay on top of all these games and other Xbox Game Pass tidbits, you should download the Xbox App for PC, as well as the Xbox Game Pass mobile app, where you can easily download games to your console while you’re out. For more memes, follow us on Twitter and Instagram, and for news about PC gaming, follow our new PC Twitter handle @XboxGamePassPC. And of course, stay tuned here to Xbox Wire for all the latest and greatest Xbox news.