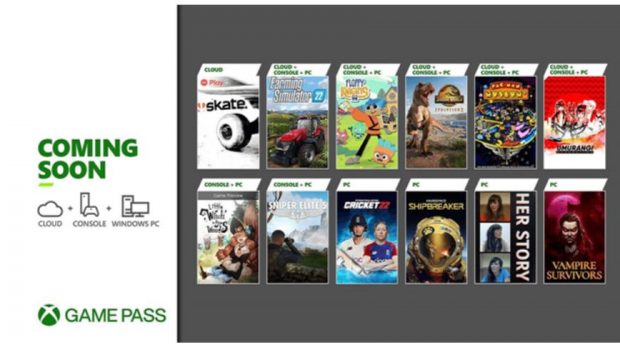 Overnight, Microsoft announced the latest wave of titles coming to Xbox Game Pass for Console, Cloud and PC libraries over the next few weeks. Upcoming additions include:

Hey friends, please act surprised, we have even more games coming to Game Pass! For a real surprise – we have five games coming so soon that it’s literally today soon! Charge your controllers, plug in your mouse, fire up your second monitor, and let’s look at what is coming to your playlist for the rest of May.

Her Story (PC) ID@Xbox
The game that relaunched an entire genre, Her Story is the award-winning mystery game from Sam Barlow, writer/designer of Silent Hill: Shattered Memories and creator of Telling Lies. In this nonlinear crime fiction classic, a woman is interviewed seven times by the police. Search the video database and explore hundreds of authentic clips to discover her story.

Skate (Cloud) EA Play
Head back to where it all began in Skate, available today with cloud gaming via EA Play! Get chased by security guards, impress citizens, ride with pros, discover skate shops, and make spots your own in this fully reactive city!

Umurangi Generation Special Edition (Cloud, Console, and PC) ID@Xbox
Available on day one with Game Pass: Umurangi Generation is a first-person photography sandbox set in the retro future city of Tauranga, Aotearoa during an impending crisis. As a courier for the Tauranga Express, you get to travel around Tauranga taking pictures and documenting the world and its reality through the lenses of your camera.

Farming Simulator 22 (Cloud, Console, and PC) – May 19
Farming Simulator 22 brings a multitude of new gameplay features and offers more content and player freedom than ever before, including new ground working features like mulching or stone picking, an improved build-mode adding greenhouses and beehives, as well as a new character creator to bring your own, individual farmer to life.

Vampire Survivors (PC) ID@Xbox – May 19
Jump straight into the action, mow down thousands of night creatures, and survive until dawn! The gothic-horror world of Vampire Survivors will throw relentless hordes of monsters at you: make the right choices, or rely on your skills and favourite weapons to turn the tide and quickly snowball against your enemies

Floppy Knights (Cloud, Console, and PC) ID@Xbox – May 24
Available on day one with Game Pass: Floppy Knights is a fresh take on two familiar genres: tactics fused with card-game strategy. Join Phoebe and Carlton, a brilliant young inventor & her robot-arm bestie, as they square off in turn-based battles. Build the perfect deck, execute seamless card combos, and lead your Floppy Knights to victory!

Hardspace: Shipbreaker (PC) ID@Xbox – May 24
Available on day one with PC Game Pass: Equipped with cutting-edge salvaging tech, carve and slice a variety of derelict spaceships at will in zero-g to recover valuable materials. Be careful with your tools: you don’t want to trigger an explosive chain reaction that could be deadly, or worse – costly! Upgrade your gear to take on more lucrative contracts to pay your debt to LYNX Corporation through a compelling campaign, relax in freeplay, or compete in timed challenges.

Sniper Elite 5 (Console and PC) ID@Xbox – May 26
Available on day one with Game Pass: The award-winning series returns with unparalleled sniping, tactical third-person combat and an enhanced kill cam. Fight your way across the most immersive maps yet, with many real-world locations captured in stunning detail, and an improved traversal system that lets you explore more of them than ever before.

Cricket 22 (PC) ID@Xbox – May 27
Step on to the field for the most comprehensive cricket game ever with PC Game Pass! With more licenses, a narrative-driven career mode, and 4K visuals, Cricket 22 is a true next-generation sporting experience. All-new control options make the game more accessible to players of all skill levels, while Big Ant Studios’ authentic recreation of every aspect of the sport provides hundreds of hours of hyper-realistic cricket action for fans. Lead your team to glory, your way!

Pac-Man Museum+ (Cloud, Console, and PC) – May 27
Available on day one with Game Pass: Pac-Man Museum+ features 14 of the series’ legendary games! Players can enjoy the iconic original arcade classic alongside a variety of other play styles from over 40 years of Pac-Man history! Also includes online leaderboards and the ability to customize your very own virtual arcade room! Plus, Ultimate members can play with cloud gaming and touch controls on day one, no controller needed!

Grounded: The Bugs Strike Back Update – Available now
You’ve been in the backyard for a while, and the bugs have had enough! Prepare for new base defence modes, new armour upgrades, additional crafting items and traps, an all-new bestiary system, and even more to discover when the bugs strike back! Learn more here.

Ultimate members, we’ve added Xbox Touch Controls to 11 more games ready to play from the cloud today. Jump in on the Xbox app for Windows PCs, Xbox Game Pass mobile app on Android devices, or Xbox.com/play on your Windows PCs and Apple phones and tablets, no controller needed!

The following games will be leaving the Game Pass library soon, so be sure to jump back in to tie up any loose ends or grab remaining achievements before they go. As always, be sure to use your membership discount to save up to 20% to keep them in your library.

The only thing left to do while we wait for these games is to follow us on Twitter at @XboxGamePass and @XboxGamePassPC. Maybe send along your go-to Vampire Survivors build so I can make it past 5 minutes? Catch you next time!