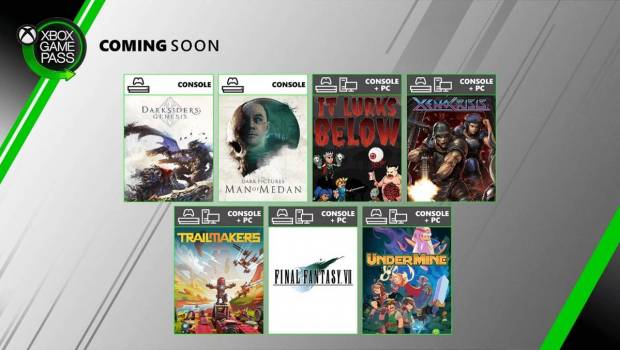 We’re still in Summer Mode here (though I’m jealous of those of you experiencing it without the heat), which means we have more games, more Perks, and more Quests for you today. Let’s jump in!

Darksiders: Genesis (Console) – August 6
An action/adventure game that tears its way through hordes of demons, angels, and everything in-between on its way to Hell and back with guns blazing and swords swinging. Genesis gives players their first look at the world of Darksiders before the events of the original game. Furthermore, it introduces the fourth and last horseman Strife, as well as co-op gameplay for the first time in the franchise.

It Lurks Below (Console & PC) ID@Xbox – August 6
The world is being slowly corrupted, and you have awoken from a terrible dream. Create a customized character and choose from several different classes to delve deep into the mysteries of what evil lurks below. Dig down and explore the randomly generated levels, find random items, and combat deadly monsters to get the answers in this retro-styled, 2D, action-oriented, survival RPG by David Brevik.

The Dark Pictures Anthology: Man of Medan (Console) – August 6
Five friends set sail on a holiday diving trip and as the day unfolds, a storm rolls in and their trip soon changes into something much more sinister. Who will live? Who will die? It’s up to you and the choices you make. You can also share your terrifying story with a friend online or go for safety in numbers with the up-to-five-players offline “movie night” mode.

Trailmakers (Console & PC) ID@Xbox – August 6
Build an amazing vehicle out of blocks and explore an alien planet in Trailmakers. This physics-based action game lets you build anything from hypercars and helicopters to hovercrafts and hydrofoils. Play solo or with friends in huge sandbox maps or perfect your race car to perfection in the Trailmakers Rally.

UnderMine (Console & PC) ID@Xbox – August 6
Delve deep into the UnderMine and discover its secrets, one peasant at a time! UnderMine is an action-adventure roguelike that blends combat and dungeon crawling with RPG-like progression. Mine gold, die, upgrade yourself, and try again! Challenge dangerous bosses and rescue helpful characters that supply new upgrades for your adventure. Decipher the cryptic messages of the UnderMine’s residents and unfold the mystery at the heart of the dungeon.

Xeno Crisis (Console & PC) ID@Xbox – August 6
Run and gun your way through seven distinct areas and master an arsenal of ten different weapons as you take on thousands of varied adversaries in this top-down arena shooter for one or two players. It will require guile, composure, and good judgement to have a chance of reaching the final showdown. Xeno Crisis is a genuine 16-bit throwback for those who enjoy a challenge, with superb pixel art and a blistering soundtrack.

Final Fantasy VII HD (Console & PC) – August 13
Relive the RPG that redefined gaming. The world has fallen under the dominion of the Shinra Electric Power Company, a sinister corporation that has monopolized the planet’s very life force as Mako energy. Cloud Strife, a former member of Shinra’s elite Soldier unit, now turned mercenary, lends his aid to the rebels, unaware that he will be drawn into an epic battle for the fate of the planet, while having to come to terms with his own lost past.

Surprise, another game! We snuck this one in last week:

F1 2019 (Console & PC)
The official video game of the 2019 FIA Formula One World Championship, F1 2019 challenges you to Defeat your rivals in the most ambitious F1 game in Codemasters’ history. F1 2019 features all the official teams, drivers and all 21 circuits from the 2019 season. This year sees the inclusion of F2 with players being able to complete the 2018 season with the likes of George Russell, Lando Norris, and Alexander Albon.

Free No Man’s Sky Update – Desolation
No Man’s Sky: Desolation,the latest free update, improves the combat experience and deepens the possibilities of space exploration. Sprawling derelict freighters have been discovered in space, deserted by all but their half-deactivated security systems and malfunctioning AI drones. Like much of the No Man’s Sky universe, every freighter is procedurally generated. There is a countless array of interiors to explore, with procedurally generated stories from the crew and the possibility of extracting pieces of the freighter to refit as upgrades into your own capital ship.

We’ve made new updates to the Xbox Game Pass mobile app! If you didn’t have it already, here is what you’re missing out on:

We are kicking off what is going to be a huge month for Perks with this batch below! Don’t forget to claim these Perk offerings through either your Xbox console, Xbox App on PC, or the Xbox Game Pass app on your iOS or Android device.

Sea of Thieves
Get a head start in the game thanks to a free Nightshine Parrot Bundle (available August 5) of cosmetics for your character and ship, and a windfall of 10,000 gold. Perfect for new players and seasoned sailors alike! Pay tribute to a pirate’s traditional sidekick by dressing yourself in the Nightshine Parrot jacket and hat, taking up the cutlass and bedecking your vessel with the matching figurehead and sails.

Naruto to Boruto: Shinobi Striker
Claim your 15 Esoteric Scrolls (available August 5) to obtain different customization items for your avatar, including costumes, weapons, and Ninja Tools. Play co-op with friends and compete in exciting 4 vs. 4 high-speed battles to become the ultimate ninja.

World of Tanks
Ready to dominate the battlefield? Then grab the Battle Masters Pack (available August 5)! Outfit your armory with the feared German Krupp-Steyr Waffentrager, the stalwart American M4A2E4 Sherman, and the resolute British Sherman VC Firefly. Add Premium Time on top to help you rise through the ranks and Gold to use on consumables, ammo and more and you’ll be unstoppable on the battlefield.

World of Warships: Legends
World of Warships: Legends brings two gunfighting warships to Xbox Game Pass Ultimate Perks! The Gunfighters Pack (available August 5) will help you progress in-game with the powerful Premium battleship Nassau, the fire-starting cruiser Budyonny, and 7 Days of Premium time. These will get you stuck into some epic gunnery duels in no time!

August Quests have arrived! There are dozens available, but here’s a few to note:

In addition, our Game Pass Games on the Go Quest is quadruple points this month

Check back for daily, weekly, and monthly Quests on your console or see all your Quests in the new Xbox Game Pass mobile app! Redeem points for more Game Pass, Xbox gift cards and giveaway entries.

There are great games coming soon to Xbox Game Pass, but there are some leaving soon too. Check the list of games below that are worthy of a proper farewell. Either pick up where you left off or use this opportunity to start fresh and get some game time in before they go! Remember, you can use your membership discount to get these games for up to 20% off while they are still in our library and play them any time.

Quick shout out to all the PC tiny rig builders who competed in the Xbox Game Pass for PC Grounded Tiny Build Challenge! Tune into Xbox Game Pass for PC Twitter to see all their tiny rigs, and vote for who built it best. If you want in all these games, perks, quests, rewards, keep tuned in here and get your first month of Xbox Game Pass Ultimate for $1. Cheers!