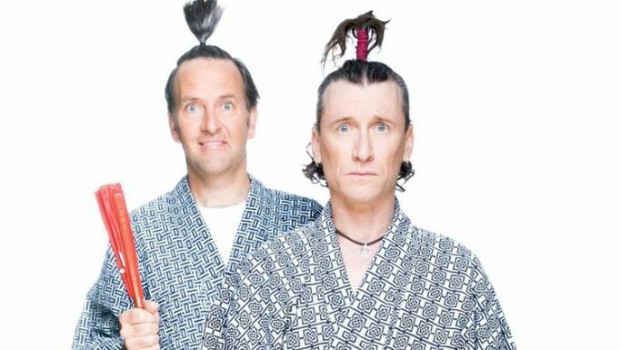 Two double act veterans, Colin Lane (Lano from Lano and Woodley) and David Collins (the hairy one from The Umbilical Brothers), have teamed up to take on a comedy duo from a whole other era – Gilbert and Sullivan.

In The 3 Mikados a casting mishap means only three actors and a pianist make it to the theatre. Colin and Dave are left with an orchestra of one, musical director John Thorn, plus one other actor as leading lady Yum Yum.

The production begins preview performances on Thursday 26 March 2015 at The Famous Spiegeltent, Arts Centre Melbourne, as part of the 2015 Melbourne International Comedy Festival, and officially opens on Wednesday 1 April 2015.

The 3 Mikados is a fast paced and hilarious run through all of the characters, songs and near beheadings from The Mikado that will surprise even the most hardened cynic. The cast take on multiple characters and tempers fray as Colin gives himself all the choice roles and leaves David carrying the spears.

The 3 Mikados offers a refreshing new take for G&S fans with faithful renderings of some of the operetta’s most popular songs. Colin and David hatched this plan while working together on a more traditional version of The Mikado. Rather than create a parody of the original this is the story of two idiots doing their best to mount their own Mikado – with limited success but riotous, feel-good results.

In almost 20 years as Lano and Woodley, Colin Lane and his comedy partner won the coveted Perrier Award for best show at the Edinburgh Fringe Festival, starred in their own television series and toured sold out shows across the country. They called it quits in 2006 with a national tour seen by more than more 125,000 people. Since then Colin has hosted Network Ten’s Ready Steady Cook and appeared in various theatre productions and TV programs including Spicks and Specks, Good News Week, Slideshow and the UK’s critically acclaimed Qi alongside Stephen Fry and Alan Davis.

As one half of the Umbilical Brothers, David Collins has performed around the world from the West End to Broadway, won two BAFTA’s, a Critic’s Choice and a Helpmann Award and even performed for the Queen.  As a dramatic and comedy actor he has popped up everywhere from All Saints to Australian film Maya the Bee and Happy Feet 2. He co-wrote and performed The Luck Child at Sydney Theatre Co, which was the recipient of Best Production for Children at both The Sydney Theatre Awards and Adelaide Fringe.

Librettist WS Gilbert and composer Arthur Sullivan wrote 14 comic operas together, the most famous of which is arguably The Mikado. It premiered at the Savoy Theatre in London on 14 March 1885 and played for some 672 performances, becoming the pair’s longest running hit. Within a year 150 other companies were performing the operetta in England and the United States. Over the past 130 years its influence has been felt around the world in politics, literature, film, popular music and television. Among the famous names to star in adaptations of the production are Eric Idle, Bill Oddie, Dudley Moore and even Groucho Marx.

Directed by Russell Fletcher who has himself performed with the Reduced Shakespeare Company, The 3 Mikados is an entertaining, funny and endearing new take on the high camp Gilbert and Sullivan classic.

Presented by Token Events, the show was written by Colin and David with a little help from Gilbert and Sullivan