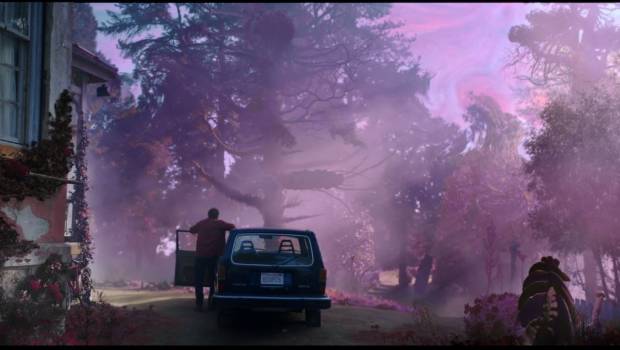 Colour Out of Space – Film Review

Those inclined to fantasy cinema will be aware of the presence and influence of acclaimed author H.P. Lovecraft. He was an acclaimed literary figure and famous for surreal storytelling within the horror and science-fiction genres, including the Cthulhu mythos, which is essentially a giant humanoid creature mixed with the features of an octopus and a dragon.

His work was first adapted by schlockmeister film producer Roger Corman and popularised by horror master Stuart Gordon with films such as Re-Animator (1985), From Beyond (1986), and many others. In fact, Oscar-winning filmmaker Guillermo Del Toro has unsuccessfully tried to develop a film adaptation of Lovecraft’s At the Mountains of Madness for years.

There are also films that are not direct adaptations but remain lovingly reverential to Lovecraft’s work. This is particularly apparent outside of Hollywood, including the works of Turkish filmmaker Can Evrenol who made the psychological character study Housewife (2017) and Japanese filmmaker Koji Shiraishi who made the found-footage contained thriller A Record of Sweet Murder (2014).

Lovecraft’s influence has been sustained. We now have the latest film adaptation of one of his works, Colour Out of Space. What makes this film extremely promising is the casting of Nicolas Cage and the return of Richard Stanley in the director’s chair.

Cage’s recent filmography is bizarre as he is thanks to films like the sci-fi revenge thriller Mandy (2018), the home invasion black comedy Mom and Dad (2017), the supernatural love triangle farce Between Worlds (2018), and many more. When one hears Cage is going to work with Stanley, who has not made a film since being fired from The Island of Dr. Moreau (1996), and has made sci-fi/horror cult classics like Hardware and Dust Devil on a film together, it would be acceptable if one reacted with bouts of joyful crying. But does Space live up to expectations?

Cage stars as Nathan Gardner, an alpaca farmer (yes, you read that right) whose family lives on a rural farm due to his wife, Theresa (Joely Richardson) and her medical discrepancies. The move from the city has affected the family, including the couple’s three children. Nathan feels neglected and Theresa is struggling to finish her work. Meanwhile, their daughter, Lavinia (Madeleine Arthur), has turned to religious forces, including Pagan Witchcraft and performs rituals for her mother’s ailments. Their eldest son, Benny (Brendan Meyer), has become a drug addict thanks to associating with the local recluse, (Tommy Chong, of course), while their youngest son, Jack (Julian Hillard), is anti-social and spends most of his time talking to the family dog, Sam. 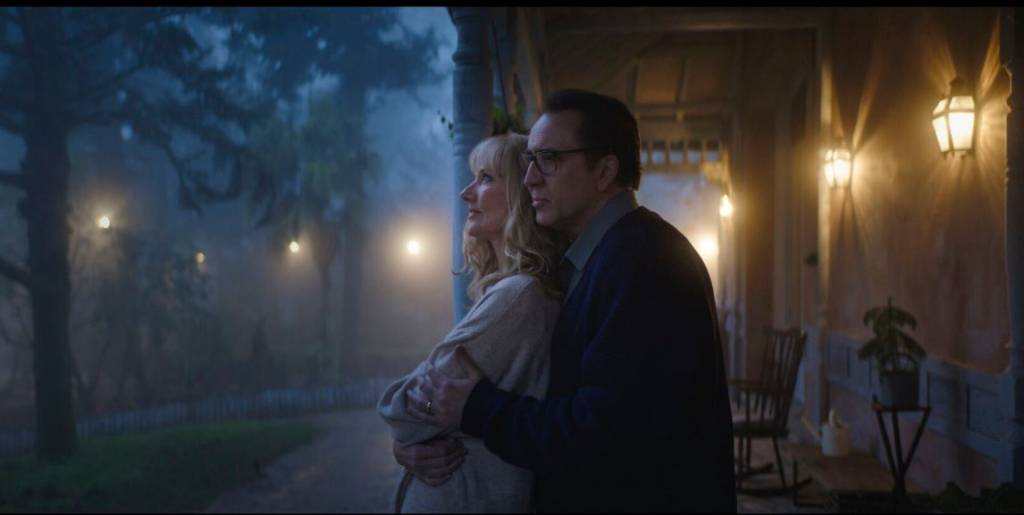 Their life takes a strange turn when a meteorite crash-lands onto their property. The presence of it comes with an extraterrestrial being that affects the family through its garish use of colour. It also affects the environment around them including the flora, fauna, and especially the water supply. With very little support from the authorities and the townspeople, accept the local hydrologist, Ward (Elliot Philips), the family breaks out of their innate skepticism and realise the great threat looming over them. Consequently, they put their foot down and decide to fight back.

Does the film live up to the hype? You bet it does! It features not only Cage’s heightened talents that perfectly align with the story, but also Stanley’s rejuvenated sense of filmmaking prowess that we have not seen in decades. The few films that Stanley has made over his career are all justifiably cult classics. They possess a sense of escalating and organised chaos either in terms of style or the implementation of genre that lends exhilaration to the storytelling. In the case Space, Stanley brings back that quality in spades.

Stanley and his co-writer, Scarlett Amaris, also share a loving reverence to the source material. There are many references to other Lovecraft works and other sci-fi masterpieces, such as John Carpenter’s The Thing (1982). It is very well-realised on-screen and balanced with a sense of maverick unpredictability, as shown in scenes where characters switch between moods of self-awareness and utmost sincerity (i.e. the use of the character Jack and his curiosity or the casting of Chong as Ezra). It also applies to the filmmaking where scenes are shown as either farcically self-parodic and utterly haunting.

Even if Stanley had all the money and production values in the world, and that is not to criticise the efforts of composer Colin Stetson, the SFX team, and cinematographer Steve Annis who contribute to the cosmic, psychedelic feel, Stanley would have to lend a guiding hand to mesh these contributions together. It sounds impossible but director Stanley has the ultimate weapon at his disposal: Nicolas Cage. Cage has had the public persona of being a meme machine where his prolific ways of acting have painted him as a nutcase. Not to be disparaging but whatever you may think of his skills it is impossible to take your eyes off his work.

In the case of Space, Cage is the glue that keeps the horror grit and the bonkers funhouse parodic feel together. He elevates what could have been a tonal disaster into a gonzo theme park fantasia of otherworldly delights. His utmost commitment to the role is amusingly eccentric (his love of alpacas is infectious) to hilariously overwrought (his character’s obnoxiousness is eerily Donald Trump-esque) and surprisingly intense (such as when his character realises the stakes of the story).

His performance complements Stanley’s storytelling by lending a feeling of escalating tension and anxiety that conveys the indescribable and unfathomable chaos the characters face. That is not to say the supporting cast are slouches either as most of them have previously worked within the horror genre. They all give fantastic performances that not only sell the fear but match Cage’s presence. 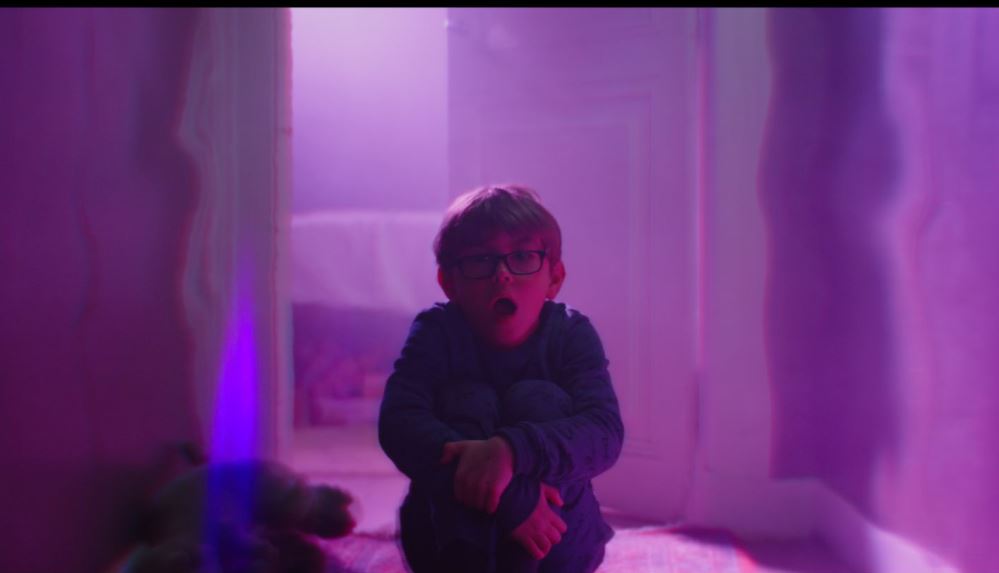 Richardson is convincing as the high-strung and gradually self-damaging matriarch while Arthur is very good as the receptive daughter who catches on to the strange events. Meyer is believable as the complacent son of the family and Hillard is amusingly oddball as the youngest son. He adds another notch to his belt of stellar genre fare, including the bizarro-comedy Greener (2019) Grass and the horror mini-series The Haunting of Hill House (2018).

While eventful, there is a lack of coherency, particularly regarding the exposition and the explanation of the events. In terms of narrative satisfaction, there won’t be much of it for those who like their stories neatly tied up since its conclusion is ambiguous. The film also features a heightened tone that is polarising. If one does not appreciate the first ten minutes, that person should leave. The film is more about the journey than the destination. For the more adventurous viewers, Colour Out of Space is a visually spectacular, insanely exhilarating, and unfathomable piece of work that could only have come from the minds of Lovecraft and Stanley. Highly recommended.

Summary: Colour Out of Space is a visually spectacular, insanely exhilarating, and unfathomable piece of work that could only have come from the minds of Lovecraft and Stanley. Highly recommended.