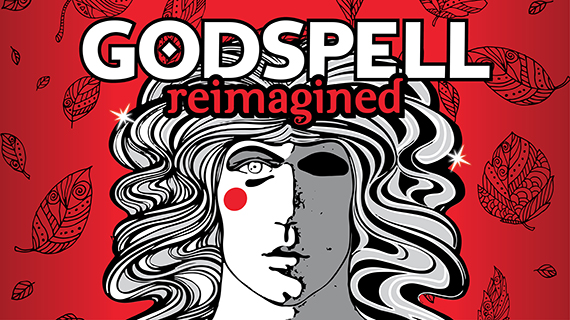 MELBOURNE, FRIDAY 9 SEPTEMBER 2016 — Arts Centre Melbourne is delighted to announce that the star of the original Australian production, Colleen Hewett, will be the special guest star of the Melbourne season of Godspell Reimagined.

Featuring a stellar cast including Mark Dickinson, Bonnie Anderson and Christopher Southall, the international music theatre favourite Godspell is set to return to Melbourne to take audiences on a heartfelt and exhilarating ride of peace, love and joy at Arts Centre Melbourne’s Fairfax Studio from 25 October to 6 November 2016.

Based on the story behind the Gospel of St Matthew, Godspell dramatizes the final days of Jesus Christ, featuring rock and roll music set to lyrics from traditional hymns and is a celebration of love, joy and humanity. The musical features the song Day By Day which became a smash hit in the 70’s for Colleen Hewett, as well as classic hits such as By My Side, Prepare ye The Way Of The Lord, Save The People and All For The Best.

“Godspell has been a big part of my life and it’s fabulous to be part of the reimagined production in 2016. I’m especially pleased to be appearing with this wonderful young cast because I love it when young new talent gets a go,” Colleen said.

“Over the years I have met so many people who saw the original production and I hope they will all come and relive it all over again.”

While the funked up production’s premise remains faithful to the 1971 off Broadway original, this version of Godspell has been reimagined to incorporate the band and cast into one creative community on stage and also includes a plethora of contemporary additions including street dance and urban acrobatics.

Originally conceived by renowned American playwright and director John-Michael Tebelak and composed by Stephen Schwartz (Wicked / Pippin), Godspell hit off-Broadway in 1971 and came to Melbourne soon after opening, boasting over 500 sold-out performances from 1971 to 1972.

The Melbourne cast includes Mark Dickinson, whose theatrical credits include Irving Berlin’s White Christmas (Sheldrake), the original UK cast of Disney’s High School Musical, the original West End cast of The Drowsy Chaperone and Les Miserables – including a performance for the Royal Family at Windsor Castle. Since returning to Australia, Mark has featured in various performances including As You Like It and Hamlet for the Australian Shakespeare Company and CHESS, Guys and Dolls and Promises Promises for The Production Company.

Making her theatrical debut in the performance is Bonnie Anderson, winner of Australia’s Got Talent as a 12 year old in 2007. Now 19, Bonnie released her debut single Raise The Bar in late 2013 and completed an Australian tour with Olly Murs in 2015.

From the same producers as At Last – The Etta James Story with Vika Bull, The Man in Black with – The Johnny Cash Story with Tex Perkins and the recent sell-out hit Tapestry with Debra Byrne, the cast also features Christopher Southall and Louisa Fitzhardinge.