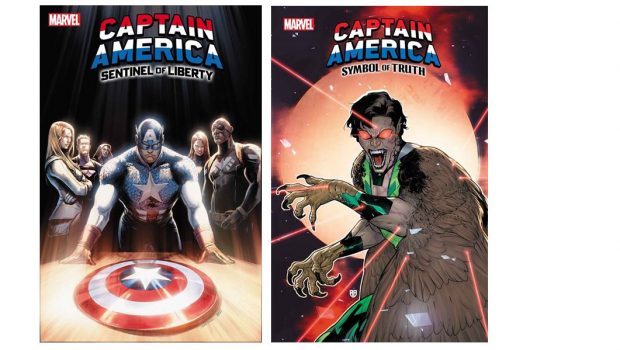 The current era of Captain America is in full swing with CAPTAIN AMERICA: SENTINEL OF LIBERTY and CAPTAIN AMERICA: SYMBOL OF TRUTH delivering suspenseful and gripping saga starring Steve Rogers and Sam Wilson! With new villains rising, old allies joining the fight, and shocking secrets about the very foundation of Captain America’s legacy emerging, both titles are heating up ahead of COLD WAR, next year’s CAPTAIN AMERICA crossover! COLD WAR will bring both Steve and Sam’s current adventures together in an epic that will leave a lasting impact on the CAPTAIN AMERICA mythos and the groundwork has already begun! Get a hint at upcoming developments with a special peek at what’s to come in December!

In CAPTAIN AMERICA: SENTINEL OF LIBERTY #7, writers Collin Kelly and Jackson Lanzing and artist Carmen Carnero begin a new story arc titled “THE INVADER!” Just when Captain America is ready to quit his pursuit of the Outer Circle, he receives intel on their next move – and a reminder that Steve Rogers is never without friends. Sharon Carter returns to help Steve assemble his allies for a new mission – but some shadows reach farther than even the world’s best spies can predict. Guest-starring Nick Fury, Black Widow, Hawkeye, Sharon Carter and Peggy Carter!

Over in CAPTAIN AMERICA: SYMBOL OF TRUTH #8, writer Tochi Onyebuchi is once again joined by guest artist Ig Guara as Sam Wilson’s high-stakes mission in Wakanda continues. As Falcon’s condition worsens, Captain America comes face-to-face with the unintended consequences of his escalating conflict with the White Wolf. Nomad is willing to make the compromises necessary to take down the Black Panther’s errant brother, but can Sam Wilson say the same? And what is Sam’s old sparring partner Nightshade doing in Mohannda, anyway?

See Marvel’s greatest spies band together and witness Nomad’s terrifying transformation in both covers below and stay tuned for more CAPTAIN AMERICA news in the weeks ahead! For more information, visit Marvel.com.