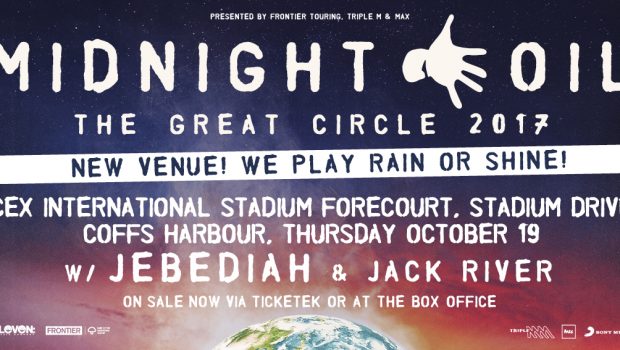 Due to significant weekend rainfall, and the forecast of more rain over the next 72 hours, Coffs Harbour City Council, Frontier Touring, John Logan Entertainment and Midnight Oil management have met and reviewed the site for Midnight Oil’s show on Thursday 19 October.

In the interests of public safety and the overall enjoyment of the event for attendees, the decision has been made to move this concert from the Hockey Fields to the nearby C.ex Coffs International Stadium forecourt.

While rain is not currently forecast for Thursday evening, the C.ex Stadium forecourt will be much firmer underfoot than the currently waterlogged Hockey Fields. Limited tickets still remain available for this hugely anticipated show.

All other organisational details – including show times, bar, food and conditions of entry – remain the same.

Additional buses are being organised as car parking will be at a premium. Event organisers encourage ticketholders to car pool where possible, and to use park and ride locations to catch the free buses to the venue.

Ticketholders are recommended to keep an eye on the websites and social media of Midnight Oil, Frontier Touring, Coffs Coast, John Logan Entertainment and Triple M for further updates.