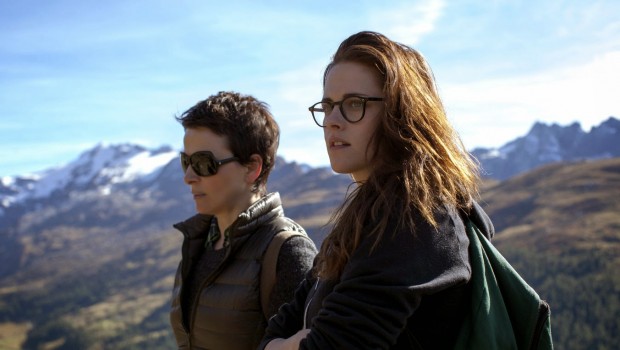 At the beginning of Olivier Assayas’ Clouds of Sils Maria two women are on a train heading to a location in the Alps. They are Maria (Juliette Binoche), a seasoned actress, and Valentine (Kristen Stewart), her much younger assistant who lives off her phone. Maria is preparing for her divorce and expecting to give a tribute to the director who cast her in her starring role when she was eighteen. Twenty years ago she played the character of Sigrid, who was involved with an older woman and it’s a part she refuses to relinquish. Valentine reveals to Maria that the director has suddenly died, meaning she must adjust the kind of tribute to the man she once knew. At the dinner, Maria is propositioned by a director who wants her to feature in a new version of the play, only this time she’ll be playing the older female role of Helena. She’s encouraged by Valentine to take the role but reluctant to leave Sigrid behind. The new girl playing Sigrid is Jo-Ann Ellis (Chloe Grace Moretz), who features in the news as a reckless brat but is also a successful mainstream actress. Meanwhile, Valentine and Maria rehearse lines of the play together in the countryside. Their readings and interpretations of the play cast ambiguity over the nature of their relationship. 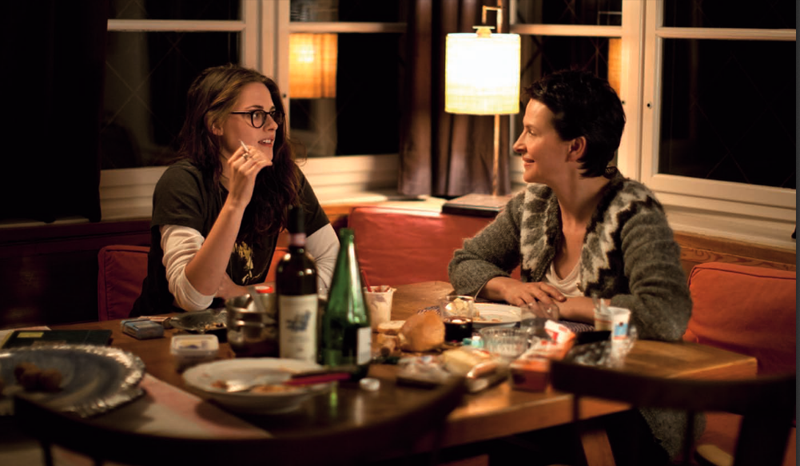 Comparisons between Clouds of Sils Maria and films with similar thematic content about fame, the film industry, stardom and generational conflict are inevitable. Two similar films include Birdman and David Cronenberg’s Maps to the Stars, which are both concerned with stars clinging to their last strands of cultural relevancy in a changing industry now dominated by much younger stars. Clouds is not a grotesque satire like Cronenberg’s film, nor as stylistically or formally sophisticated as Birdman. Instead, Assayas’s film employs distinctly European properties, despite the majority of the film being in English and featuring American actors. The actors are filmed close to the frame and the use of music is left only to very select moments. The pacing is also very leisurely, which will be testing for some viewers. The content of the film further dictates its shape and European form. Rather than unfolding as a linear narrative of events, Clouds is driven almost entirely by lengthy dialogue exchanges. The distinct shape of the content is most noticeable at the film’s midpoint, where Valentine and Maria’s rehearse the play together. Occasionally, the film unearths a visually broader cinematic form, specifically the wider expanses of the countryside. These exterior landscape shots reflect an important thematic idea about differing perspectives and interpretations. 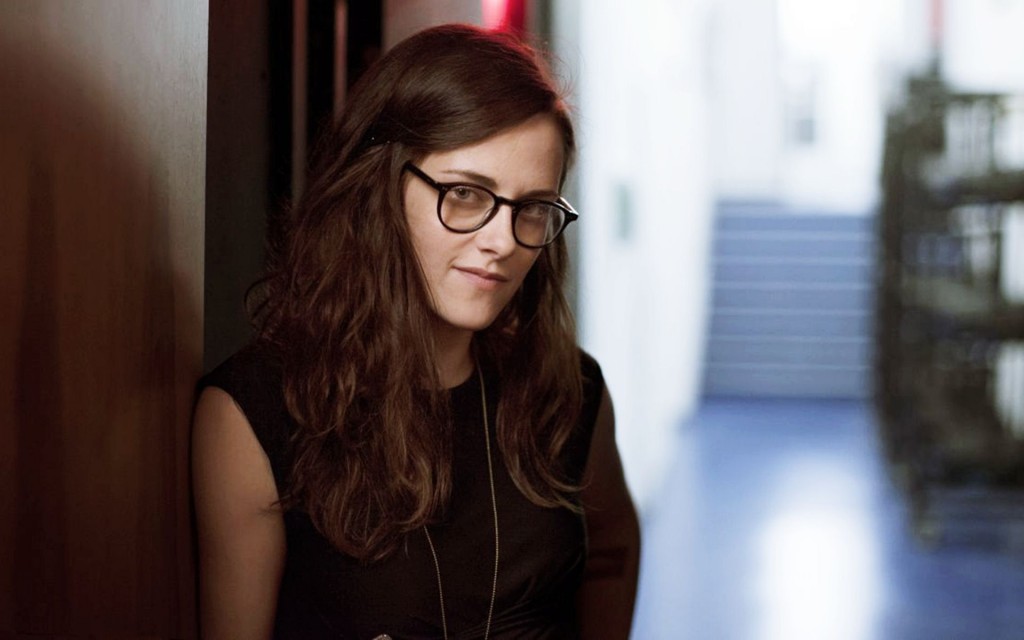 The contrasting viewpoints of the characters and the audience makes Clouds stimulating and challenging. While it takes time to warm to the film, the middle point where the two women read the play together offers understated but mesmerising conflict and deep metafictional layering. It’s suggested but never outrightly spoken that the parts the women are reading mirrors their desires for each other. The dramatic hook is their sexual ambiguity but shrouding the truth prolongs the narrative’s central dilemma: whether Maria will embrace a younger generation and accept her own fragile mortality. Resisting the older part and potential feelings for the younger Valentine momentarily stifles her fading existence. It’s a unique and sophisticated means of building conflict through a psychological test of age and time. Equally strong is the contrast in acting styles of the film’s women in these dialogue scenes. Bionche’s style is theatrical, brimming with high energy and melodramatics, while Stewart’s readings are dry and less emotional because she’s not playing an actress with thespian skills. Showcasing their chemistry are their downtime scenes where they debate the state of Maria’s career. In one notable sequence, they watch a lousy 3D sci-fi movie together which stars Jo-Ann. Afterwards, Valentine explains the film and interprets its meaning to Maria who scoffs and dismisses it as trash. She’s smug and dismissive of her ideas. These scenes further stipulate Maria’s internal conflict: an inflexibility to adapt in the modern world where young people are sophisticated and professional but also self-preserving. In some closing scenes, Chloe Grace Moretz has scene-stealing moments, appearing sweet, cultured and well-mannered and then in the flash of a smile she unveils the ruthless ownership of her role. 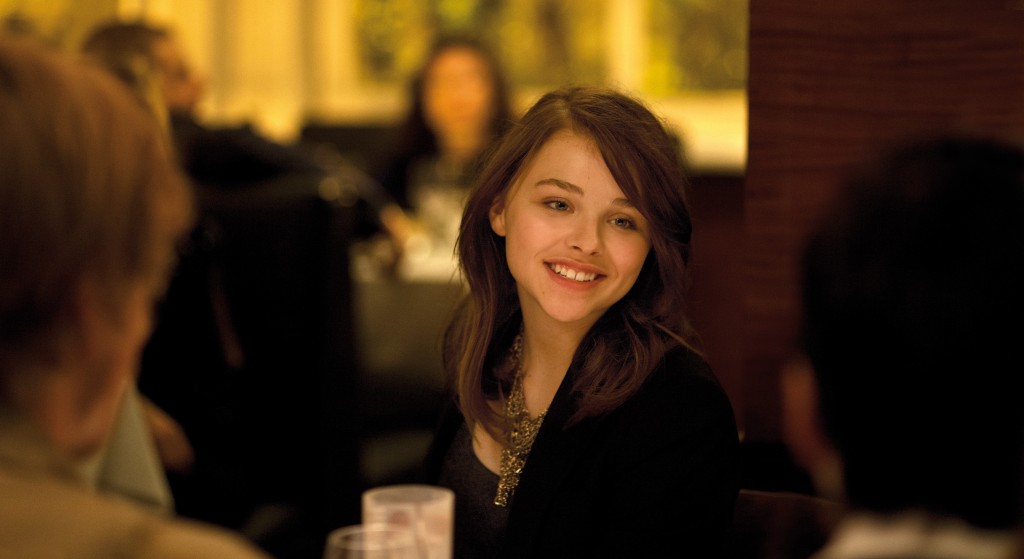 This isn’t an easy film to watch given it forgoes a conventional narrative structure in favour of densely packed scenes of dialogue and a stubbornnes to draw solid conclusions. It would have benefited from tighter pacing over its two hour running time. Rhythmically, this film is disjointed. After what appears to be a finale in the countryside, the film proceeds into a necessary but long epilogue. After this extensive journey, Maria’s adaption to the modern filmmaking world remains open to interpretation. But simultaneously, this ambiguity about the desires of the characters remains a pleasurable talking point. What happened for example in the strange sequence where Valentine is driving by herself but stops to throw up? But isn’t that more valuable than having all the answers neatly laid out at the end? It’s further testament to the chemistry of Stewart and Binoche that their scenes together, like a female buddy movie, are stimulating and funny. It’s a film about someone remaining in denial about her own humanity and age against an evolving industry. The title also references the alternate perspectives, like the way people see different shapes in the sky or how they might interpret a piece of art or a film. Likewise, anyone seeing the film will have a contrasting viewpoint of how they determine the story’s meaning. For both the main character and the audience, it’s a cautionary reminder about keeping an open mind.

Summary: Anyone seeing the film will have a contrasting viewpoint of how they determine the story's meaning.