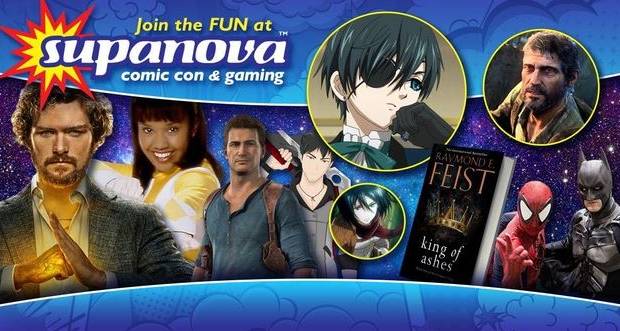 Close Encounters Of The “Supa-Star” Kind! Supanova To Need A Bigger Boat In Sydney And Perth This June!

Starring in two seminal Spielberg films in the ‘70s, Jaws and Close Encounters Of The Third Kind, Dreyfuss is one of the most establish and prolific talents in the industry; while Turner has dominated both film and TV equally, from launching into the spotlight with Romancing the Stone, to voicing the infamous Jessica Rabbit in Who Framed Roger Rabbit.

But that’s not all… Supanova have also announced further guests to their June lineup, including one of the most harrowing and haunting villains of all time, Star Wars icon Ian McDiarmid, aka Emperor Palpatine.

Appearing in both the original and prequel trilogies as The Emperor, Scottish talent McDiarmid is one of the few actors who can say he has done both, while also featuring in Sleepy Hollow, The Lost City Of Z and more.

Then there’s homegrown talent Eliza Taylor, who started her acting career in true-blue Australian form with television shows such as The Sleepover Club, Blue Heelers and Neighbours, before landing the series lead role of headstrong Clarke Griffin in the popular post-apocalyptic science fiction drama The 100.

With plenty of DC talent among the ranks, pop culture favourite Rosario Dawson – who is probably know best as Claire Temple across Netflix’s The Defenders, Daredevil, Luke Cage and more – represents Marvel, joining her Iron Fist co-star, Finn Jones (Game Of Thrones) at both events. She’s also known for her roles in Men In Black II, Clerks II and both Sin City films and as the voice of Batgirl in The Lego Batman Movie and Wonder Woman for the DC Animated Universe.

Aussie actor Peta Rixon (Mighty Morphin Power Rangers: The Movie), as a Sydney exclusive, is joining her Power Rangers co-stars David Yost and Karan Ashley; while voice actors Kara Eberle (RWBY) and Elizabeth Maxwell (The Legend Of Zelda: Breath Of The Wild, Attack On Titan) will also make the trip this June.

And there will be more!

Other guests scheduled to attend the expo include: