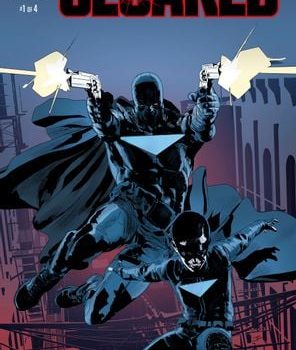 Summary: A really good take on a more realistic hero who’s willing to cross any line, including killing, to achieve results in reducing crime in his city. The first issue helps establish the mystery on the hooded vigilante and we’re left wondering about West’s objective in hiring an ex-cop known to use illegal and unorthodox means in his work.

Comic and film fans out there are all too familiar with the story of Batman. A masked vigilante, with no powers for that matter, is out to dispense justice to all wrongdoers. We are all familiar with his code of ethics and how he is not supposed to kill, despite being tested countless times. However, Cloaked #1 is not a story about Batman, but is about a superhero who is not limited by anything; as it explores a more realistic and darker version of the masked vigilante known as The Reaper.

Cloaked #1 opens with a hostage situation between the police and armed robbers inside a bank. Soon after, we are introduced to the vigilante, who crushes a black car through the bank’s window. Unlike what we are used to, The Reaper kills all the armed robbers before leaving in the car that he came in. Tales of the vigilante spread across the city, but then just as he had appeared, he disappeared.

Cloaked #1 main story is explored through the life of a low-rent private detective Roger “Jake” Stevens, who gets summoned by a well-known billionaire Byron West. In the meeting, West establishes that he wants Jake to find The Reaper with the promise of having a lot of money. The hunt for the vigilante leads him to meet with his former partner in law enforcement, who directs him to one other person who was always with The Reaper, his sidekick Dick Johnson. The mystery only intensifies when the sidekick narrates how most of the meetings with the vigilante went, and that the only time he ever saw his real face was their first meeting only. The following series of panels and pages leads me to believe that there is more to the gun-slinging vigilante when we see him walk away with one briefcase full of cash found on the scene. That night, Dick is found dead.

I must admit, I did not expect this from the Cloaked #1 story. I expected to see another superhero limited with some form of social or moral code. But that’s not the case with this first issue. Instead, The Reaper is not afraid to kill the criminals, seems to “steal” from the people he has killed and is willing to go even further as using a child, Dick Johnson, as bait. Besides this, Cloaked #1 pages where we encounter the vigilante are well-drawn and dramatic, highlighting the vigilante’s ruthless nature. However, I find the comic’s lack to render the eyes a little bit disturbing where on the lighter panels, and pages, the characters seem emotionless, blocky, and not human. This kinda diminishes the comics overall artwork.