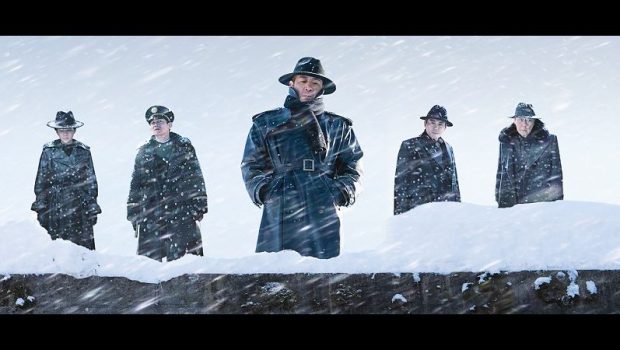 Summary: If you know your history about this period of WWII you will get more out of this than I did. I could not follow it that well.

Set in the 1930s puppet state of Manchuria after Japan has invaded, a team of Communist spies trained in the USSR are on a secret mission to rescue to only survivor of notorious camp 731 and expose Japan’s crimes against humanity to the world. Things start off badly after the group lands and splits up and find out they have been betrayed by a traitor and the operation is compromised. Each group has no way to contact each other and do not know who to trust.

Nice movie but just not enough snow, jokes, there is so much snow in this. Aerial shots of snow, snowy rooftops, foot chases through snow-covered streets, blowing snow, cool looking snow on hats and ice on windows. This movie looks very cold.

What is does suffer from is from the old line “the guy in the hat shoots the other guy in the hat” I lost track of who was meant to be on each side. It does not help that they do not really have any Japanese soldiers in this film which would make it easier.

The Chinese who are supporting the Japanese are up against the Communist spies. There are secret messages that pop up and are burned and they are really secret as they are not captioned in the print I saw which makes it difficult as they are important to the plot.

To be honest the Age of Shadows did this sort of story better with the secret agents and better-defined characters. It even found the time for light relief in the form of baby poo-bum, something that this film seems to forget as it is all so serious.

I have seen quite a few Zhang Yimou movies, even the Great Wall which was not as terrible as everyone was making out. This has a lot more energy than something like Shadow, which was a lot slower and had more time for contemplation.

What is good about it much like the Age of Shadows is that it is a “team on a mission” movie in the Eastern theatre of World War II (or just before), something that does not seem to come up as much as there are so many against the Nazis it is now a cliché.

I would recommend this if you would enjoy a spy movie set in this period of history and know a bit more about this region so you can follow what is going on better than I managed to.