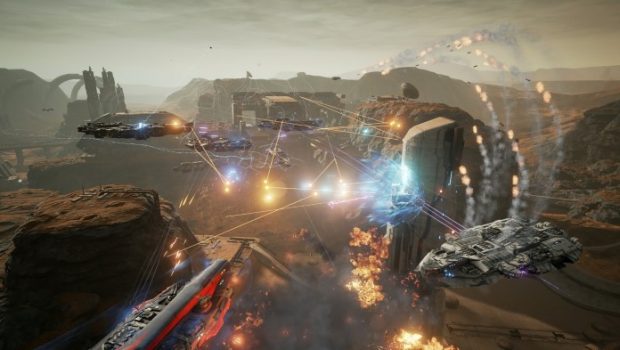 ANAHEIM, Calif. – Dec. 3, 2016 – Grey Box, Six Foot and independent developer YAGER have revealed that Dreadnought, the class-based spaceship action game, will be coming to the PlayStation®4 computer entertainment system next year. Announced today with a new gameplay trailer at PlayStation Experience 2016, Dreadnought will make its console-exclusive debut on the PlayStation®4 system with a closed beta beginning in 2017, which eager captains can sign up for now at www.dreadnought.com/ps4.

“Dreadnought is all about mastering your ship and coordinating with your teammates to reap the glory and rewards of victory,” said Christian Svensson, chief operating officer of Six Foot. “It features stunning spectacles of high-impact combat across the solar system, and we’re incredibly excited for the PlayStation community to experience that fun for themselves soon.”

Developed for the PlayStation®4 system by lead-developer YAGER and Iron Galaxy Studios under the direction of Six Foot and Grey Box, Dreadnought puts players in command of massive, powerful spaceships at the centre of tactical team battles across a variety of competitive online multiplayer game modes. There are more than 50 playable vessels, each of which can be customized with a range of weapons, modules and cosmetic upgrades. There are five ship classes, specializing in vital roles like frontline assault, long-range bombardment, strategic support and more.

Dreadnought is currently in closed beta on Windows PC and will eventually fully launch as a free-to-play title on both Windows PC and the PlayStation®4 system. For additional updates as development progresses, please follow Dreadnought on Facebook, Twitter and Twitch.

Grey Box is a video game publishing brand that champions the idea that games are an influential art form and players should be treated as sophisticated consumers. Grey Box aims to set a unique standard for quality in interactive entertainment. www.greybox.com

Six Foot was founded in 2000 as an interactive agency, building digital experiences designed to make connections between people, brands and technology more human and meaningful. Now, as a full-service games company with offices in Houston, Los Angeles and Berlin, we apply that same passion to building extraordinary video games and providing creative direction, marketing and brand management, front- and back-end development, customer service and community support for game publishers. www.6ft.com

Founded in 1999 in the heart of Berlin, YAGER is one of the gaming veterans of AAA development. The award-winning studio is dedicated to the creation of vivid and meaningful multi-platform gaming experiences. The YAGER team comprises gaming enthusiasts, technical experts and creative minds from across the world who all share a passion for great action games. YAGER was most recently recognized for its gripping military shooter Spec Ops: The Line. www.yager.de

Iron Galaxy is one of the world’s largest independent video game developers, delivering both home-built, original experiences and their partners’ visions to all platforms. Founded in 2008, Iron Galaxy has touched an astonishing number of projects, large and small. www.irongalaxystudios.com