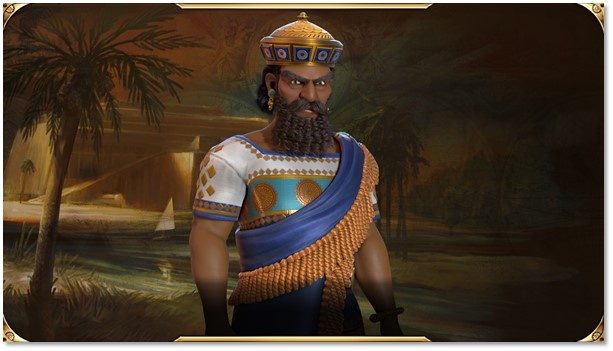 Hammurabi, sixth king of the First Babylonian dynasty, is best known for establishing the Code of Hammurabi. It is one of the first known laws to emphasize physical punishment for crimes, but also established the presumption of innocence, otherwise known as “innocent until proven guilty.”

Babylon’s “Enuma Anu Enlil” ability makes Eurekas provide full Science bonus towards technologies, but decreases the amount of Science generated each turn. Hammurabi’s “Ninu Ilu Sirum” ability enables him to construct the lowest Production cost building in each specialty district for free for the first time that district is built. It also grants a bonus Envoy when any other district is constructed for the first time; the ability does not apply to the Government Plaza.

The Sabum Kibittum is a unique Ancient Era melee unit with increased Movement and Sight, with additional Combat Strength against Heavy and Light Cavalry. Babylon’s unique building is Plagum: unlocked through Irrigation, this replacement for the Watermill provides additional Production and Housing, and increases Food generated by all Freshwater tiles – the city must be adjacent to a river.