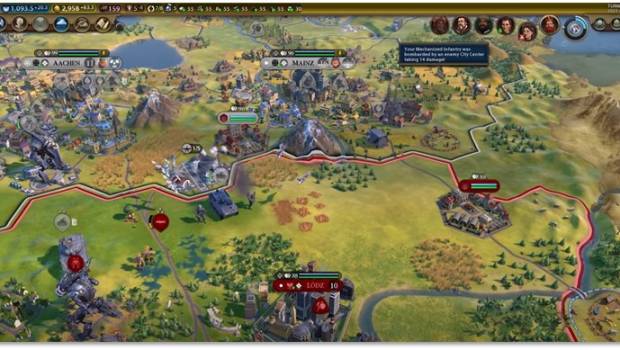 In addition to balance and update changes, each game update includes a new feature, such as a scenario, game mode or customization. This month’s update includes the Barbarian Clans optional game mode*, the Leader Selection Pool and several balance adjustments and additional changes based on player feedback.

Barbarian Clans is a new optional game mode that completely changes how players will interact with the Barbarians. Driven directly by player feedback, gameplay with Barbarians has been greatly expanded beyond the standard kill-or-be-killed option. This mode introduces six Barbarian Clans that can be found living on or near different map conditions, each specializing in a different type of unit. Barbarian Clans accumulate progress each turn to convert to a city-state; players will be able to help or hinder their progress.

Destroying a clan will wipe it off the face of the map as usual, while choosing to Raid a clan will earn Gold and knock down some of the progress. Players can stop a clan from attacking their cities by paying a Bribe and also Hire a clan to add its strongest unit to their army. Units that are abducted can be retrieved by paying a Ransom and – of course – players can also spend Gold to Incite them and have them attack another civilization. Exchanging coins in these civilized encounters will boost the clan’s progress toward conversion to a city-state.

Similar to the Natural Wonder Picker and City-state Picker, the February update introduces the Leader Selection Pool. This feature allows players to customize the pool of leaders that can be used in the game. Find Trajan to be too big of a bully or want to play against a leader you haven’t faced before? This is now possible thanks to the Leader Selection Pool!

Finally, the February update introduces some new adjustments to the AI and balance changes. Driven again by player feedback, the bulk of AI adjustments will focus on air units and air combat where they deploy anti-air defences and engage in air strikes more frequently. Policy slots have been shifted for certain governments to more accurately reflect how those governments would run in reality and better align to anticipated playstyles. Some Natural Wonders have also been rebalanced plus additional text clarifications; many fans may be pleased to learn the Cliffs of Dover will now grant three Gold, three Culture and two Food. Full details will be available in patch notes that release alongside the update on February 25.

The February game update is one of many free updates that are a part of the overall content roadmap for Civilization VI, available to anyone who owns the game.