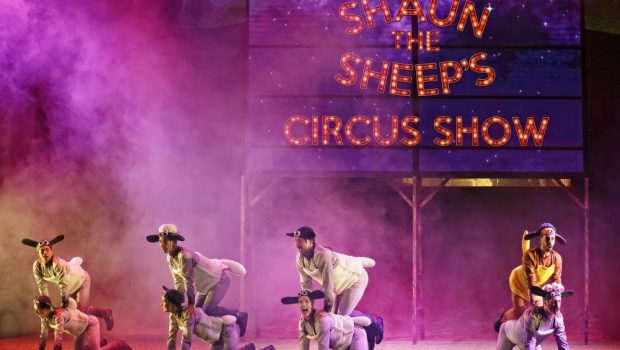 Arts Centre Melbourne have teamed up with Australian circus company Circa and Academy award® winning studio Aardman to bring audiences Shaun the Sheep’s Circus Show at the Sidney Myer Music Bowl from 5 – 9 January 2022.

Aardman’s signature Shaun the Sheep animation is combined with live performance from Circa, simultaneously blurring the lines between movement, dance, theatre and circus.

Circa Artistic Director Yaron Lifschitz and the ensemble capture all the sophisticated and challenging elements of Circa’s extreme physicality while embracing the fun, humour and playfulness found in the world of Shaun the Sheep.

“Shaun the Sheep is a playful, rambunctious feast of humour, good spirits and the triumph of the little guy. The medium of circus is a perfect vehicle for bringing these qualities to the stage,” said Lifschitz.

“Melding the worlds of stage and screen and incorporating the extreme physicality of circus without losing the emotional depth and charm of the original is a major creative challenge – it’s the sort of thing we at Circa thrive on.”

Circa Contemporary Circus is one of the world’s leading performance companies. Since 2004, from its base in Brisbane, Circa has toured the world-performing in 40 countries to over 1.5 million people. Circa’s works have been greeted with standing ovations, rave reviews and sold-out houses across six continents.

Aardman, based in Bristol (UK) and co-founded in 1976 by Peter Lord and David Sproxton, is an independent and multi-Academy Award® and BAFTA® award winning studio. It produces feature films, series, advertising, games and interactive entertainment – current animated productions include; brand new 2021 holiday specials Robin Robin and Shaun the Sheep: The Flight Before Christmas, CGI series Lloyd of the Flies, a new stop motion series for pre-schoolers The Very Small Creatures and a Chicken Run movie sequel.

Arts Centre Melbourne, QPAC, Screen Queensland, Merrigong Theatre Company and Circa with Shaun Comerford and Yaron Lifschitz present Shaun the Sheep’s Circus Show by special arrangement with Aardman based on the television series Shaun the Sheep devised by Richard Starzak.

“…Shaun the Sheep Circus Show is so entertaining, and so packed with physical marvels, that no child who sees it will ever forget it.” – Sydney Morning Herald

“…an imaginative journey… There were many breathtaking moments.” – Limelight Magazine

“Whoever says sheep don’t fly, has clearly never seen the extreme physicality and awe-inspiring feats that feature at the core of Circa shows. If modern circus portrays characters and tells stories, then Shaun The Sheep’s Circus Show is modern circus at its playfully charming best.” – Blue Curtains Brisbane

Shaun the Sheep’s Circus Show has been supported through the Restart Investment to Sustain and Expand (RISE) Fund – an Australian Government initiative and by the Queensland Government’s Queensland Arts Showcase Program (QASP).
Circa acknowledges the assistance of the Australian Government through the Australia Council, its arts funding and advisory body and the Queensland Government through Arts Queensland.
Arts Centre Melbourne and Circa respectfully acknowledge the Traditional Owners and Custodians of the lands, waters and seas on which we work and live paying respects to Elders, past, present and future.

Duration: 100 minutes including a
20-minute interval

Age Recommendation: suitable for all ages