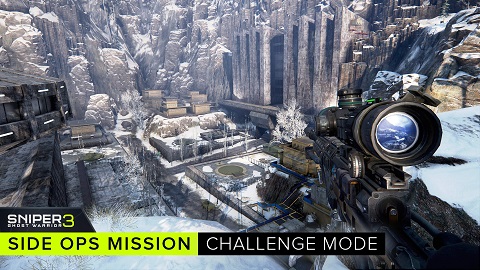 Sydney, 24th March 2017 – The developers at CI Games, creators of the Sniper Ghost Warrior and Lords of the Fallen series of games, aren’t afraid of giving experienced sniper players a high difficulty for a more challenging overall experience. Today, they would like to introduce fans and newcomers to the series to a new mode in Sniper Ghost Warrior 3 – Challenge Mode.

In the open-world setting new to Sniper Ghost Warrior 3, Side Ops are large side missions where players can move freely throughout the area, albeit avoiding enemies along the way. Watch the video to see a Side Ops mission in action with Challenge Mode added to it.

Long-time fans of the Sniper Ghost Warrior games have asked for a mode that will challenge even the best players, and Challenge Mode offers plenty of challenge. With a missing heads-up display (HUD), increased enemy perception, and enemy markers that disappear after using the surveillance drone, successfully completing missions in Sniper Ghost Warrior 3 will require a well-equipped arsenal of weaponry and plenty of gadgets and attachments to make it through undetected.

“Challenge Mode is one of my favorite features in Sniper Ghost Warrior 3, because of how much importance it places on the skills of the player rather than relying on the game for help,” said Tomasz Pruski, senior level designer at CI Games. “A good example is when using the drone. It will tag the enemies, but once called back, players will need to rely on their memory to remember where the enemies are located inside the outpost. Precisely aimed headshots are also required, since enemies are more heavily armored on their body.”