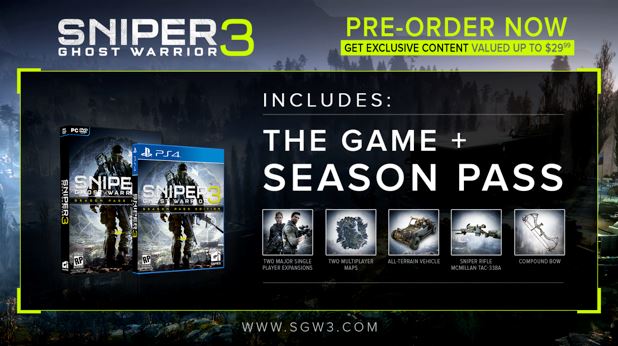 “We have a long-term investment in our community and believe that this season pass is a huge value to them,” said Marek Tymiński, CEO of CI Games. “The content within the season pass has variety to it, and we’re committed to provide support and additional content throughout 2017 for our largest game to date. The major part of the edition will be the single player campaign ‘The Sabotage’. This is one we’re quite proud of where players will follow the story of the separatists and experience everything from the other side of the conflict making the story more being in the grey zone than black and white.”

In addition to the highlighted extras below, CI Games plans to roll out exclusive content drops and special events that will enhance the game throughout 2017.

The season pass on PS4™ and PC includes the following:

Sniper Ghost Warrior 3 launches on the PlayStation®4 system and Windows PC on April 4, 2017.