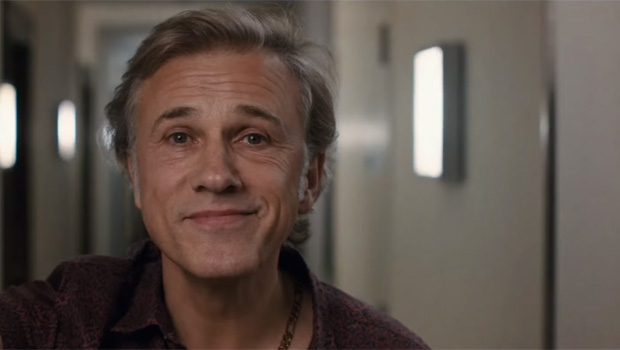 What drew you to want to take part in this film?

Look, um, I… referred to the decision to participate in a movie or I, I draw analogy to airplane crashes, because there’s never one single reason that brings an airplane down.  A lot of unfortunate um, eh, occurrences have to coincide and line up in one straight line to make an airplane crash.  And with the decision to, to, to play a part in a movie, it’s the same thing.  It’s never one thing.  It’s never, um, ‘Oh, eh, I do anything for this director!’ or ‘I work for free’ or ‘I don’t care what story as long as my part is big’ or you know, I don’t know, they all have to line up nicely?  And then, that’s where it differs from my analogy – it takes off.  So, so in this case, it’s a story, it’s a lovely part, it’s Alexander Payne, and then you know, that – that’s already pretty good reason. 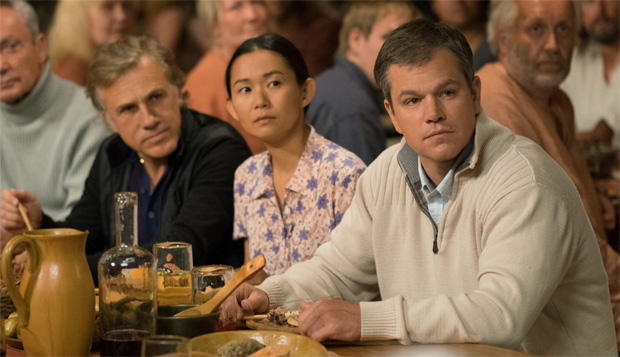 I personally, um, regard filmmakers as artists. And, uh, altruists so to say.  So in a way, I object to the branding of people – an ‘Alexander Payne movie’, which um, which is to suggest that I know what to expect.  You do him disservice.  M-maybe this is the one that you never would have recognized as an Alexander Payne movie?  Maybe it’s something new, God forbid!  You know what I mean?  John Houston made I don’t know how many movies?  And not with one could you have said, ‘It’s like the other.’  Um, the story – story takes the precedent.  And yeah of course people are interested in a certain, um, theme – a guiding theme.  And maybe Alexander is interested in, in the story of the ‘little man’.  Um… Yeah, it’s a valid point to make.  Um, that doesn’t mean you’re supposed to, to expect the story of a little man.  That would be, would be very boring and one thing Alexander’s not boring.

Can you talk about working with Alexander?

Um, same thing.  Mm, actually I, I d- um… It’s, it’s um… the proliferation of pseudo actors talk is something that I object to.  Um, I, I – you know, even actors amongst themselves, you know, when they talk about how it is to work with a director.  It’s, it’s um… usually an agenda.  And, um, it – they will, they will report on their experience.  Which of course by definition is a very definition, um – is a very, uh, subjective point.  But maybe that was exactly what the director was after.  And directors when they’re worth their money are a very wily people.  And um, not to say manipulative.  It’s not all, you know, laid out open on the, on the table, you know.  Put the cards on the table and we all play the same game.  No no – nor should it be, you know, they have their ways and actors usually have their opinion.  That does not mean that those two are congruent.

Although it’s an absurd idea, do you see this film as having a real world message?

Well let’s hope so.  Otherwise it would, w- be a waste of time.  Um… there are, there are, there are movies that are, are… At least they claim to be, uh, ‘innocent entertainment’ not referring to anything.  Even that in itself cannot be true.  The moment it’s shown in public, it refers to public.  Uh, so, so everything if you want to be very, uh, nitpicky about it has a political implication. Even if it’s just the thing in itself that points to the… to the…  to the unfortunate um fact that um people go and see something like it.  But there’s always, there are always implications and, and um… um much f- beyond the immediate now in a movie like that – that’s the intention, so let’s hope so. 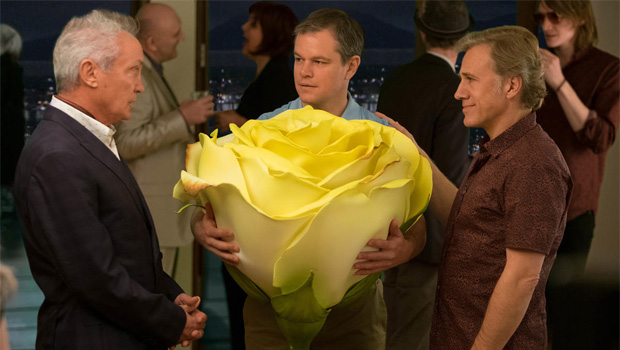 Can you talk about the fact that this film features a wonderful international cast and that it sort of enhances the globalness (of it)?

Well I don’t know that it enhances the global message because a message that is valid globally is not necessarily um, conveyed by global means, meaning very specific messages are the ones that transport themselves the best.  But um, this plays in different, um, different countries and it plays on an international level, if not entirely globally, then certainly – certainly um, um… beyond borders.  Um, and, and since this is the framework for it, why not stay within a certain authenticity and, and utilize what we’ve got?

Can you touch upon the overall production design of the film, with the large and small props?

Mmm, no since uh… I mean it’s no secret that this is uh, the topic.  So… of course you know, you have to see it.  And that’s more or less the long and short of it.

What is the power of satire?

Well that depends on the society.  That depends on the ears that perceive or the eyes that see the, the satire.  Um, in-in a culture that is not used to, to understand irony, satire might be somewhat going into the void.  Um, it’s interesting that in-in-in oppressed societies like the-the, you know, what used to be behind the iron curtain while during their eras of oppression, um, satire becomes a-um, very acutely relevant, uh, medium to transport criticism. Uh, it’s always critically, uh, inclined, satire is.  And, um, criticism is going out of fashion a little bit.  Or let’s say subtle, and entertaining means of criticism are going out of fashion.  Um this is- this is a cultural thing.  And uh in my book, satire, satire is one of the most important, um, vehicles to keep a critical approach to the way we live alive.  It’s been that for the past, let’s say, two and a half thousand years?  That doesn’t mean that it’s gonna continue like that unless we do something about it, so, you know… Thanks Alexander.

I’m from Hawaii and I know from when I worked on “Descendants” and went to the screening there, people didn’t laugh as much, but in LA people laughed a lot because irony is not such a big part of their (Hawaiian) culture.

In-in-in I just know from-from you know, theater in east Berlin was very important.  And they had a code.  And satire, was um… was censored and outlawed so it went just onto a different level.  And um I personally didn’t get it because I was not part of that, of that um, ‘vibe’, literally.  But east Germans picked it up like that!  Um… it was a-a-a satirical element in the production, in the theater, whatever, you know they slipped it in under the door.  And I just didn’t have the sensorium for it, nor did I need to because I was in the lucky situation not to live like that.

What is your hope that audiences take away from the experience of watching this film?

Well, I-I really think movies are about us, meaning us as an audience.  So everybody should have his own takeaway.  Everybody should have his own, eh, thought; his own association, his own worry, consideration, amusement, uh… reflection… projection, hope, fear, um… satisfaction, disappointment… you know, g- but it- it’s only that’s what I meant before, you know, the specificity.  It’s only really great if it’s about specifically, and only, you.

I completely agree.  At the premiere of ‘Nebraska’, someone said that it’s the specific detail that makes it universal.

One last question if you’re comfortable answering – we’re going to do a special feature on environmental issues.

So we’re doing a special on environmental issues.  Is there something that you do to reduce our footprint on the earth?

Absolutely.  Anything else would be… the literal definition of idiocy.  If I think it concerns everyone else but not me, there’s a word for it – it’s egregious. Um, apart from the fact that it’s really stupid.  So um… we c-can continue pretending it depend- it-it-it’s other people’s problems?  Then it will be ours to a degree that we won’t be able to survive.  So what’s a choice?  It doesn’t- you don’t need uh… a very high IQ to put the sum total together, do you? 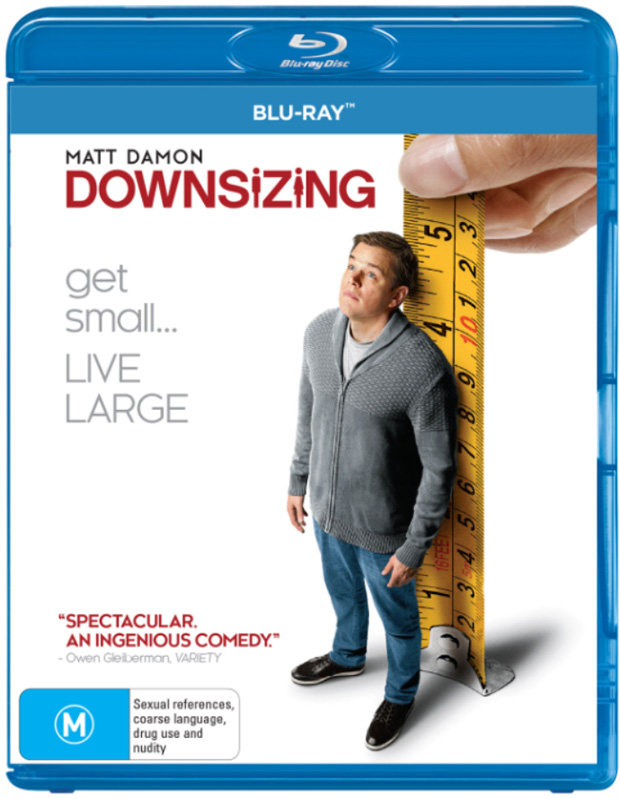