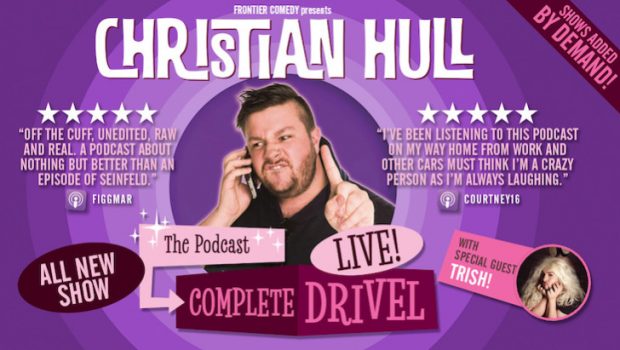 Summary: Christian Hull is one of Australia's most popular podcast and YouTube comedians. His new show "Complete Drivel: Live Podcast" is the stage adaption of the top 50 iTunes podcast by the same name.

Christian Hull is a unique experience, whether it is on stage, YouTube, or his top 50 iTunes podcast. Coming into his show, I had only ever encountered his work via his countless Facebook videos that my wife would sit up watching in bed each evening. Eventually, I found myself watching over her shoulder as Christian spoke his mind on a broad range of every day topics from the annoying people in the supermarket to the many mind blowing realisations we all experience as adults. With each topic, Christian would speak passionately, bringing a comical and highly relatable perspective to the everyday aspects of life. I was furthermore impressed with his alter ego “Trish”, a blond-haired mother of 3. Through her, Christian would perform segmented skits about the ugly but hilarious truths behind motherhood and everyday interactions with other people. Never have I encountered anyone that has been so accurately able to perform comical content that has been derived from a wide range of mundane adult experiences.

With this in mind, I was unsure what to expect during Christians stand-up show, ‘Complete Drivel: Live Podcast’. Not knowing much about his podcast work, I wasn’t sure if the show would be a live recording of his podcast (of the same name) or more similar to the videos that I had come to know him for. In truth, it was somewhere in the middle. Christian opened his show with nothing short of the same level of enthusiasm and energy that of his online material. From the moment he was announced and walked out on stage, Christian opened into a series of entreatingly truthful rants about the many overlooked aspects of day to day life.

Although truthful and entreating as his jokes and stories where, it was slightly obvious that Christian was not accustomed to dealing with a live audience. As he spoke, his interaction with the audience and the manner in which he spoke was more in line with how a group of close friends would speak when catching up. This worked rather well however, as it made both my wife and I feel as if we were old friends with Christian, sitting down with him over drinks to swap stories that others wouldn’t quite understand or find funny. An interesting skill, particularly considering that Christian is not used to doing stand-up. The jokes were made even funnier as Christian proceeded to use a handful of small everyday items as props to further communicate the underlying point of his jokes and strengthen the punchlines.

It should be noted that, due to a lake of experience doing live stand-up, the jokes would quickly jump from topic to topic with no real flow. Often, he’d refer to a notebook for reference as to what story or joke he’d tell next. Yet, as much of a negative as this would seem, it too was part of the evident ongoing ‘in’ joke that he’d created from being able to make his audience feel like they were all friends catching up over drinks.

In summary, ‘Complete Drivel: Live Podcast’ is an insightful and oddly relatable look into the world of Christian Hull. His views on particular members of society are shockingly truthful even if we dare not admit it. However, it is worth mentioning that as family friendly as his videos are, ‘Complete Drivel’ is definitely not a show for minors due to a few ‘C’ and ‘F’ bombs dropped along the way, as well as graphic detail of some of his sexual encounters.

I quite enjoyed Christians show and feel that this is the beginning of a great up and coming Australian comedian. I would highly recommend this show for couples on date night or a group of girlfriends having a night out.