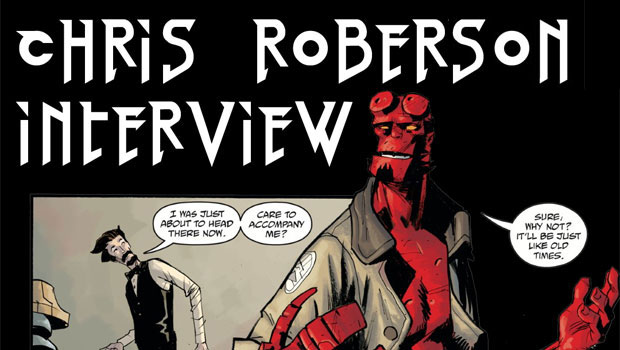 We catch-up with author extraordinaire Chris Roberson to talk comics and of course… HELLBOY!

Welcome to Impulse Chris! Obviously you’ve had a lot of experience writing for the Hellboy universe, is it harder or easier to write for a well established series compared to say your own material?

I tend to approach stories set in the world of Hellboy like they are period pieces anyway, so it’s not all that different from the way I approach writing fantasy or science fiction stories set in the past. The only wrinkle is that in addition to all of the real-world history I’m drawing from, there is the lore and cosmology that Mike Mignola and his collaborators over the years have fleshed out, so there’s more fun stuff to play with.

Forgotten Lives has some nice little call backs to other stories, how hard is it to keep track of all the little elements you can draw from? Do you use some sort of data base or is it kind of more like the giant pin boards with strings linking elements like we see in detective shows?

I keep a LOT of notebooks and stacks of index cards with little bits and pieces written on them, in addition to a lengthy PDF that I’ve filled with panels and pages copied from throughout the whole of the various Hellboy and B.P.R.D. stories to keep the timeline and cosmology of that world straight in my head. I reread those older stories all of the time, too.

What lead you to want to write for Hellboy? Have you had a fascination for the occult and the paranormal or does it simply stem from the fun of working within mythologies?

I was already a fan of Mignola’s work before the first Hellboy miniseries was released, so I was there on day one to pick up the first issue of Seed of Destruction. As a history buff with a weakness for occult detectives and mythology and the like, it always felt like the story was aimed directly at me. I would reread the series in its entirety about once a year on average (which took more and more time as the years went on and the number of trade collections kept growing and growing!), and when I was given the opportunity to pitch ideas for a miniseries set in that world about eight years ago, I jumped at the chance. I’m still a huge fan of these series, only now I’m in the unique position of getting to help explore all of the empty spaces on the map.

Within the “Mignolaverse” there’s obviously a style that ties it all together but within that style there is obviously still some flexibility for creators to put their own mark on the material. Would you say you consciously put your own little “makers mark” in your stories or do you find yourself naturally flowing with the established style?

It depends on the story, really, and on the characters involved. If they originally appeared in stories that Mignola wrote or drew on his own, then I’m often more conscious of trying to maintain a thematic tone or voice to how the character is presented. But if it’s a character that I helped to introduce, then I usually tend to be a little freer in exploring different ways to present them.

That cohesive style obviously shows in the artwork as well, do writers have much say in who they’d like to have working on their story or is that a decision made elsewhere? If you do have a say, who are your “go to” artists to work with?

Sometimes an artist is suggested by Mignola or by our editors Katii O’Brien and Jenny Blenk, sometimes it’s someone that I’ve suggested, and other times it’s a mix of the three. More often than not we’ve agreed on an artist to work with long before the scripts are written, so we try to build the stories to play to the artist’s strengths. Many times a particular artist ends up being associated with a particular character or characters, and we try to bring them back when those characters reappear. But really, I’m just incredibly grateful that I get to work with all of these incredibly talented artists in the first place. I’d worked with Stephen Green years ago when I was first writing Hellboy and the B.P.R.D., so it was great getting him back onboard for “Forgotten Lives.”

How much collaboration goes on between writer and artist in terms of the images shown and the tone being set?

There’s a lot of back-and-forth on these books. The scripts suggest the kind of emotion that we’re going for, and usually there is a fair amount of image reference included about the time and place that the story is set, but then the artist gets to work out how best to get those emotions and ideas across and how much or how little of that image reference to use. Things like the layout of panels and the flow across the page is worked out in thumbnails, and oftentimes the staging of scenes will evolve through that process.

Forgotten Lives references Lobster Johnson and has a really sweet ending that ties into that, is it fun writing about a character that Hellboy is so enamoured with while the Professor continually brushes him off as nothing more than a fictional character? The whole idea of Professor Bruttenholm having no trouble believing all sorts of fantastical beasts and horrors yet having no time for a more “down to earth” superhero is kind of funny.

Well, to be fair, way back in Conqueror Worm it was established that the official stance of the U.S. government was that there was no Lobster Johnson, and Hellboy seemed to be the only one who insisted that he had ever been anything but a fictional character. So Trevor can be forgiven for being skeptical on this one thing!

The father son dynamic is really lovely to read in Forgotten Lives. The conversation in the taxi is a great scene of Hellboy and Professor Bruttenholm sharing their thoughts and feelings, grounding their otherwise extraordinary life in some more every day thoughts… is it hard to find those sorts of moments in among the fantastical or do they in fact come quite naturally and form a great contrast to the other elements of the stories?

Oh, I find that they arise quite naturally. Those characters and their personalities have been so well established over the years that it’s more a question of figuring out what stage their relationship had reached by the time the story is set and letting the emotional stuff develop from there.

Are there any paranormal/mythological stories you’d like to write into Hellboy? I’m still keen to see a good story/movie about the Borley Rectory (the so called “most haunted house in England”)?

There are many, many stories that I would love to tell in the world of Hellboy. I have notebooks full of them, and am always adding new ones. Hopefully we’ll get to all of them eventually!

The last scene in Forgotten Lives gets quite philosophical, as someone who (perhaps foolishly) majored in philosophy it’s been great to see things like The Matrix and The Good Place exploring some deep philosophical ideas… obviously Science Fiction is a great genre for delving into deep intellectual concepts, is that something you try and work into stories or is it more incidental?

Those kinds of moments tend to suggest themselves in the course of the telling, and some characters tend to feel more contemplative than others. Ironically, for a big red guy with a rock hand who spends a lot of time punching monsters, Hellboy is more often than not better suited than most for the big philosophical questions.

Finally I’d like to say a big thanks for the great stories and would like to know if you can tell us what you are currently working on?

I’m currently working on a few different projects set in the world of Hellboy that haven’t yet been announced, some featuring long-established characters and others introducing new characters that Mignola and I have been cooking up. There are more monsters to punch and ghosts to hunt and big philosophical questions to ponder, as always. 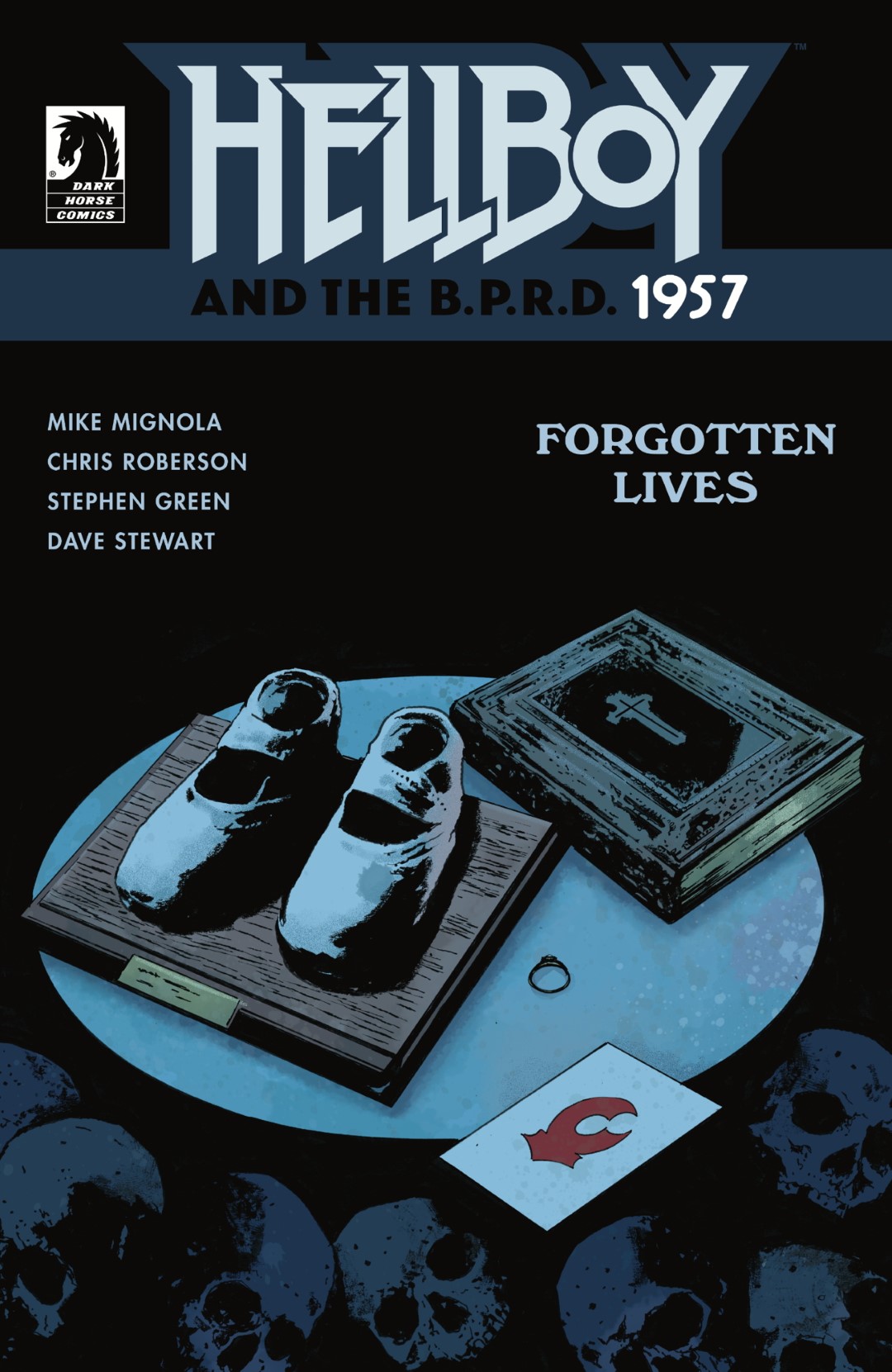 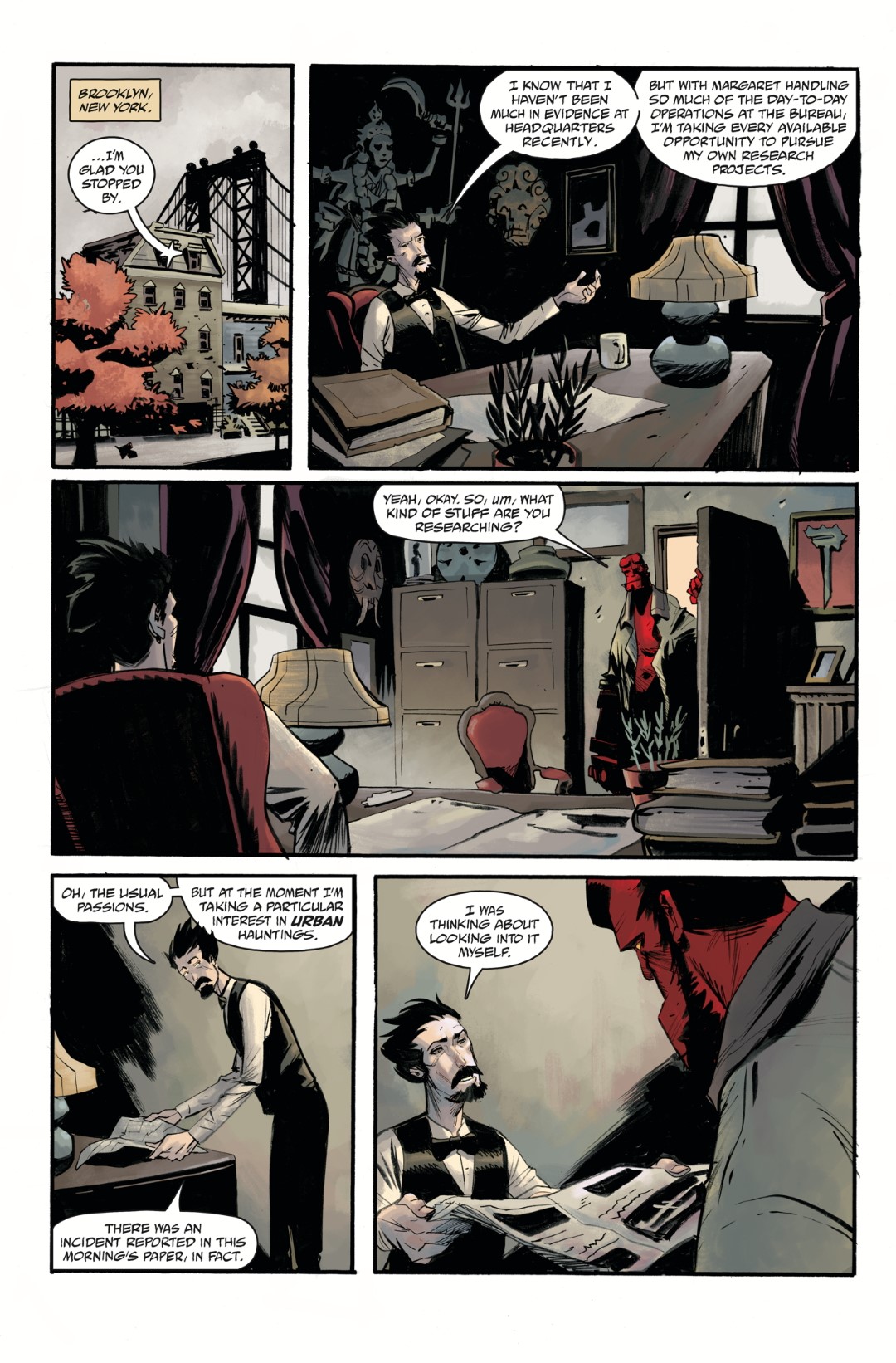 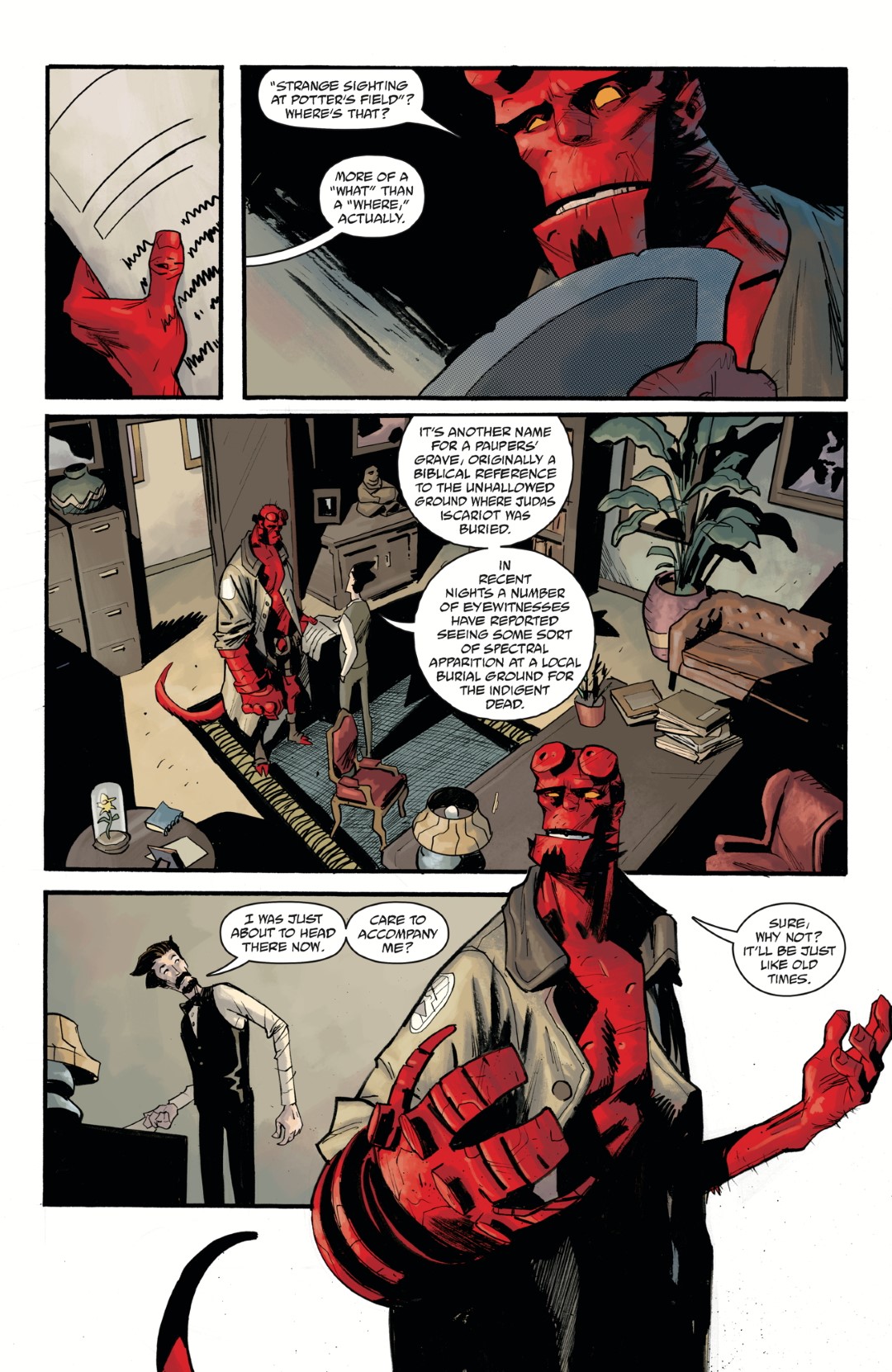 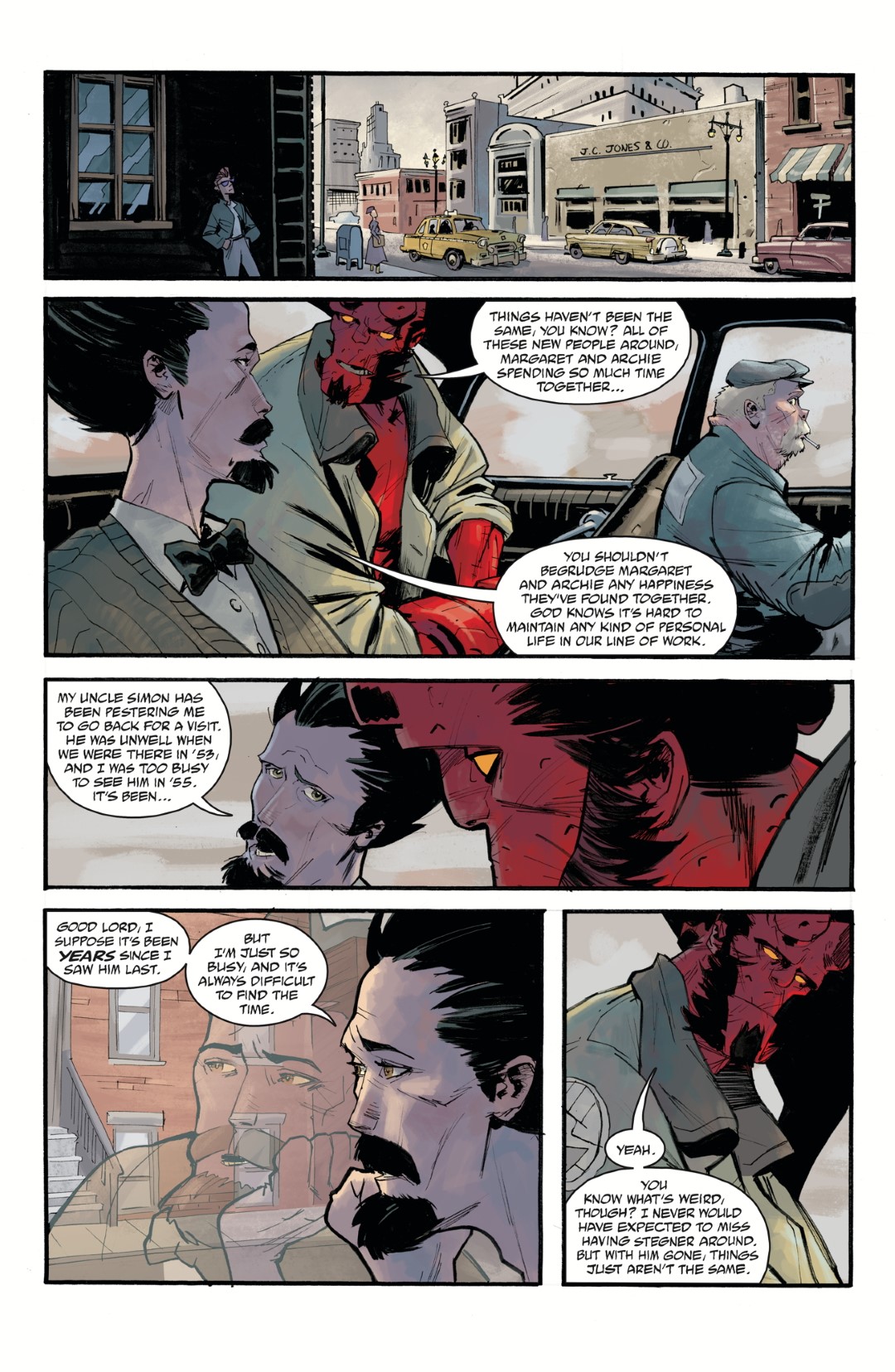 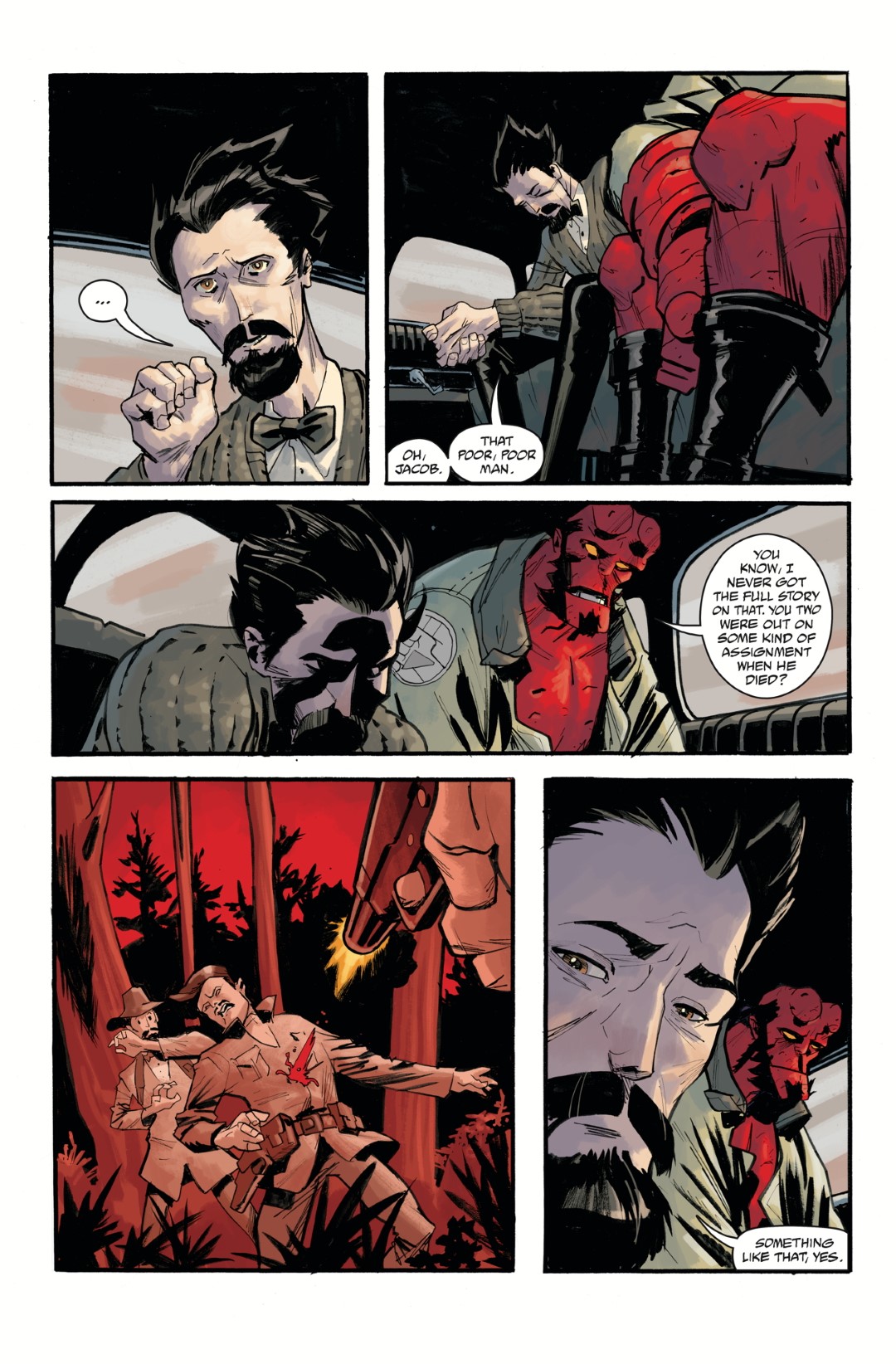 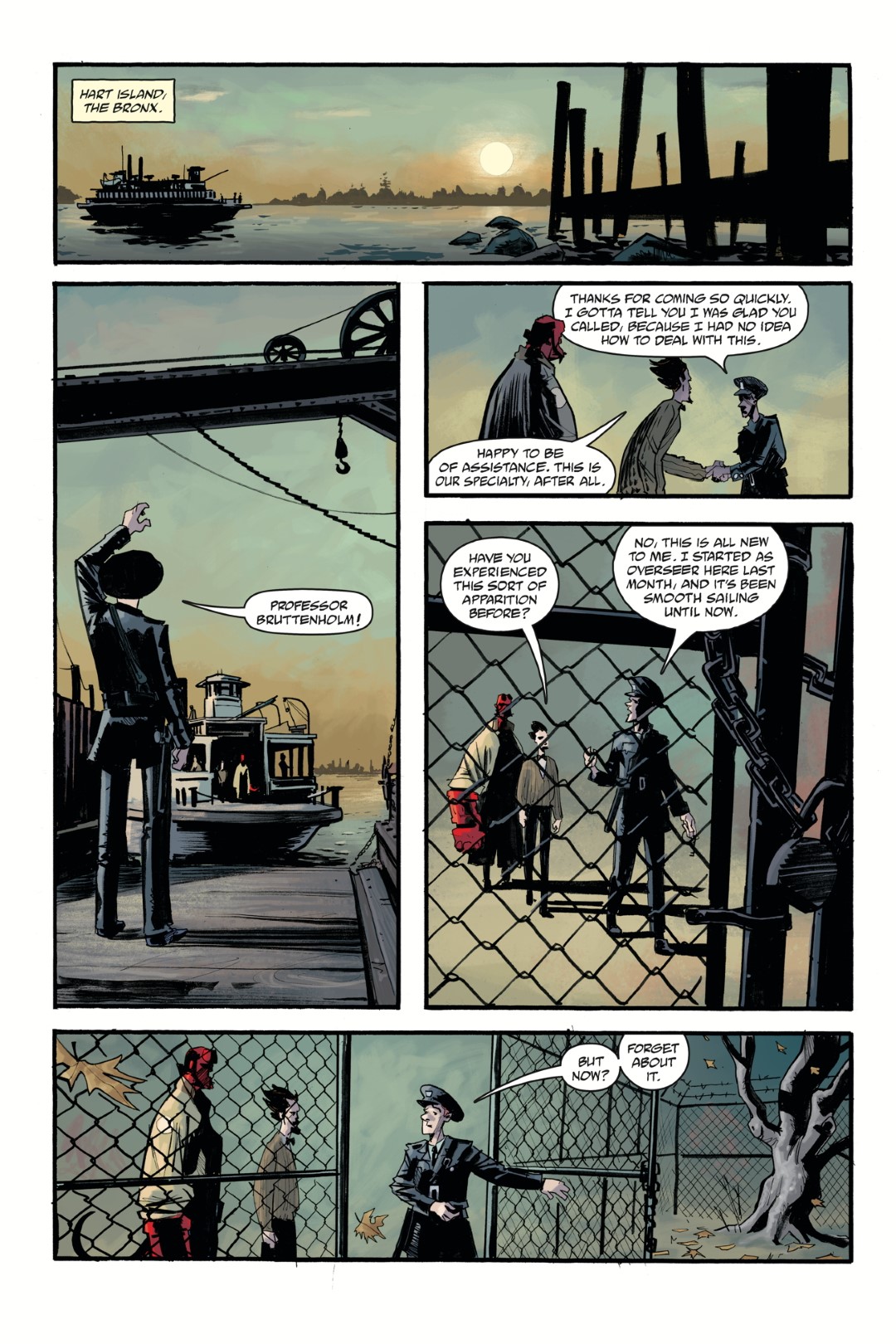