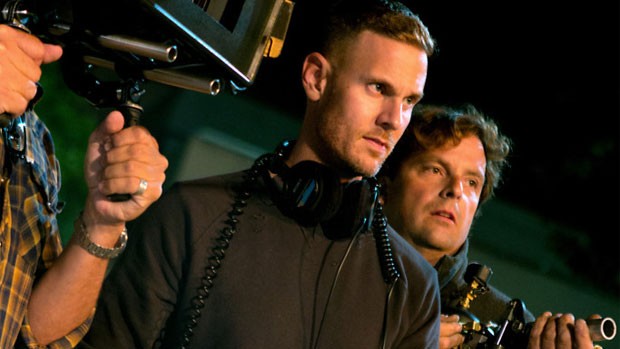 Welcome to Impulse Gamer Chris… so what you brought to Scouts Guide to the Zombie Apocalypse?

When I read the script, I saw an opportunity to make a movie that was very much a throwback to the movies I watched growing up. It was like making an R Rated version of The Goonies or those old school comedy horrors like Gremlins and Monster Squad. Also, the original story had a PG feel to it so I wanted to be a little darker and to appeal to an older audience who enjoyed those films so I went for gore and humour. 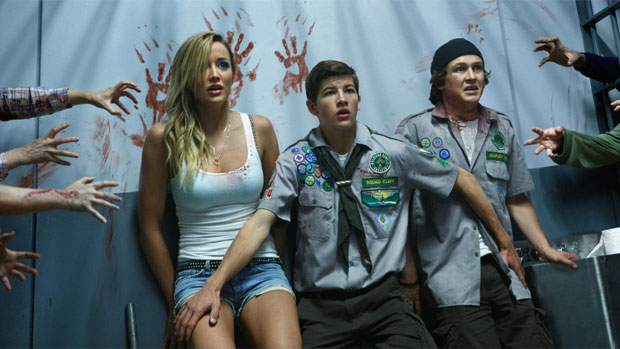 Was it a challenge to transition from horror to comedy?

It never felt like much of a challenge because I think that comedy and horror share a similar architecture with the set up. In comedy you set up a scene to pay off a joke and in horror, it’s the same so you need a good set up to get a good score. As they both have similar patterns of rhythm, it felt kind of natural transitioning from horror to comedy.

My other movies also have a fair bit of comedy in them and my last movie, Paranormal Activity: The Marked Ones, the first 30 minutes of that almost played like a comedy and there’s a ton of humour in that film. So that’s one of the reasons why Paramount brought Scouts Guide to the Zombie Apocalypse to me because they felt that I could handle the comedy so it was a really easy transition. Also, it was really fun to make because you can be so over the top, ridiculous and silly. 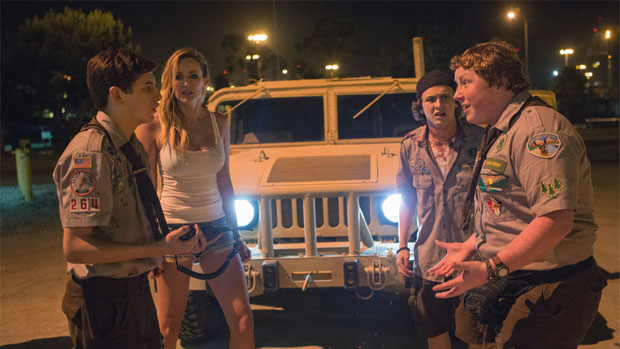 The Zombie “genre” is quite popular at the moment, why do you think fans resonate with shows like The Walking Dead or iZombie?

I believe that people gravitate to this genre because zombies represent our mortality and are a reflection of us. I think that any opportunity that we have to really examine our own deaths from an entertainment point of view is welcomed by everyone. When you go see a monster or supernatural film, there is a certain level of disbelief or disconnect. However with zombies, you’re dealing with human beings or creatures that were human beings.

I think that there’s a certain level of connection that we identify with zombies and then discuss. Also, the zombie genre can examine so many different themes. The Walking Dead has been so successfully because it’s really just a drama but it’s dressed up as a zombie back drop. For Scouts, I was really making a coming of age story that happens to have zombies so I think it’s a really flexible genre and can be told in so many different ways.

You’ve got some amazing young actors in the film, how did you get such a great team together?

First and foremost, you use the script as actor bait and I think that all the actors were excited about the script and found it funny. They knew what tone was needed and understood what I was going for. So that was the first step and the second step is chemistry which is very important.

The first person I thought of for the lead role of Ben was Tye Sheridan and he was someone that I admired. I thought he was fantastic in the film Mud and I knew that he would ground the character as I wanted the lead in this movie to keep things a little real because the concepts are so outlandish. So when I met with Tye, we hit it off instantly and not only was he a great actor but on a personal level, we got along great which is a huge part of it, especially when making a film.

So chemistry is not just between actors, it’s chemistry between filmmakers and the crew because you’re going to be spending a lot of time with these people so you want to like them and feel connected to them and when you do, that shows up on screen. Not only was that important to me but it was important that the actors feel connected to each other as well. I needed them to make you believe that they were friends and what’s where chemistry comes into play. 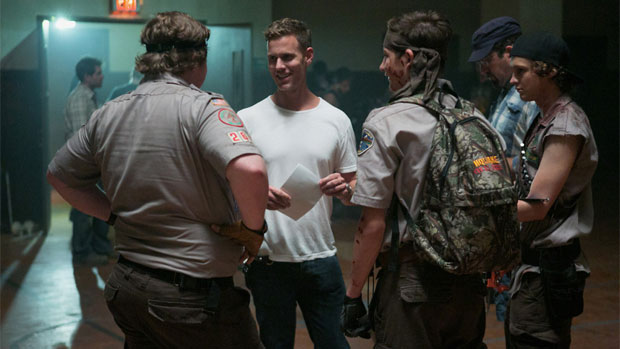 The film also portrays teenage angst and issues quite realistically… how did you nail this realism?

It was there in the script and something I really pushed plus the actors also bring in their own sensibilities and understanding of the characters as well. So that’s why it was critical for me to find people who had a personal connection to their roles and I think they all found a little bit of themselves in their parts because they could relate to that. I think that’s what you see on screen and again, it’s a crazy ridiculous concept for a movie of scouts battling zombies but that’s why it was important for me to have actors who could keep it a bit real so things didn’t get too out of control.

As a director, what was your biggest challenge making the movie?

The biggest challenge we had on this movie was time and I think a lot of filmmakers will complain about that but this was exceptionally challenging as we were trying to cram in so much into a short amount of time because we’re a modestly budgeted movie.

So every day was like a marathon and we were crossing our fingers everyday hoping we got everything right and that was the big challenge for me. But otherwise, everything else (knock on wood) ran quite smoothly and that was only because I was lucky to have an amazing crew. Everyone who worked on this film was fantastic and fun who gave it their all so I was kind of lucky as a director. 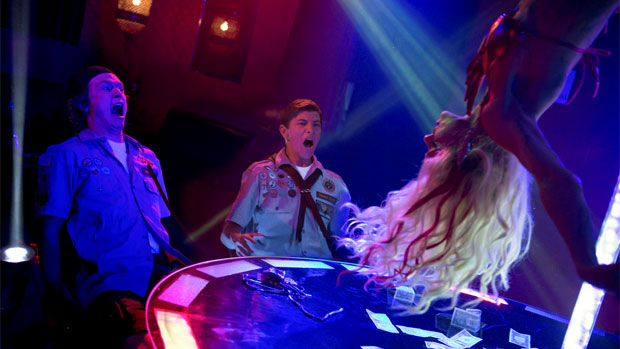 Can you walk us through the special effects?

The effects are split into two camps which are the practical effects that you do on the day like the zombie cat which was a puppet cat. So we had some puppeteers operating the cat from behind the actor. So that’s an example of a practical effect or any other gore like the zombie stripper taking the bottle in her head is all done practically as we’re using like real things.

Then you have the visual effects like CG and we have people involved in that. Each time we want to use this effect, we have people walk us through so they are responsible for all the tracking and green screens plus everything else that goes into the computers. So for me, it makes it a lot easier as I have a pro standing next to me and this how we need to do it in order to achieve the desired effect. 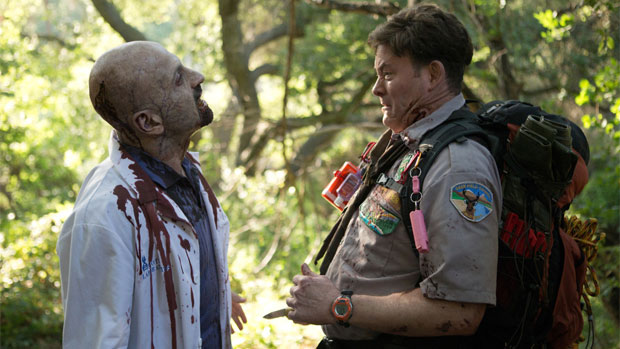 What was it like to film the strip club scene?

It was a blast and first of all, we were in a real strip club! It wasn’t a set so it helped create the feel we needed to have and the production designers did an amazing job to enhance the space for the crew. Also, it was kind of fun to be in a real location because I think it gets the actors into it a little bit more.

So even though we’re doing all this crazy stuff, the only person that had a difficult time was Elle Evans (Amber) who went through hell. It was a very demanding and taxing sequence to shoot and she was such a trooper because she was doing stuff that stuntman do and she was doing it on her own so I really have to give her heaps of credit for all the hard work she put into the role. 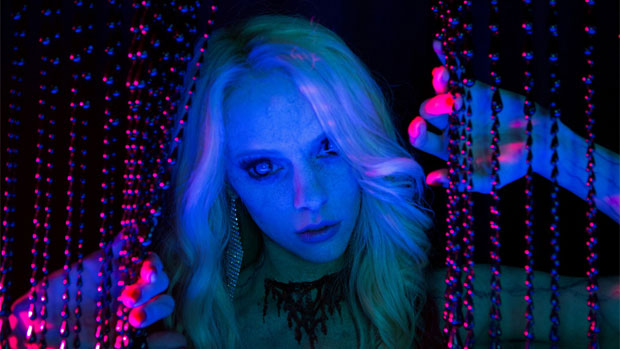 Now that the movie is finished, what was your favourite part?

What I love most about the film ultimately is in a broad sense is that there’s a message that comes across in a really profound and sweet way which goes back to the value of friendship. I also love it so much that it’s couched in such a ridiculous setting and this contrast makes me love it even more.

However in terms of sequences, there’s a 15 minute runner in the movie where we go over to Carter’s house and all hell breaks loose such as the cat sequence and I light up every time I watch it.

Scouts Guide to the Zombie Apocalypse is your first comedy horror… do you want to visit this genre again?

Without a doubt! I would love to revisit the comedy horror genre again because the first one was such a blast to make. However I’m also looking forward to trying new things as well and every filmmaker hopes to challenge themselves that way and work outside the brands they are known for. I would love to make a big cool action movie or a drama.

Thanks again Chris and all the best for Scouts Guide to the Zombie Apocalypse. 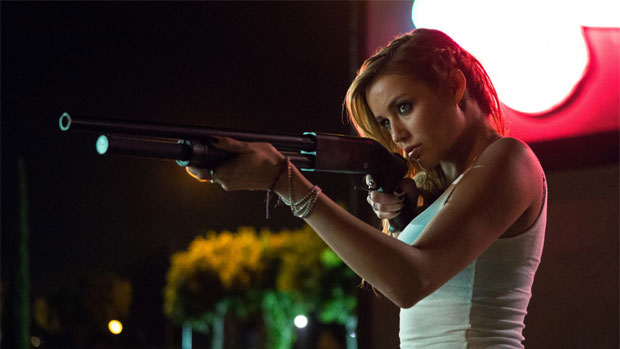 SCOUTS GUIDE TO THE ZOMBIE APOCALYPSE, ONLY AT THE MOVIES NOV 5