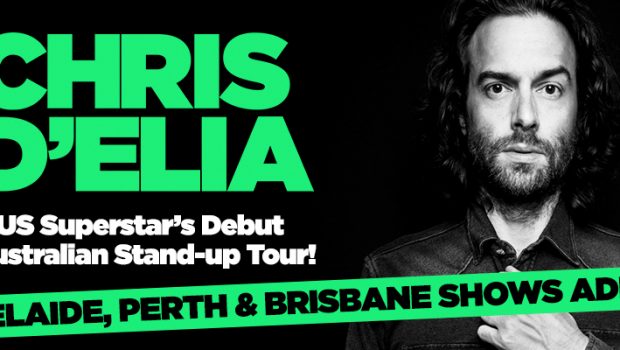 Frontier Comedy are pleased to announce that due to overwhelming demand, Adelaide, Perth and Brisbane dates have been added to US comedian and actor Chris D’Elia’s upcoming debut Australian stand-up tour this October.

In addition to his already announced Melbourne and Sydney shows, D’Elia will now play Adelaide’s Arkaba (Fri 20 Oct), Perth’s Octagon Theatre (Sat 21 Oct) and The Tivoli in Brisbane (Sat 28 Oct). Tickets to these new shows will be on sale at 11:00am AEST.

In further exciting news, extra tickets have just been released to D’Elia’s sold-out show at Sydney’s Factory Theatre on Friday 27 October. These extra Sydney tickets will be on sale at 11:00am AEST through Ticketek.

‘Chris D’Elia is an extremely gifted comedian.’ – Bustle (US)

‘Masterful stand-up…Some of the gems D’Elia delivers will be funny forever.’ – Rare (US)

Known and loved by Australian audiences through his starring roles in NBC sitcom Undateable and Comedy Central’s Workaholics, D’Elia is one of the most sought after comedians and actors in the comedy world.

He has appeared on Late Night with Jimmy Fallon, Boston Legal, Monk, Glory Daze, Live Nude Comedy, @Midnight and Comedy Central Presents, as well as his own acclaimed stand-up specials Incorrigible and Man On Fire on Netflix and White Male Black Comic on Comedy Central.

‘An onslaught of fantastic jokes’ – Bustle (US)

A regular at all the main Hollywood comedy clubs where he performs several times a week, D’Elia frequently sells out tours across the US and Canada. If you’re not already going, make sure you get your tickets quickly and don’t miss D’Elia’s Australian debut this October!

This event is recommended for patrons aged 16+

*Under 18s must be accompanied by a parent or guardian