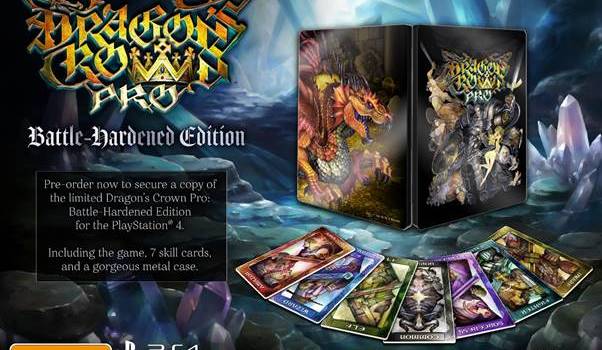 CHOOSE YOUR CHARACTER IN THE NEW DRAGON’S CROWN PRO TRAILER!

When you and your party are being faced down by a pack of vile goblins, how would you proceed? Would you hack them apart limb by limb with your massive battle axe, riddle their bodies with devastating waves of arrows, or chant a powerful magical incantation to blow the entire group to smithereens? Tough choice, I know. Make it easier on yourself by getting a good look at all the playable classes available in Dragon’s Crown Pro in our new Character Trailer!

Exclusive to the west and only available in a limited quantity, the Battle-Hardened Edition of the fan-favourite multiplayer action-adventure game, Dragon’s Crown Pro, brings Vanillaware’s fantastical adventure into your hands as never before. The set includes 7 collectable skill cards representing the 6 different classes plus the common skills, and a shining metal case encapsulating this ultimate package for game collectors.

Dragon’s Crown Pro will be available on the PlayStation®4 and PlayStation®4 Pro on 15th May. The game will be AUD $79.95 and is rated M. For more information, please visit www.atlus.com/dragonscrown.

Atlus U.S.A., Inc. has become known across the industry as a mark of high-quality, deeply immersive, uniquely Japanese video game experiences.  With award-winning titles that reach across a variety of genres and platforms, including the Shin Megami Tensei® and Persona® series of role-playing games, the ground-breaking action-adventure/puzzle game Catherine™, and the much-celebrated RPG Demon’s Souls™, Atlus is committed to offering the highest standard in interactive entertainment experiences. www.atlus.com