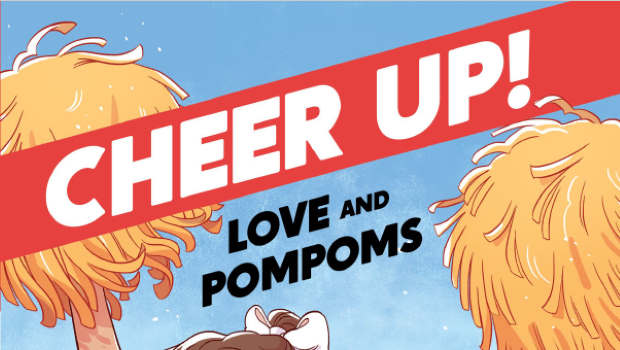 Summary: A lovely addition to the (fortunately) growing list of LGBTIQ+ comics.

Annie is very smart, but she’s not great with people. As a result of her antisocial behaviour she is steered towards joining the cheerleading squad in order to improve here college applications. Bebe is always trying to get along with everyone and must keep her grades up and keep her social life reasonable in order to keep her parents happy and supporting her transition.

There’s quite a lot of ground covered in this story. You could possibly argue that there is too much for the space allotted, but I think the story hitting the ground running and letting things exist from before the first page as just part of what has already happened is fine… once you get into the flow of the story. To be a bit more clear there, the blurb for this comic mentions that Bebe is Annie’s “former friend”… it takes a while into the story before we learn what that’s all about, to start with they seem like they don’t even really know each other. But if you give the story time and then let it infer and imply things, I think it works. I think too often people reading stories or watching movies or TV shows, want everything spelled out… they feel they need to know everything about every character, complete back stories, all possible motivations and I think the desire for all of that can get in the way of just enjoying a story. In this case I let myself go along with it and it wasn’t that far into the story that I found myself getting attached to the two main characters. Some of the dialogue might seem to some as “preachy” or “in your face”… but I think it’s actually done in a way that can point out some approaches that people may not think about. The notion that someone who is transitioning might not want someone to stand up for them… or to stand up for them in a given way. The role of a parent whose child is transitioning… the fears involved in that, not strictly of what transitioning itself entails… but how the world will treat their child and feeling very protective but then also appreciating that they can’t keep their child away from the world to protect them… only provide them with everything they can to be all they can.

The artwork is perfect for me in that it’s nice and clear what’s going on. Clean bold lines make every character stand out and the colours and tones are used in a lovely way to accentuate the scenes. It’s friendly enough to not intimidate anyone which I think will help to make it accessible to a wider audience.

I think it’s a lovely story and well told. The characters are fun and I felt connected to them enough to make their arcs hit home. If I was going to be really specific I’d say look out for the moment at the dance when someone comes up to Bebe to tell her something… that may have brought a tear to my eye.
For anyone who enjoys a good story with a bit of romance I think this is an excellent purchase… it may be hard to find though as it seems it’s already sold out. Not bad for something that isn’t out until August!