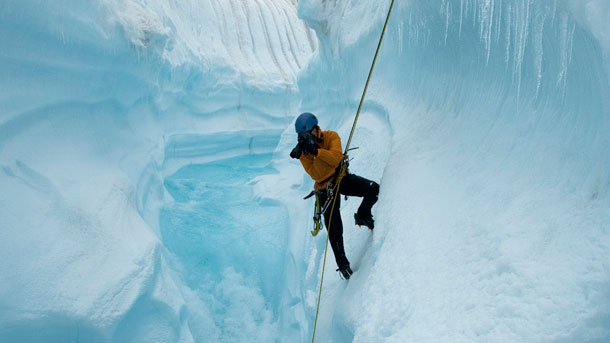 Summary: Although Chasing Ice has a powerful message, it is also an amazing piece of photography that should be watched by everyone. Recommended

Chasing Ice is a powerful documentary that follows National Geographic photojournalist James Balog who focuses on the dramatic impact of climate change on planet Earth. What I enjoyed about Chasing Ice is that the protagonist of the documentary, James Balog was actually a sceptic about climate change, however his scientific opinion soon changed during his first visit to the Arctic which definitely opened his eyes to this world-wide problem. Balog also lends some credibility, not that it was needed to the documentary as his scientific background was geology.

As we follow Balog’s investigation with his Extreme Ice Survey, he gives the viewer some damning evidence about mans involvement in the destruction of glaciers around the globe. Seeing the evidence presented in this documentary is quite captivating, especially the interviews and footage of glaciers shrinking in size.

If mankind does not address the issue of global warming, it is quite damning what the future holds for man and more importantly, the life on planet Earth. Even though this documentary may seem like all gloom and doom, it does reiterate the message that not everything is lost and there is still a chance that we can stop this disaster from happening. Then you have the amazing cinematography that really showcase these amazing glaciers that is a joy to watch and looks amazing on Blu-ray

The video quality of Chasing Ice is quite stunning and is presented in an aspect ratio of 1.78:1 that boasts sharp images, deep blacks and vibrant colours. At times, the presentation almost looks 3D thanks to the amazing cinematography. There are some issues however with artifacting but for the majority, the video quality is definitely above average. Audio supports a DTS-HD 5.1 track which provides exceptional audio quality, especially in relation to the speech and moving soundtrack which really lends itself well to the message behind this documentary.

Although Chasing Ice has a powerful message, it is also an amazing piece of photography that should be watched by everyone. Recommended