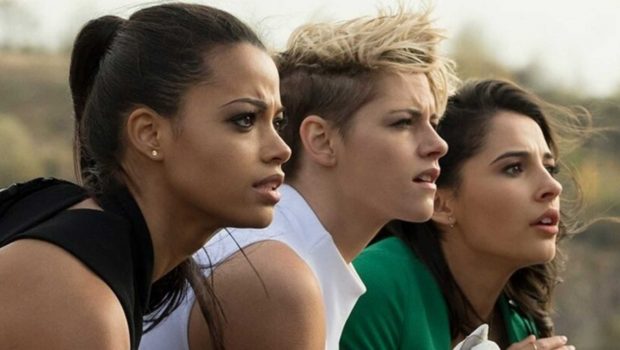 Another year, another reboot. When Hollywood seems devoid of new ideas, the studios rehash old properties in any way they see fit. You guessed it! It is now time to reboot Charlie’s Angels, the hit film series based on the beloved 1970s television show. But, and this is a very big but (pun intended), this film does seem promising on paper. It is written and directed by its co-star, Elizabeth Banks. She has been a fixture in comedies in terms of acting, writing, and directing. She has said in interviews that the reboot has covert feminist ideas interspersed throughout, which promises a new viewpoint in contrast to the previous outings, Charlie’s Angels (2000) and Charlie’s Angels: Full Throttle (2003), which were directed by McG.

Banks’ film stars a promising trio of lead actresses, including newcomer Ella Balinska, rising star Naomi Scott, and Kristen Stewart. Naomi Scott is fresh from the blockbuster hit Aladdin (2019) and the underappreciated Power Rangers (2017), in which Banks was her co-star. The renowned Stewart returns to commercial filmmaking after several years of indie/international darlings that have seen her garner critical acclaim. The film does not retcon events or characters from McG’s films but exists in the universe. This may sound insignificant but to this reviewer a franchise that keeps the cards it is dealt, no matter how bad the hand, is honourable. An example is how the two Creed films accounted for all the Rocky sequels. With its talented stars and Banks’ guidance, will Charlie’s Angels fly again and be an enjoyable reboot for fans and newcomers?

Naomi Scott plays Elena Houghlin, a talented scientist involved in the development of new technology that will revolutionise how we live. It is a new synthetic artificial intelligence called Calisto. After attempting to highlight major security flaws in the technology, such as it being weaponised via electromagnetic pulse, her findings fall on deaf ears. Instead, Peter Fleming (Nat Faxon) is secretly taking credit for marketing the technology. Elena has no choice but to blow the whistle by providing evidence of her findings and research. While unknowingly targeted by an assassin named Hodak (Jonathan Tucker), she is saved by two literal Angels. Sabina Wilson (Stewart) is an unruly, rebellious woman whose rich lifestyle has led her down many dangerous paths. While June Kano (Balinska) is a focused, disciplined former MI6 agent whose past decisions have left her with regrets. Sabrina and June work for the Townsend Agency, which is named after its head honcho, Charlie Townsend. The agency provides security and superlative investigative skills to private clientele. With Elena on the run, the Angels must reclaim the technology, uncover the mastermind, and protect the innocent. They are led by Susan Bosley (Banks) who is one of many Bosleys around the world.

While Bank’s direction is inconsistent in the realm of blockbuster filmmaking, Charlie’s Angels succeeds due to several impressive feats. It is buoyed by the cast’s chemistry, enjoyably campy performances, surprising twists in the lore, and clever feminist subversions of female roles in action films. However, it fails to soar due to the action sequences. The chase and heist sequences are fun and are executed with flair, especially when the final act embraces its own campiness. Yet the other fight scenes are choppy and too tightly framed to be impacting. They improve when focusing on Balinska who impressively performs her own stunts. 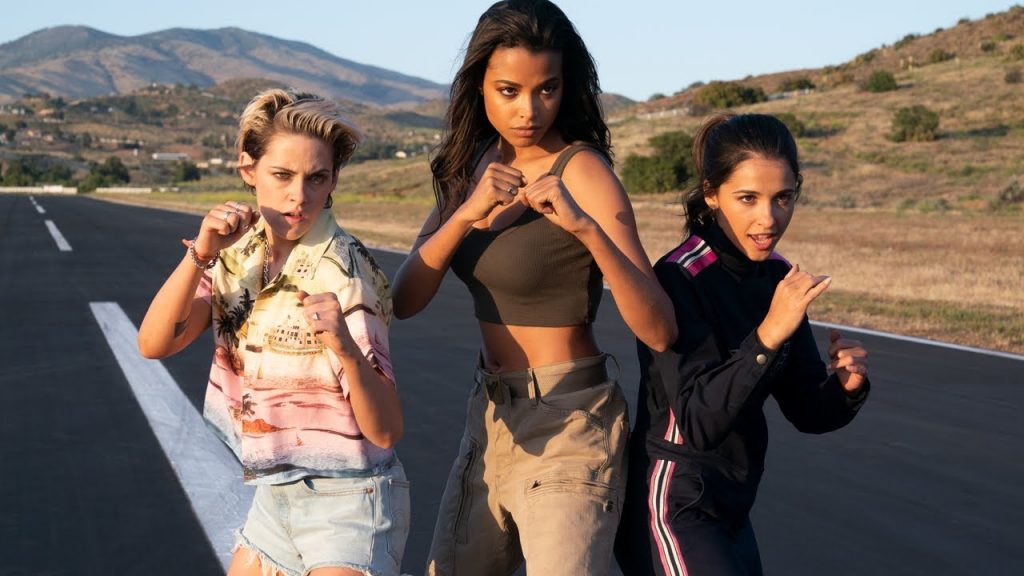 The story by writers David Auburn and Evan Spiliotopoulos is also mundane. The use of a weaponised MacGuffin device ensures it unfolds predictably. Similarly, not all the gags succeed, such as a skit involving a security guard’s death played for laughs. Fortunately, Banks’ passion shines and pays off in unexpected ways. She has played every Hollywood role assigned to an actress, whether it is comedic or dramatic. She fittingly exposes the flaws and bias of Hollywood’s use of women and easily exploits them for all they are worth. She also diminishes the male gaze through the characterisation of her leads. She portrays them as human beings having fun, being the best that they can be, and acting out of love and friendship. Furthermore, she subverts how women are portrayed as on-screen action heroes. Elena is enthusiastic and excited about participating in the action with the Angels after being sidelined for her own safety. The scene looks to end in an obvious ploy for empowerment, but the conclusion and restraint is unexpected and very funny.

Stereotypes are also amusingly subverted through clever casting choices and Kym Barrett’s costume design. Where else would you see Noah Centineo (Netflix’s The Perfect Date, 2019) as an assistant scientist? Another scene parodies age and generational gaps between Banks and the Angels in a funny, pop-culture inflected way. It serves to highlight stereotypes on film and social media. Meanwhile, the film’s introduction is also subverted. The Angels films usually open with Charlie narrating the titular three and what makes them special. Instead, Banks employs a montage of many women of all ages performing impressive but realistic feats. She implies that any woman can be an Angel. Without being heavy-handed, she makes her film enjoyably feminist all in the name of good fun. 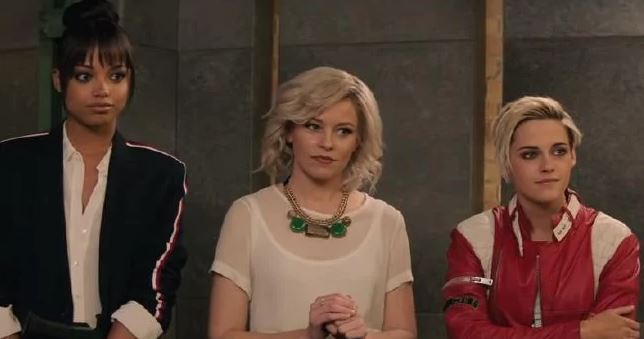 Although subversive, Banks’ love for the franchise and its lore is amusing and honours the series. Whether it is showing the costumes featured in McG’s films or referencing how the Angels communicate with each other quietly via Morse code, Banks never dispels the lore’s inherent campiness. She balances the camp aspects with the world-expansive espionage that is popular in blockbuster filmmaking. Other changes prove worthwhile and the franchise’s potential expansiveness is underlined through key story points. For example, there is the international expansion of the Townsend agency, which introduces more Angels and different Bosleys. Even the designated Q‑esque character is amusingly subverted as someone who makes fun of the hipster well-being image, via Luis Gerado Mendez’s fun performance as the Saint.

The performances of the cast are a lot of fun and translate well to the screen. Scott, diverting from her headstrong roles, plays a fish-out-of-water character who gradually receives a taste of becoming an Angel. She is prepared for the physical comedy and executes this element well. An amusing highlight is her fighting an armed guard using office props as weapons. Stewart, mostly known for sullen, soulful roles (even in comedies) is a pleasant surprise as Sabina. Gleefully acerbic, rubber-faced, and hilariously bizarre in her enthusiasm, Stewart accomplishes the role with utter aplomb. She delivers comedic zingers with perfect timing and excels at physical slapstick. The film’s MVP is Balinska as June. She possesses a fantastic screen presence, magnetic on-screen charisma, and believable action chops. Additionally, she adds weight to the drama, including her character’s backstory. The trio’s chemistry is infectiously sweet, funny, and, best of all, genuine. 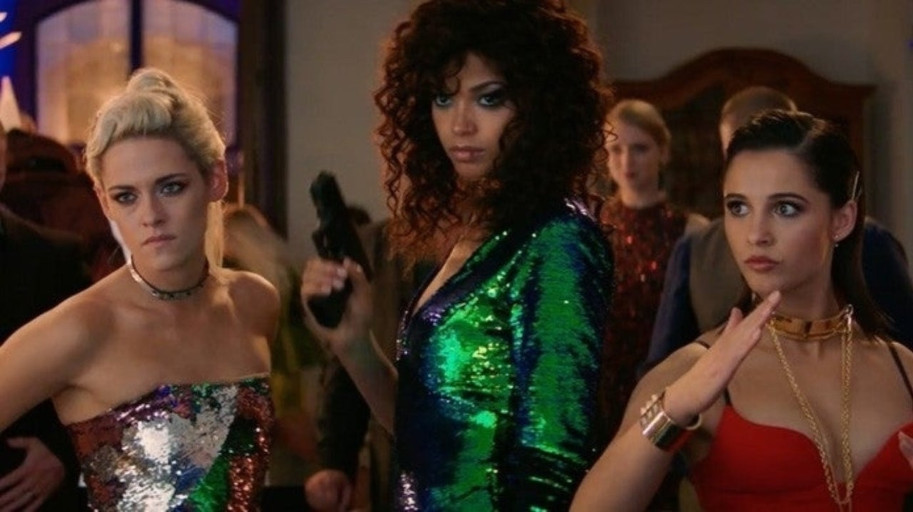 The dedication of the supporting cast adds colour and fun to the film. Banks is enigmatic and paternal as Bosley, while Tucker exudes solid menace as the taciturn terrorizing henchman. On the campier side, Sir Patrick Stewart is an absolute joy as the original Bosley and Chris Pang plays Aussie Jonny (no, that really is his name) so crooked that he needs a corkscrew just to put on his pants. He successfully oscillates between a flirtation device and a punching bag. Sam Claflin pulls a 180 from his reprehensible bastard role in The Nightingale (2018). Instead, he plays a weaselly, cowardly Zuckerberg-esque shell of a man who screams like a banshee on helium.

Charlie’s Angels is an imperfect but worthy continuation of a franchise with plenty of creative juice remaining. It delivers due to wonderful camaraderie, Banks’ passionate direction, and an overall sense of fun that leaves you wanting more from the series. If you stay for the end credits you will also see several welcome cameos. Though your mileage may vary because of one exception. Regardless, it hints at the enormous potential and bright future of the series.

Summary: An imperfect but worthy continuation of a franchise with plenty of creative juice remaining.