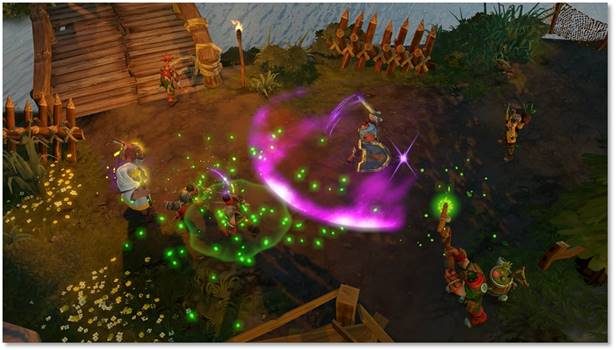 The demo allows players to enjoy up to two hours of gameplay and start their epic journey to free Anteria. Players will command Vargus the Knight, Nusala the Archer and Anslem the Monk – three of the five Champions available in the final game. Each of these powerful Champions skillfully wields one elemental power – metal, nature and lightning respectively. Players must make astute use of their three Champions to leverage the most efficient element against each opponent. The strategic combat system also uses an active pause mechanic to help players take their time in battle, allowing them to pause the game at any time in order to adapt their playstyle and carefully plan their moves.

In this free demo version, players have the opportunity to access two of the three environments – Greenland and Desert – both of which are filled with fearsome enemies. The bravest heroes will face off against the ruthless Nuaba, the Dune Queen. During each round, players choose a mission in one of the available territories and must decide to either free a new territory or defend one of their own, making every adventure unique. Players can try a different path to victory each time they restart the demo from the beginning. Between missions, the home-base management system allows players to train their Champions and craft powerful new weapons, gear and all sorts of items that will help them on their journey.

Additionally, players are able to choose from three difficulty modes to put their skills to the test.

You can download the demo for free at: https://club.ubi.com/

For more information about Champions of Anteria, please visit: https://www.ubisoft.com/en-AU/game/champions-of-anteria/