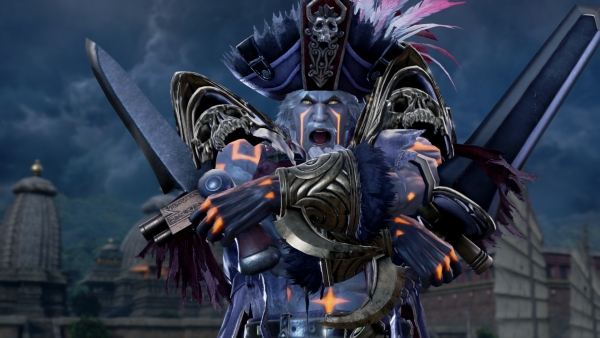 CERVANTES RETURNS TO THE BATTLE IN SOULCALIBUR VI

BANDAI NAMCO Entertainment Europe is pleased to confirm one of the most iconic characters of the franchise, the ghostly pirate Cervantes, returns to fight in SOULCALIBUR VI – launching on October 19th 2018 for PlayStation®4, Xbox One and PC Digital.

When Cervantes first gripped Soul Edge, the power of the cursed sword transformed him into a monster. He used the sword to bring a reign of carnage around him as it manipulated his mind. But soon the cursed sword’s plans were thwarted by a ninja and a warrior. Cervantes was defeated, consumed by the fires of hell, and his body turned to ash. One day the new owner of the sword, Nightmare, came to investigate Cervantes’s remains, but left without noticing the small glimmer of light emitting from his body. Soul Edge once again set the terrible wheels of fate moving and brought back Cervantes from the dead.

After his resurrection, Cervantes walks grinning through a sea of corpses, claiming countless souls wherever in his wake. His final aim is clear: to once again seize Soul Edge as his own.

Cervantes fights with two weapons, Acheron and Nirvana. His main sword, Acheron, has been his sword since he plundered it from its hapless former owner, sometime during his reign of dread across the Atlantic Ocean. His secondary weapon, Nirvana, is a dagger with a pistol in the hilt. While pistols of the time were still relatively unimpressive, shooting an opponent could open up a gap in their defense, allowing for a fierce follow-up blow. The gun dagger was a gift from the Italian weapons dealer Vercci and symbolizes the twisted connection between the feared pirate and the Merchant of Death.