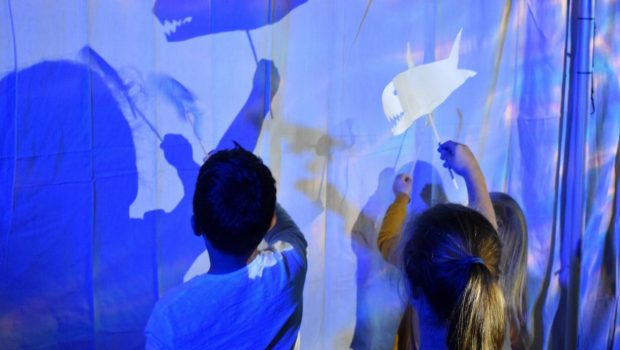 Combining puppetry, song, shadow imagery and sound, Cerita Anak (Child’s Story) places children at the heart of the story by inviting the audience, young and old, to be passengers on this adventure on the high seas. Aboard a large boat, participants are rocked and rolled across a strange ocean before they dive to the bottom of the sea, hear stories on the wind and in the currents of the water, and face great danger before coming to safe harbour. The show bustles with all the life of the ocean – from the fish below to the birds above – while evoking the majesty and mystery of the sea itself.

Polyglot Theatre and Indonesia’s Papermoon Puppet Theatre have been working together since 2008. In May 2015, they developed Cerita Anak (Child’s Story) in Lasem, a small fishing village with a remarkable history on the north coast of Java. Lasem was an important port, with many Javanese boat factories in the area. Hundreds of boats are now buried in the Javanese sea following the events of World War II. The history and mythology of this town played a key role in the inspiration of Cerita Anak (Child’s Story) as both companies collaborated with the local community to weave these stories into the work.

“The world we will create for our audience will encompass the senses, surrounding them with images, sensations, smells and texture that will transport them to another time and place and situation,’’ says Papermoon Puppet Theatre founder and co-artistic director Maria Tri Sulistyani.

“Because this work is an experience where the audience are participants, it will constantly evolve and change – a real adventure for us as creators. We have woven the history of Lasem into a young boy’s true tale of arrival to the shores of Australia and through this we explore how people will sacrifice almost anything to make their children’s future a better one,’’ says Polyglot Theatre artistic director and co-chief executive Sue Giles.

Empowering its young audience as they navigate the high seas, Cerita Anak is also a timely reflection on the refugee experience and the history of the region.

Papermoon Puppet Theatre is a contemporary puppet company in Indonesia which creates theatre works, site-specific performances and workshops as well as coordinating the International Biennale Puppet Festival in Yogyakarta. Polyglot Theatre is Australia’s leading creator of interactive and participatory theatre for children and families.