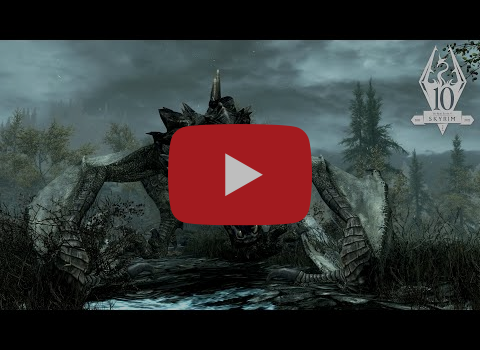 November 11 marks ten years since the launch of The Elder Scrolls V: Skyrim. Today we celebrate with our community around the world as we reflect on a decade’s worth of memories, memes, and epic adventures. The anniversary is also a time to look ahead at the new journeys and experiences that await players returning to the world of Skyrim.

Today’s celebration includes something for every Dragonborn. To start, we invite fans around the world to celebrate the sounds of Skyrim with a once-in-a-lifetime performance by the London Symphony Orchestra and London Voices. Tune in on the official Bethesda YouTube and Twitch channel for this must-watch event.

The celebration continues for all current and future Skyrim Special Edition owners as we give away four free Creations including new quests, items, Survival Mode, and fishing — all available today! Finally, The Elder Scrolls V: Skyrim Anniversary Edition is now available and comes bundled with new and all previously released Creation Club content to date, making it the most comprehensive version of Skyrim ever.

And read on for the full details of today’s celebration and all the content arriving in Skyrim.

Skyrim Live in Concert
Experience a once-in-a-lifetime musical event as the London Symphony Orchestra and London Voices perform the sounds of Skyrim at the historical Alexandra Palace Theatre. Tune in on the official Bethesda YouTube or Twitch channel and take in a tribute to the many anthems, ambient soundscapes and memorable tunes of Skyrim as we celebrate those who’ve made the game what it is today: the players.

Originally released in 2019, this Creation introduces an additional storyline across two quests (complete with side quests) for players to delve into. With additional armour sets, weapons, enemies and much more to discover, Saints & Seducers features some of the largest amounts of content we’ve ever packed into a single creation.

Included as part of Saints & Seducers, the Rare Curios Creation brings additional goods imported from all over Tamriel to Skyrim’s Khajiit Caravans. So long as you have coin, these merchants can supply you with all sorts of useful wares, including ingredients to concoct special potions, arrows, and poisons.

Previously released in 2017, the Survival Mode Creation has your Dragonborn contend with the very elements of Skyrim itself to survive! Players must wear warm gear and seek shelter in cold climates to keep from freezing to death, as well as mind their hunger and exhaustion on top of the usual threats like pesky bandits and ambushing dragons. Survival Mode offers a fresh challenge and a new way to experience Skyrim for returning and new players alike.

Skyrim’s all-new Fishing mode Creation lets you angle over 20 unique aquatic species across the area’s many bodies of water. Cook your catch for a meal, display it as trophy in your den or even keep it inside your own home aquarium. With many of Skyrim’s fishing spots located in the region’s most breathtaking and tranquil spots.

Players will also be able to enjoy an all-new batch of creations, including new ways to play and new quests tapping into Tamriel’s history. In ‘Ghosts of the Tribunal’ you’ll earn over a dozen new weapons and armours previously featured in The Elder Scrolls III: Morrowind, while ‘The Cause,’ has players encounter the Mythic Dawn, who aim to form a new Oblivion gate, and features brand new enemies, locations, and weapons – not to mention a conjurable Daedric horse! This is just some of the amazing new content releasing in November to mark the 10-year anniversary.

For all information on the tenth anniversary of Skyrim, including the Anniversary Edition, please visit: www.skyrim10.com