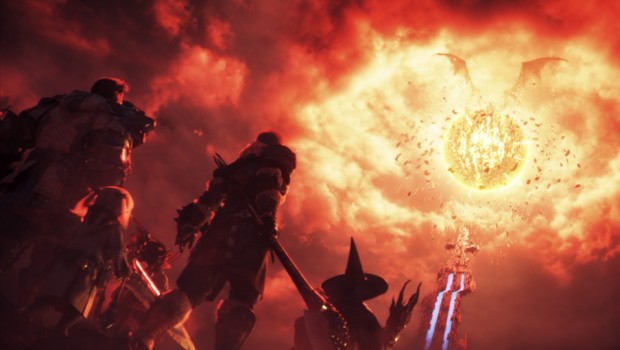 CELEBRATE ALL SAINTS’ WAKE WITH FINAL FANTASY XIV: A REALM REBORN PLUS WORLD TRANSFER AND MORE

From October 18 through to November 1, enjoy All Saints’ Wake as the streets of Eorzea are decked with ceremonial lanterns and fanciful costumes can be enjoyed by all. A travelling circus troupe has made its way to the city-states, appearing overnight, as if by magic. Speak to these Shifty Thespians for a special Quest, but never forget that All Saints’ Wake is a time for tricks as well as treats.

We’re also pleased to announce that the free World Transfer Service starts tomorrow until Sunday 21 October. Like the name implies, this service allows you to move your character to the World of your choice*. So if your friends are playing in a different World, this week is the perfect opportunity to arrange playing in the same World. For more information on World Transfer please visit The Lodestone to read the guidelines and then proceed to the FINAL FANTASY XIV: Mog Station.

At Tokyo Game Show last month the latest Letter from the Producer was held as a live event for attendees. Lots of exciting new information was revealed about the next major content update that arrives later this year, including videos and further detail on The Wolves’ Den that will serve as the centre for PvP battles in Eorzea and a video that showcased some of the many customisable options that will be available with the addition of player Housing.

Alongside The Wolves’ Den PvP Battles and Housing, there’s a whole host of other features and content being added to the game later this year. There’s the new Primal Battle: Good King Moggle Mog XII, Extreme Mode Primal Battles, new Dungeons including Pharos Sirius, Treasure Hunting, Hard Mode Boss Battles, Beastmen Daily Quests and The Crystal Tower that fans of FINAL FANTASY III will be eager to visit. More details about the content update including its title will be announced at a later time.

Last but certainly not least, during Tokyo Game Show, Producer Naoki Yoshida revealed the incredible news that FINAL FANTASY XIV: A Realm Reborn has quickly grown to over 1,000,000 players in the first month since launch and it’s continuously growing. Square Enix and the entire FINAL FANTASY XIV team would like to say a massive thank you to all the players that have joined us in Eorzea on this remarkable adventure.