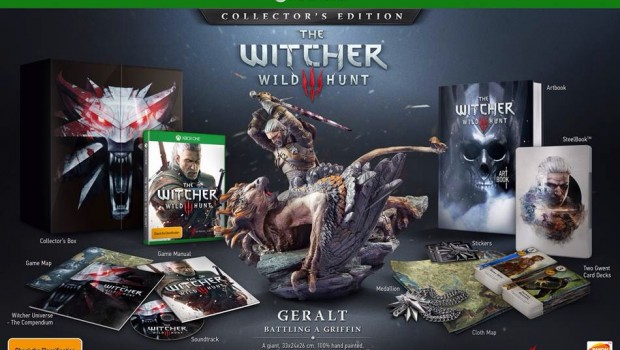 CD PROJEKT RED, the developer of the critically acclaimed Witcher series of games, is excited to announce Gwent, a card game experience embedded within the upcoming open world fantasy RPG–Witcher 3: Wild Hunt. The studio is also thrilled to reveal the inclusion of additional physical content in the Xbox One Collector’s Edition of The Witcher 3: Wild Hunt.

Gwent is a fast-paced card game that can be played within The Witcher 3: Wild Hunt on every platform. Invented by dwarves and perfected over centuries of tavern table play, Gwent is a game of initial simplicity and ultimate depth, something beloved by both road-weary travelers during long nights around the campfire and elegant nobles looking to liven up dragging dinner parties. The game is about the clash of two armies locked in mortal struggle on a battlefield where the players are the leaders and the cards their forces. With four different factions offering unique combat styles and endless paths to victory, Gwent is every adventurer’s first choice when it comes to one-on-one card-based dueling. Take risks and think on your feet, strategize and deliver cunning combos, use potent magic and mighty hero cards and be the last one standing on the field of honor!

Key Features:
– Over 150 unique playing cards
– 4 distinct factions: the mighty and cunning Nilfgaardian Empire, the brave Northern Realms and their siege weapons, the agile and devious Scoia’tael, and the brutal monsters of No Man’s Land.
– Powerful spells allow players to control the weather and affect units on the battlefield.
– An array of combat styles caters to individual playstyles: close range with heavy knights, long range with skilled archers or artillery with powerful siege weapons.
– Powerful hero cards, unique to each faction.

The studio has also announced the inclusion of additional physical content in the Xbox One Collector’s Edition of The Witcher 3: Wild Hunt–Gwent, a highly addictive card game, and a unique cloth map of the in-game world.

The Xbox One Collector’s Edition of The Witcher 3: Wild Hunt now contains:
· The standard edition of the game, containing: the official soundtrack, a beautiful and detailed map of the in-game world, unique stickers, and the developer-created “Witcher Universe – The Compendium”
· A giant, 33x24x26 cm, 100% hand painted, Polystone figure of Geralt of Rivia battling a Griffin
· An exclusive, collector grade Witcher medallion
· A one of a kind SteelBook™
· A two-hundred page artbook, containing breathtaking art from the game
· A cloth map of the game world
· Two Gwent card decks
· Huge outer and inner Collector’s Boxes you can store your Witcher merchandise in!

“Gwent is an amazing game and we’re really happy to be able to bring it to the physical realm with Microsoft’s help. Now we’ve got Gwent in every copy of The Witcher 3: Wild Hunt as an in-game experience for free on every platform, and a physical version in the Xbox One CE, how awesome is that?” said Marcin Iwiñski, CD PROJEKT RED Co-founder and Joint CEO.

Gwent will be available as an in-game experience for everyone who purchases and plays The Witcher 3: Wild Hunt. The physical representations of two in-game decks are exclusive to the Xbox One Collector’s Edition of the game. The Witcher 3: Wild Hunt will release in Australia and New Zealand on the 24th February 2014 on Xbox One, PS4 and PC.